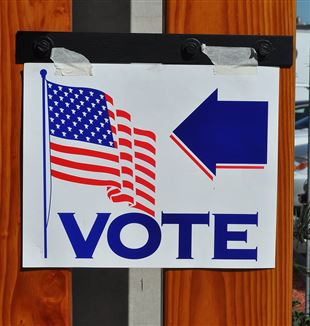 This lack of interest has roots in the American spirit itself, which has always harbored an intense mistrust of politics. When national security has been perceived as threatened, most Americans have indeed responded to the challenge. In this election, however, national security is not perceived as threatened by most Americans, except by those at the fringes who will vote for either Pat Buchanan or Ralph Nader, because they are convinced, for whatever reasons, that globalism threatens American sovereignty. (Some assert that this trend will continue, and will indeed become a significant issue in the near future.)

Americans respond politically to economic needs, and as the economy is considered to be in good shape since the last election, why rock the boat?

In any case, neither Gore nor Bush is perceived as representing radical change, so does it really matter who wins? American politics is basically a politics of interest, not ideology, and the fact is that the legislative branch has more power to deal with the present issues of concern, and since the end of the Cold War and with it the “imperial Presidency,” the legislative branch is reasserting its power. Moreover, it is important to remember that the President is not elected by a national vote, but by the majority of “electoral votes” assigned to each state. Hence, as has happened before, he could have less votes than his opponent and still win the election. That is, the candidate for President has to run in fifty elections, not only one, where the voters’ interests will vary from state to state depending on mostly local or regional situations.

A murky picture
There are indeed voters that will vote according to their view of the role of the state in social and cultural life, and these can be divided between “conservatives” (minimize state intervention) and “liberals” (give emphasis to government solutions to problems). For the most part, conservatives will vote Republican, and liberals will vote for the Democrats. The situation, however, is not that neat. After the turbulent period of the late 60’s and early 70’s, the Democratic Party turned sharply left, its political preferences more and more tied to a pacifist, leftist ideology (especially in cultural matters). The practical-oriented Democrats felt abandoned by their party, and under Ronald Reagan, the Republicans reached out to them successfully, leading to Reagan’s victories. After Reagan, the Republican Party began to move again to its more traditional roots as a pro-business party, counting on the votes of the “Reagan Democrats,” who had no other place to go. Anxious to rescue the Democratic Party from continuing defeats, a group of Democratic leaders established the “Democratic Leadership Council” (DLC) to take control of the Party away from the ideologues and bring back the Reagan Democrats. Bill Clinton and Al Gore, for example, are products of this successful effort. In so doing, however, the “new Democrats” were careful not to lose the votes of the most committed members of the old alliance coming from the cultural left. The Republican Party hoped to capitalize on this in order to appeal to voters who, though closer to the Democrats on economic issues, were fiercely opposed to the agenda of the cultural liberals, especially evangelical Protestants and conservative Catholics. In many places, these strongly committed voters became the grassroots of the Republican Party, forming an uneasy alliance with the economic conservatives. Ever since this development, whoever wanted to run for President as a Democrat or Republican had to secure very shaky coalitions: on the Democratic Party side the coalition between the cultural liberals and DLC-type Democrats, and between the cultural and social conservatives on the Republican side. In the middle are those “swing voters,” who will decide the outcome of the race and who are primarily concerned with concrete, practical issues. (The majority of Americans would rather exclude cultural issues from politics, preferring the American “live and let live” spirit, whatever they think of abortion, feminism, or gay rights.)

By the time of the national conventions, it appeared that Bush was able to secure his base, and so now could begin to reach out to the “swing voters.” The Republican Convention was a perfect example of this policy of “inclusion not exclusion” and of “compassionate conservatism.” It seemed as if the Republicans in this election want to be seen as the re-incarnation of the traditional Democratic Party. The question for Bush is, will the swing voters believe in this new face of the Republican Party?

Surprises at the Convention

On the Democratic side, it seems as if Gore’s supporters were not too sure that he had indeed secured the cultural liberal base of the party, so the convention surprised many of the DLC supporters by its apparent turn back to a more leftist look, both economically and culturally. Just last week, a leading commentator in The New Republic (firmly pro-Gore, who once wrote for the magazine) worried that Gore looked as if he wanted to undo the accomplishments of the DLC. The question for Gore, therefore, is whether the “swing voters” will understand his need to secure the Party’s base and pay more attention to his proposals on the concrete issues they care about.

At the present time, it seems that Gore is zeroing in on the “working American” image as the key to the swing voters, while Bush seems still to be insisting on the new look of the Republican Party. This makes Bush supporters worried, since the debates did show Gore’s powerful debate tactics and his passionate attention to facts and figures, which Bush simply cannot match. What will Bush offer in response? It seems that his chances depend on whether he is able to present himself as the candidate who will provide Americans with more opportunities to take control of their own lives with the government as facilitator, more than provider, except, of course, for those who need government help in order to survive with dignity. In the terminology of the Catholic social doctrine, Bush has to show that he is the candidate that can best combine subsidiarity with solidarity.

Amazingly, for all the attention they receive in the media, at the present time it appears that racial, ethnic, and multi-cultural politics will not play a major role in this election. The vast majority of African Americans and Hispanics are expected to vote Democratic at the national level because they simply do not trust the Republicans to care sufficiently about their economic needs and immigration concerns. Although many of these minorities do not share the cultural outlook of the liberal Democrats, they are in this country looking for economic success, not for cultural reinforcement. But since what matters is winning the electoral votes of the individual states rather than the national numbers, the votes of the racial, ethnic, and cultural minorities may be decisive in those areas where these issues have economic implications.

As to the issue of religion, which pops up in often embarrassing ways (for seriously religious people)–and with the nomination of the Orthodox Jew Joe Lieberman as Gore’s running mate this has certainly been the case, not to mention Bush’s statement that his favorite philosopher is Jesus Christ, and Gore’s frequent pageants to faith–it is not expected to play a significant part, since the swing voters consider it an intensely private matter.

The Catholic bishops issued a statement on the elections in which they listed seven “themes of Catholic social teaching” that should guide Catholics in their vote: Life and Dignity of the Human Person; Call to Family, Community, and Participation; Rights and Responsibilities; Options for the Poor and Vulnerable; Dignity of Work and the Rights of Workers; Solidarity; and Care for God’s Creation. The bishops’ statement is quite good, and absolutely no one in the country will be able to offer the vision that they put forth. But unfortunately, most Catholics will pay absolutely no attention to it. There is also the danger in the statement that the Catholic contribution is purely at the level of moral inspiration–which is how most Americans see religion anyway–and not of judgments about reality capable of generating a culture of life.

In this context, Communion and Liberation has disseminated a flyer on the “politics of responsibility” which makes it quite clear that the Catholic vision betokens a particular stand with respect to reality.

Following an insight of Fr. Giussani, the flyer recognizes that the United States is a privileged place for the understanding of this vision because of the “American dream” for liberty that has sustained its history. For all their exposure to immense power touching on every area of life, the American people still respond to ideals, and this is the basis for what could be the most important Catholic contribution to American politics: the conviction that ideals are possible and worth being pursued with unwavering hope. In Christians, this conviction does not arise from naïve dreaming, but from having encountered Christ as the Incarnation of the human Ideal that overcomes death itself, in perfect correspondence with the desires of the human heart. Thus, we affirm the reality and value of human creativity, and place politics at its service. For this to break through a politics of cynical manipulation of those desires, it is insufficient to provide inspirations and promote “values.” What is needed is witnessing.