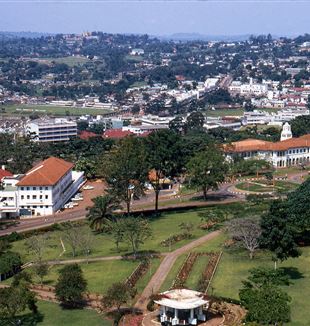 “Why so much emphasis? In the end, isn’t it just a book?” Many asked these questions as they arrived in the Victoria Hall of the Sheraton Hotel in Kampala for the presentation of Father Giussani’s The Religious Sense. Two hundred people participated in what, according to Father Tiboni, was the Movement’s most important public gesture in Uganda since August 1981 in Katigondo when CL was publicly presented in Uganda for the first time. The Ugandan community’s desire to make The Religious Sense known was joined with the dynamism of the local and universal Church in the paternity of the initiative assumed by the Apostolic Nuncio and the Cardinal Archbishop of Kampala. After the Kanungu tragedy, the largest mass suicide/murder of a religious sect, even the profound religious sense of Africans is showing the strain of mystification. The encounter on June 11th thus furnished an occasion for bringing into focus the true dimension of religiosity. The bishops were already gathered together in the capital for the meeting of the Episcopal Conference, which decided to include participation in the launching of the book in their program for the feast of Pentecost.

The Ambassador’s question
Before going to the Sheraton, we accompanied Michael Waldstein, one of the speakers, on a tour of the seven hills of Kampala. The town was teeming with people, who seemed to spring up from the side of the road, returning to their metal-roofed shacks where they live with their many children in the smoke of burning coals and by the light of oil lamps. Waldstein was moved by the sight of the slum, and together with Rose, from the Meeting Point [a suburban outreach program that assists–through psychological and medicinal support–the sick, widows, orphans, and other children in need], he looked at everything with great curiosity, struck by the elegance of the humble but brightly colored clothes worn by the Ugandan women. Then we went into the heart of the city, with its million inhabitants, glass skyscrapers, manicured lawns, and tall palms. The choice of a site for the presentation was a strategic one, not a selection made for luxury. AVSI provided a van which filled up with bishops, eleven of them coming from all over Uganda. There were laymen and religious in equal measure, with many orders represented, from the Combonians to the Little Sisters of Immaculate Mary, and members of the international diplomatic corps and of the intelligentsia from the University of Makerere. Everything was organized perfectly–the presentation of the exhibition on freedom, the book table, the choral singing. Waldstein immediately captured the audience with a presentation aimed at highlighting the pedagogical aspects of the PerCorso. The German Ambassador, as a jurist, asked a crucial question about freedom: “I can understand accepting in legal terms that I am free to do what does not infringe on the freedom of others, but what does it mean that I am free when I am able to do what is good? Who defines, prescribes, and imposes what is good? Does the book give an answer to my question?” No protocol can hold in the face of such an interest, but Waldstein touched delicately on the question of the relationship with the Protestant Evangelical Church, to which the Ambassador belongs. “Is it a fact that Jesus has left us a community in which his action continues? This is the crucial question which Luther answered in a critical way. If the answer is yes, then it is reasonable to view this community as a place where He can be met. Today there is the hope that our worlds may be alienated no longer and that you may experience the Catholic Church not as an authority that imposes, but as a place to meet Christ.” There was a pleased look on the Ambassador’s face, and he said he was satisfied with the answer. At the end of the presentation, he could not stop asking questions. The moderator, Michael Nganda, overcame his embarrassment at introducing the testimony of his wife Anne, an economist at the Public Health Institute. “We often think that the questions we ask about our life are useless ones. But I need to know why God joined me to my husband and what He wants from our marriage. The experience of the sign, explained in Chapter 11 of The Religious Sense, helped me understand this point. How can I know what I need, if I don’t know who I am? And I can know myself only in the companionship of those who live the experience of the humanity of Christ.”

A curious young man
The audience marveled at the words of the Italian Ambassador, Luigi Napolitano, who is very much aware of the works of the AVSI and the Ugandan CL community. His quotations from the book demonstrated his attentive reading of The Religious Sense and a great passion for the thought of St. Thomas Aquinas, “who identified truth, goodness, and beauty with the Being.” “Giussani won me over by making me feel like the curious young man that I once was, completely swept away by the lessons of my teachers. I believe that Giussani gives many people this same sensation, and I want to thank him profoundly for the gift he has given me.”

The Cardinal Archbishop Emmanuel Wamala synthesized in his talk the position of the Church in the face of the challenges of society: “Each person has been given the ability to seek his creator and will never be satisfied until he finds rest in Him. But deceit can lead vulnerable groups to witchcraft and the occult. The event of Jesus 2000 years ago is the culmination of all man’s searching.” The Apostolic Nuncio in Uganda, Most Reverend Christophe Pierre, gave the closing remarks. What emerged was the position of one who knows in depth the resources of his Church and trusts them, with a great openness toward the movements. Explaining the reasonableness of Giussani’s method, Father Tiboni emphasized that it is extraordinary to see someone who, while not participating in the life of the Movement, has an even more profound and clear perception and comprehension of the charism. “It seems to me that the speakers were people who have been struck and moved by contact with Giussani’s book. They have spoken of the book and spoken about themselves.”

On the terrace
The Nuncio pointed out how the charism of Communion and Liberation is for the whole Church, starting with himself; he has been so deeply struck by the dynamism involved in School of Community as to promote it for church and university groups. In the end, he was the one who helped many understand why there was so much emphasis surrounding a book. While the guests were drinking tea on the Sheraton terrace, Clara, an AVSI volunteer, commented, “The charism is strong by its very nature, and the greatest thing we can do is be a part of it; this becomes irresistible not only for us, but also for all the others. We have been moved and astounded at the respect these people have for Father Giussani.” For all the friends involved in the preparation of this event, it was a meaningful experience of working together and letting themselves be affected by an event “that went far beyond everybody’s organizational abilities; something unexpected happened which is bigger than we are,” Clara added.

The question asked by Giuliano, a doctor in the World Health Organization, while the guests were going out into the warm evening–“What do we do now?”–was reformulated by Father Tiboni. “Something has truly happened, because I see everyone has been moved and affected. This is a great responsibility, and I wonder how we can go forward with such a great abundance of grace.” “It is reality itself that gives us our directions,” Clara concluded. “The talks, especially those of the Cardinal and the Nuncio, have expressed a judgment on the Ugandan situation. The event has offered some great challenges, that we may be able to take up.”