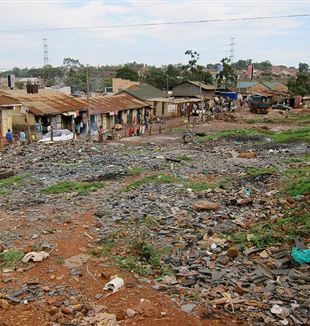 Last January 10th, for the first time, a session of the UN Security Council was dedicated to AIDS as a political not a health emergency, since, as Secretary Kofi Annan said, in 1999 its death toll was ten times that of armed conflict. Uganda is one of the countries most struck by this illness and its social effects. More than 10% of Ugandans are ill, two million people, and at least half a million have died since 1982, the year when the syndrome of severe weight loss, the slim disease, began to be diagnosed. The average life span has declined from 52 to 42 years. The hardest hit have been the ìproductiveî categories of people, so that by striking those between 20 and 40 years of age, AIDS has brought the country to its knees, creating hundreds of orphans every day whom not even the extended African family is able to absorb. In all of Africa, 10 million children have lost at least one parent because of AIDS, and 1,100,000 of these are in Uganda. Every year 45,000 Ugandan newborns contract the virus from their mothers.

However, there is some encouraging news. The contagion seems to be diminishing in the limited samples of population who are regularly tested: the disease decreased from 30% to 13% in pregnant women at the Nsambya Hospital in Kampala between 1991 and 1998, and from 32% to 10% in the population between the ages of 15 and 19 in the district of Kabarole, during those same years. What are the reasons for these results, which are unique in all of sub-Saharan Africa, where 13 of the 16 million AIDS victims in the world to date are buried? The international scientific community has turned Uganda into a laboratory for vaccines and therapies. While the results are awaited concerning toxicity of the vaccine created by the Italian researcher Barbara Ensoli, three other vaccines, one of which was developed in Uganda, are already in the experimental phase. The prospects are significant for reduction of the transmission of the virus from mother to fetus, thanks to an Italian-Ugandan project. Therapies against the retrovirus, which have brought important results in Western countries, are not widespread here because of their high costs and the need for constant monitoring. And the exultation of Elisabeth Madraa, Director of the AIDS Control Program, which claims to have sold 50 million condoms in 1999 (ten for each sexually active Ugandan), appears unfounded. A response surely is contained in the cultural position described by Ugandan President Yoweri Museveni at the World AIDS Conference in Florence in 1991: They tell us that a thin piece of rubber will protect us from death on our continent. In countries like ours, where a mother often has to walk 20 kilometers to buy an aspirin for her sick child, condoms will never be a solution. A return to our traditional culture, which emphasizes marital fidelity and condemns pre- and extra-conjugal sex, is the real answer to the AIDS threat. We must reaffirm publicly the respect and responsibility each of us has toward our neighbors.

Faithful to traditional values
The Ugandan government has made this manifesto the basis of its health policy. In an informational pamphlet in the form of cartoons distributed in 1990, the question "Can AIDS be prevented by using condoms?" was answered with an emphatic, "No." The publication aroused great irritation in UN circles. Uganda, which cannot do without the humanitarian aid of UN agencies like the World Health Organization and UNICEF, did not give in, however, to the dictate, and only partially modified the negative answer to this question.

Responding to Museveni's appeal, a solidarity campaign has developed which puts the non-governmental organizations, the churches, and the large humanitarian organizations in the front line. Rose Busingye is in charge of the Meeting Point in Kampala, a small non-governmental organization established in 1990 in Kitgum, in northern Uganda. A group of Italian AVSI volunteers helped their Ugandan friends to respond to the problem of AIDS that had struck their families and close friends, with the aim of not leaving them to face sickness and death alone. Rose explains, "Now AIDS is fashionable. Everyone creates projects to help victims, to defend human rights, to fight this illness. But the person is reduced to an illness. Someone comes here with AIDS, and the tendency is to treat his sickness. We look, instead, at the person who is sick." With a budget of $225,000 Rose helped about a thousand people in 1999. This is little money and a lot of charity. The Meeting Point is mobile. Those who can, get there on their own; otherwise, Meeting Point volunteers go to the most abandoned slums, the poverty-ridden, unhealthy neighborhoods where AIDS victims die every day. "Already five this week," says Rose nothing, as she has people call her to underline that everything she does is the work of an Other.

The Meeting Point's legs
Today we are with Noelina Namukisa and Christine, the Meeting Pointís legs, who go to see Imelda, John, and the other patients in a little jeep decorated with Matisse's image of Icarus. The Meeting Point operates in the suburbs of Kampala, at Kitgum and Hoima, in the western part of the country, visiting the sick, widows, children, and orphans, offering psychological support to the young people and their families, teaching the rules of health and sex education, keeping up with the patients in their homes, and providing care and medicines to those who cannot be hospitalized because of financial problems or because their illness is too far advanced. "The scientific world," Rose continues, "approaches the problem as though there were no hope of dignity for the human being. It replaces the person with what we must or can do for him or her. This is a manner that risks doing violence to the individual." In service at the Meeting Point are 5 full-time nurses, 18 helpers (some of them AIDS victims themselves), a few volunteer doctors, and Father Tiboni who, whenever he can, goes to visit also the sick in Kitgum. Then there are the people who have come into contact with Meeting Point, such as Loredana Napolitano, the wife of the Italian ambassador at Kampala, who since encountering the group has made it her weekly task, involving also the wives of the ambassadors of the United States, France, and India. In 1999, those benefiting from the Kampala Meeting Pointís activities included 950 AIDS victims, 700 orphans, 200 women, and 50 girls from the poor areas of Namuwongo, Nagurum, and Acholi Quarter.

Living charity
We enter Imeldaís room in the slum of Soweto, a ghetto where, before the Meeting Point came along, no one set foot. The house is nice. "Mami Rose and Mami Noelina gave me back my life," says Imelda, with her sunny face, and her two children who tested HIV-negative after her husband's death Imelda had been a little girl adopted through AVSI 'distant adoptions' program. "My parents abandoned me when they found out I was sick. In their company I feel like a new person." Often the sick who, thanks to the Meeting Point's help, see their health improve, become volunteers to offer to others the assistance they themselves have received. Activities are started in the slums to generate income and to give greater dignity to Ugandan women through work, to help them emerge from their marginal existence caused by sickness and poverty. These enterprises include cultivating potato and mushroom crops, raising poultry, rabbits, and pigs, selling coal and food, and producing mats, objects for the home, and typical local crafts. There are also literacy courses for adults and an elementary school for the children and girls who are forced to leave the public schools. Those who become involved with Rose and Noelina and their group live much longer than the life expectancy given them by their illness. We continue our visit, stopping by John's house; he is so sick that he has trouble dragging himself out of his room to sit on a chair. We are on the outskirts of Soweto, where shady banana trees watch over his wife's grave. Meeting Point pays his rent and buys him oil for his lamp and food. "I owe them my life, this life that is worth living even if all I can do is accept charity." At the Meeting Point's headquarters, songs and dances have been organized for us in front of the orphanage. They express a contagious will to live. The dances are traditional ones of all the Ugandan tribes, Baganda, Bunyoro, Acholi. Theater and dance are used as instruments for recreation and socialization; they help build awareness of the problem and also generate income because the group is being invited more and more often to participate in public events. A teenager declaims his drama with great feeling: "Doctors, politicians, lawyers: there is so much suffering. Take this illness away." It is reality that is on stage, true stories that ask for a miracle as their grand finale.