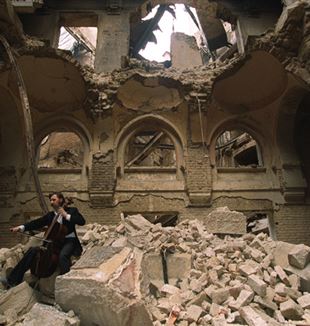 "The thought is intolerable of an America so powerful as to be considered responsible for the great historical events in every part of the globe, beyond its capabilities of knowledge and planning. For a powerful nation, nothing is more dangerous than the temptation to hide the limits of its power. It would be our ruin if we considered ourselves the lords of contemporary history." Reinhold Niebuhr's words on the "limits of American power," written almost half a century ago by the leading Protestant theologian in America, resound just as dramatically current in these days at the end of the millennium which coincide with an unprecedented NATO military initiative in the Balkans under American leadership. In Korea (when Niebuhr was writing), in the Persian Gulf and in Somalia the United States intervened with a UN mandate, in Vietnam and Bosnia at the request of the local governments, no matter how fragile: at times they have violated the sovereignty of certain countries (Libya, Grenada, Panama, Iraq, Afghanistan, Sudan), but always for limited goals or precise reprisals. The air campaign against the Federal Republic of Yugoslavia in which the United States has involved NATO represents a completely unprecedented event for a series of reasons: it constitutes interference, without UN authorization, in the internal affairs of a nation; it makes NATO, which is a regional military defense alliance, an instrument for peace enforcement in a geographical area that does not pertain to it; it represents objectively an act of support of a separatist guerrilla offensive. Never has the United States gone so far; never has it acted with so little formal authorization; never has it distorted the nature of NATO in such a blatant manner; never has it given such open and massive support to armed secession.

A consensus that is hardly unanimous
The European reactions to the NATO intervention in Serbia and Kosovo are well known: A part of the political class and public opinion have embraced the political and humanitarian justification of the operation, which is to "impede" the genocide, or ethnic cleansing, in act of Kosovar Albanians and to pacify the Balkans by defeating the dictator Milosevic. Another part, extremely varied from political, cultural, and religious points of view, has denounced a military intervention that is having the opposite effects of its declared aim (hundreds of thousands of Kosovars are being expelled and almost certainly massacred and the Balkans are on the verge of a general explosion), and accuses the United States of pursuing instead some secret goal, that of weakening and dividing Europe in order to reaffirm its own hegemony over the world.

What many Europeans don't know (and the few who do know are not doing anything to point it out) is that the NATO intervention in Kosovo is far from enjoying unanimous consensus in the United States, where the apparent rock-solid unity of public opinion and the political world surrounding the decisions of President Clinton is only a result of a political reflex, similar to the one that led the Serbs to rally around Milosevic despite the contempt that many of them feel for him. Raising doubts and criticisms are not only far right Republican isolationists like Pat Buchanan or far left intellectuals like Noam Chomsky; from the Senate to the New York Times and the Washington Post, from Henry Kissinger to Edward Luttwak, the heart itself of the American establishment in its most irreproachable components is expressing irritation at the way in which the war was decided and serious worry about the unfathomable prospects that are opening up. It should be recalled that Congress's full support of Clinton's policy came only after the bombing started; in fact, the Senate voted on the evening of March 23rd in favor of the planned air offensive with only 58 votes in favor and 41 against. Once the initiative began, the House voted the next day almost unanimously (424-1).

Opposite results
The objections do not arise only from the obvious observation that the military action has up to now produced opposite results from what was declared. Strategists and diplomats, who have never believed in the pre-eminence of humanitarian and idealistic motives for the war, are critical and concerned for eminently political and strategic reasons. The most complete summary of these arguments was made by Henry Kissinger for Newsweek: "The administration, using symbols which have a strong appeal to public opinion, proposed three kinds of argument. The most convincing is that the agony of Kosovo is so intolerable to our moral sensibility that, in order to bring it to an end, we have to use force, even in the absence of traditional considerations of national interest. But since this leaves unanswered the question of why we are not intervening in eastern Africa, in Sri Lanka, Kurdistan, Kashmir and Afghanistan-to cite only a few of the places where the number of victims is infinitely superior to that in Kosovo-the President evoked historical analogies or current threats which leave one extremely perplexed; Slobodan Milosevic is not Hitler, but a Serb criminal. Neither Milosevic nor any other Balkan leader is in a position to threaten the international balance, as the President continues to maintain. I understand the humanitarian reasons for the intervention, but this does not exempt democracies from the obligation to propose an acceptable solution. The Rambouillet accords do not satisfy this need. Conducting negotiations on the basis of agreements drawn up exclusively in foreign chancelleries and trying to impose them by the threat of bombs have only exacerbated the crisis in Kosovo…. Since the war goes on, the administration must redefine its goals. NATO cannot survive if it abandons the campaign now without achieving its aim."

A war which started as a "test"
Among the many reasons for perplexity, what upsets Kissinger and, for example, the analysts from the highly authoritative Center for International and Strategic Studies in Washington, is precisely this risk that NATO will fall apart. The strategic paradox of the military intervention in Serbia and Kosovo lies right here: a war born, according to Ambassador Sergio Romano, as a "test" of "the validity of the American plan to transform a defense alliance into an organization for collective security" and as an instrument to allow the United States to "preserve NATO because it guarantees them a presence in Europe and guarantees that Europe will never have its own military policy," is placing in danger the very existence of NATO and American leadership in Europe. For this reason President Clinton and Secretary of State Albright are forced to undergo increasingly fierce criticism: their "miscalculation" (believing that Milosevic would give in after the first bombing raids, believing that wars can be won without the loss of even one man in ground operations), risks damaging the United States more than can be imagined.

Naturally the question arises as to how this was possible. Up to now the most accurate answer has been given by an Italian observer, La Stampa's editorialist Pierluigi Battista: "There is a reason deriving from the cultural anthropology of the current world leaders-from Bill Clinton to Tony Blair to the Socialist leaders, all of whom came of age in the cultural turmoil of 1968-according to which political behavior must be inspired by motives of goodness, moving always in defense of rights that have been oppressed. Convinced that they are doing good, they are in a Weberian sense far removed from an ethic of responsibility, and they do not see the devastating effects of their decision: 60,000 refugees before the bombing, a million afterwards. Idealism… is not resigned to the end of ideologies, and wants to replace them with a universalization of ethics, with absolute values. The ethics of absolute principles marks the end of any form of realism, it excludes every rational calculation between cost and benefit. It is not that politics must be separated from morality, but making ethics and politics coincide is dangerous, because it can produce a virus that infects the whole world, fomenting the mad idea of freeing the world from evil. This is not only culturally unacceptable, but politically destabilizing. The first micro-ethnic group that felt itself to be oppressed could appeal to NATO and drag it into an unending conflict."

The looming danger is precisely this one defined by Battista: it is not so much a conspiracy, which has to be proved, of America against Europe, as a fatal mixture of imperial presumptuousness (as denounced as early as 1952 by Niebuhr) and '68 realpolitik, which replaces the real with the virtual. This cultural mixture, eminently anti-realistic and thus irrational, is not capable of looking at reality as a whole, but renders one aspect absolute and undertakes its initiatives on the basis of its relative prejudice. The consequences risk being catastrophic, for America and for Europe.