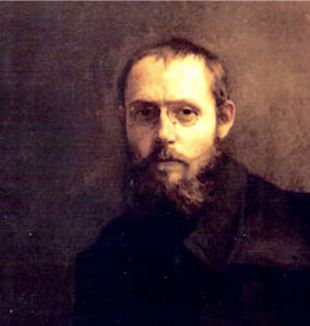 Celebrating the anniversary (in this case 150 years) of a great man (Charles Péguy, born January 7, 1873) is something that runs the risk of becoming a habit. That would be a big mistake, however, as he himself warned: "There is something worse than having a perverse soul, and that is to have a habituated soul." Péguy pointed to an alternative to this arid habit"; he called it "sovereignty of the event." Beware, for the same word "event" can be repeated with a "habituated" mind and heart; without, that is, being "moved" by it.

Péguy's biography tells us just the opposite: he was always displaced or, rather, "went out of his way" as, with abysmal insight, he himself said of the Eternal Father: "A God, my friend, went out of his way [...] for me."

Charles Péguy, born in a working-class suburb of Orléans, lost his father when he was just a few months old. This event, which bears the face of absence, hollowed out a profound sense of fatherhood in him (he had four children): "It is such a tremendous responsibility (and for ourselves and for everyone) to have brought children into the world. When you see a little bit what life is all about."

As a child, he watched his mother work at home with alacrity and precision, and he worked as a magazine factotum with the same care with which she stuffed chairs and the people of the Middle Ages "had cut the stone of their cathedrals": "I proofread with such meticulous care that I almost seem ridiculous, especially when so much care is not enough to avoid a few typos."

With the help of an intelligent elementary school principal, he was able to go to high school (which he could not have afforded) and became enthusiastic about literature, theater and art, maintaining his predilection for reading the text and looking at the work as it is (reading and looking are an event) rather than relying on commentaries. Have a look around an exhibition and see if this was not a revolutionary choice. The privilege given to commentaries is a characteristic of the "modern world," one of Péguy's great polemical targets: "All texts disappear buried under all commentaries, all living texts are lying dead under the mute dust and under the ashes of the chatter of glosses."

Little Péguy went to catechism in his parish, but as a teenager he abandoned the faith, which he perceived a useless habit. Another sun was rising on his horizon: living and fighting to create the "harmonious city," as Joan of Arc had done in her Orléans. He dedicated his university years to the battle in defense of the innocent Dreyfus, his adherence to socialism, the founding of the "real newspaper" – Cahiers de la Quinzaine – to which he would devote his whole life, with marriage as the first seed of the harmonious city.

Obstacles and failures also occurred: the socialists treated him as an enemy because of his freedom of thought, the magazine struggled to survive, his relationship with his wife cooled and he fell in love with another woman, many friends abandoned him, his third son was often seriously ill.

In the background, silently, another event comes to the surface: the God he had abandoned becomes interesting again because Péguy discovered that this God, by going out of his way, "sacrificed himself" for him, that is, shared his entire humanity: "The very technique of Christianity lies in a singular; mutual; unique; reciprocal; impossible to undo; impossible to dismantle; of the temporal in the eternal, and (but above all, which is the most often denied) (which is in fact the most wonderful) of the eternal in the temporal." So much so that "even God was afraid of death" (this is a line from Corneille that Péguy wrote about in Véronique, meditating on Jesus in the Garden of Olives).

The first thing the 33 year-old Péguy did after rediscovering his faith was not a break with the ideals that had moved him until then, but a deepening of them: "We shall never deny an atom of our past." He took up the colossal play he had published when he was 24 years old again, Joan of Arc, and began to "nourish" it with the novelties that life events had brought him in the meantime. This was published in 1910 as The Mystery of the Charity of Joan of Arc, where we find the Catholic faith in Christ admirably described: "He is here. He is here, as on the first day." The pages on the Passion of Jesus, then, became so dear to Fr. Giussani that they became the established content of the Way of the Cross he conceived and proposed.

Péguy would have liked to rewrite his early work in its entirety, but the sovereign events of his life drew his attention to other fronts, to other battles. First and foremost, it was a matter of awakening consciences to the deception of the "modern world" that replaced reality as it is – "earthy experience, still full of the slag and sludge of its gangs" – with ideas, analyses, systems, statistics, calculations; ultimately money. L’Argent [The Money] (1913) would become Péguy's sharpest warning against a culture that makes universal quantification its standpoint on everything; for example, at work, where the painstaking calculation of "who must do what" asphyxiates all creativity. That is what the modern world has achieved: before, "in most workplaces there was singing. Today there is grumbling."

It was also a matter of reminding Christians what their task in the "modern world was." The first thing was to realize a dramatic fact: "We have seen a new society formed, if not a city, after Jesus, without Jesus." Faced with this fact, many Christians "grumble, moan, whine," complain about the "wickedness of the times"; but Péguy retorts violently, "The times were sicked even under the Romans. But Jesus did not take refuge behind the wickedness of the times at all. He did not incriminate the world. He saved the world." The people born of Him walk through history with the strength of this certainty: "The sinner stretches out his hand to the saint, shakes hands with the saint, for the saint gives his hand to the sinner. And all together, one through the other, one pulling the other, they ascend to Jesus, they form a chain that ascends to Jesus, a chain of inextricable fingers."

Read also - What moves God is to see hope in men

Death surprised Péguy at the age of 41, on the first day of the Battle of the Marne. The Christian event had enabled him to stand upright in the face of difficulties: he held on to the magazine, remained faithful to his wife, entrusted his sick son to the Virgin of Chartres with a memorable pilgrimage, and, before leaving for the front, tried to reconcile with all his enemies.

We cannot forget that Péguy lived his solid faith by remaining in the "portico" of the Church because, married only civilly and refusing to force his wife to convert, he could not access the sacraments. Where did his courageous freedom come from? From the fact that, on that portico, Péguy found himself in the company of the "little hope," that "little nothing child" who "advances along the carnal path, on the bumpy road to salvation between the two big sisters," faith and charity. It is the little one that drags the big ones along because "what defeats habit is not some effort of an intellectual nature: it is the little Hope." Reading The Portico of the Mystery of the Second Virtue could be a good gift for Péguy’s 150th birthday.