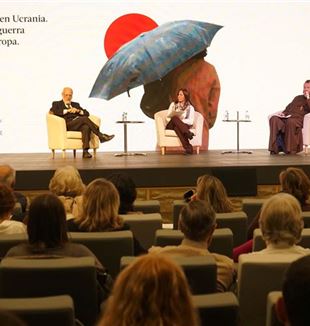 For three intense days, participants in EncuentroMadrid 2022 sought to verify the challenge posed by the title of this edition: with the pain caused by the pandemic, with the uncertainty caused by the energy and economic crisis, with the injustice of a cruel war on the borders of Europe, is it possible not to flee from circumstances and enter passionately into the flesh of the reality that we are living?

In the face of an image of religiosity as an escape from reality, projected by some ideologies, Fr. Luigi Giussani, whose figure we remembered during this EncuentroMadrid, said that "the only condition for being truly religious is to live the real intensely." When we delve deeply into the density of work, the drama of refugees, the fear caused by illness or the nonsense of war, the question necessarily arises about the meaning of it all. Indeed, as we have seen in so many testimonies, "living the real implies the possibility of finding what its meaning is."

In this edition we have addressed the demand for truth and justice that the invasion of Ukraine has raised. The peace we desire and ask for, following Pope Francis' tenacious call, can only be established on this basis. We are particularly provoked by the demand that the Ukrainian people’s struggle represents for Europe: to recover its most authentic identity, which consists in questioning all its historical achievements in light of the infinite value of the person. Indeed, it is the person, with their evident fragility and mysterious dignity, who is the fixed point from which we can always start again.

Such people include Magellan, Elcano and the sailors who made the first round-the-world voyage in search of the ideal, of a full satisfaction that money, fame and worldly glory cannot offer. The exhibition dedicated to this true historical epic was visited by hundreds of people, fascinated by the background of this beautiful and dramatic story. The person is also the fixed point that can resist totalitarianism, that can repair the damage caused by injustice, and that can offer the mystery of forgiveness, as documented in the play The Gaze of the Other.

But the person only grows and sustains themselves within a companionship that awakens their questions, fuels their desires and shows them the way in the midst of storms. This has been evident in events dedicated to the challenge of education, families for hospitality, work or responding to the refugee crisis in different parts of the world.

In the event dedicated to the figure of Luigi Giussani, Davide Prosperi, the president of the Fraternity of Communion and Liberation, emphasized the CL founder's passion for all aspects of reality, his constant provocation to live the desires of the human heart. Echoing the movement's recent meeting with Pope Francis, he stressed that Giussani is already the heritage of the whole Church and society. Certainly, EncuentroMadrid would not exist without the life he communicated to us and allowed us, for another year, to be in the midst of our society, to welcome its questions and freely offer the witness of a humanity shaped by the experience of faith.

Watch the videos of the meetings on the EncuentroMadrid Youtube channel