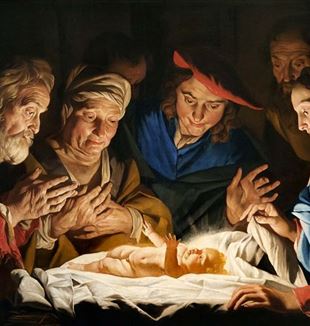 The shepherds–they were the first ones. They were the first to witness what happened that night in one of the caves outside of Bethlehem. The shepherds were very familiar with the caves because they often used them as stables. They did not hesitate to believe the angel that appeared to them. In fact, Luke’s account states that “they went with haste.” The shepherds rushed to the cave and found what the angel had announced. They could not have known; they could not have understood. Giussani described John and Andrew in the same way. Yet there was no need to explain what they saw. “There they found something akin to a paradise.”

How many times have artists tried to capture that instant of immediate adhesion to reality that was manifested to the shepherds in such an insignificant but at the same time exceptional way. Doing so is challenging–it is easier to tell the story of the visit of the Magi to the Christ child. Their story has more appeal, thanks to the solemn procession, their fine clothes, and the gifts that were so thoughtfully chosen and presented. This was not the case for the shepherds. The only ingredients that could be used to create an image of the encounter between the shepherds and the Christ child were simplicity and wonder. The shepherds exemplify the victory of simplicity.

It is no coincidence that in the fifteenth and sixteenth centuries, a period when great intellectual truths were explored, artists tended to reduce this astonishing reversal of the social classes to just a nice fairy tale. However, during the seventeenth century, a century full of turmoil, artists instinctively identified with the event related in the Gospel of Luke. Caravaggio’s masterpiece painted in 1609 for the Church of Santa Maria della Concezione in Messina was a turning point (it is now kept in the Interdisciplinary Regional Museum of Messina). It is a poor nativity scene; it is a nativity on the bare earth, devoid of any ornamentation. In the forefront is the excitement of the shepherds, who can barely contain their amazement and affection as they stand over Mary and the Holy Infant. It is also in the seventeenth century that another fascinating artist, whose identity is a mystery, was active. He became known as the master of the Annunciation to the Shepherds because he specialized in depicting this subject.

Mathis Stomer was a Dutch artist who worked in Rome, Naples, and Sicily as early as 1630. Stomer was a Caravaggista–a devout follower of Caravaggio–who remained faithful to the commandments of the revolutionary artist even when other artistic movements were moving in other directions. As Roberto Longhi noted, Stomer ardently adhered to Caravaggio’s language even when “Baroque was fading out and Rome, reveling in the victory of the Counter Reformation, paid no more attention to it.”

Instead of trying to incorporate the mainstream spirit, Stomer’s style became more radicalized. He made it simpler and more objective, to the point of creating an almost hyperrealistic version of Caravaggio’s style. As a result, he was forced to move away from Rome, which was at the center of the art world, to work in Sicily and later also in Lombardy. The Adoration of the Shepherds is the subject Stomer worked on with the most conviction, so much so that he went on to paint eight different versions, counting only the ones we know about. In the one selected for the Christmas poster, which is currently housed at the Museo del Palazzo Madama in Turin, Stomer seems to have created a snapshot of reality. The precise details of the faces and the hands stand out immediately to our eyes. The figures speak with their gazes, which would never look away from what is in front of their eyes. They speak with their hands folded in great devotion, held in amazement at what they had found. The light radiating from the infant Jesus illuminates the shepherds, whose presence goes beyond subjective reasoning. The shepherds are not just gazing at that “piece of paradise.” The event they are witnessing becomes part of their being. They are made of what they see.