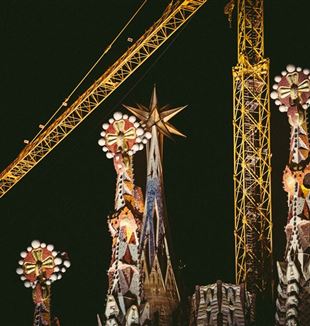 "The work on the Sagrada Família progresses slowly because the master of this work is in no hurry," Antoni Gaudí told his disciples on the construction site of his masterpiece in Barcelona. He knew that he would never see it finished; he understood that his task would be to begin its construction, to communicate its spirit to those who worked with him and to consign it to history and to the Christian people. He considered this an asset, rather than a limitation, because the Christian architect placed his hope in the One who builds people, and was therefore not afraid of history. He entrusted the extraordinary work to those who would come, in the hope and certainty that it would pass, for centuries, from hand to hand, building it up to its completion. Cathedrals live and exist thanks to this faith, to this dependence, and Gaudí himself was involved in the life of those who wanted the Sagrada, the Association of Devotees of Saint Joseph. They were not nobles, nor patrons, but a group of friends who gathered around Josep Maria Bocabella, a bookseller, showing that even simple men can contribute great things to the world. Since 1883, Gaudí and the Sagrada have built each other up. In fact, Gaudí was buried in the crypt of the church, resting on the foundations of the cathedral that he served, and which is still under construction, never ceasing.

December 8, 2021, the feast of the Immaculate Conception, will be an important day for the Sagrada Família: 139 years after the laying of the foundation stone, the 138-meter-high Tower of the Virgin Mary will be inaugurated, and a twelve-pointed star will be lit at its top, which will shine every night from then on, illuminating Barcelona.
We are used to looking at the Sagrada as a hymn to Saint Joseph, guardian of the Holy Family; he, a father and man, silently and surely obeyed and sacrificed everything to embrace a God made of flesh and blood who smiled and breathed, who was a child who grew and was taught to work, along with his immaculate bride. But what about Mary? What is her place in the Sagrada Família? The new star responds to this and from December 8, the Sagrada Família will be guarded by twin stars. 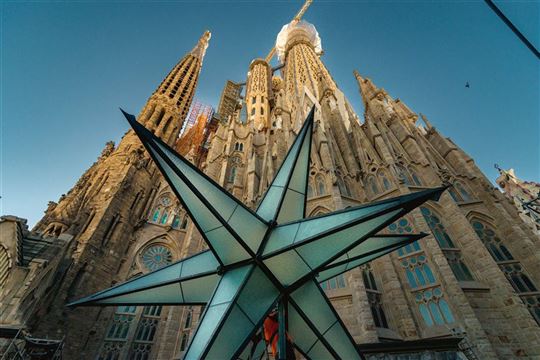 The first is the comet star, carved in stone on the facade of the Nativity, the only part of the church the architect saw completed. He wished it to be completed first, in every detail and sculpture, subverting the rules of construction. He believed that "its importance would make it impossible to abandon the building of the church" and that, to sustain the daily construction, one needed to raise their head and see concretely what one was working for. This need still applies, a century later. It is a star that does not rest; its tail does not push it to the ground, but looks towards the sky. The whole facade rises like an explosion from its center, the Nativity by sculptor Llorenc Matamala, a friend of Gaudí. This is a scene of great tenderness, in which the Virgin Mary is intent on placing Jesus in the manger, the child smiling at those who arrive and St. Joseph watching over them from above, and the curious heads of the donkey and the ox peep out. Going up, we meet all those who have flocked to that Child: the angels, the shepherds, the Magi and the star. Its tail illuminates the Nativity and its core supports the Annunciation in the upper register: in that instant, in Mary's womb, that Child, which all of heaven wants to rush and see, including the star, became flesh.

The second star is that which the cranes have been laying at the top of the Tower of Mary in recent days. It is a star made to give light: it has 12 points, a steel frame and a glass body, it is 7.5 meters wide and weighs 5 tons. It will burn like a flame and will be illuminated every night, together with the 800 windows of the tower. "Morning star," as Gaudi wanted.
To understand its meaning, we must enter the church. Passing through the door of the Nativity, the apse opens on the right. This part of the church is to be dedicated to Mary, starting from the foundations. Beneath the altar is the crypt, whose keystone depicts the Annunciation, decorated in gold, from which 12 ribs depart, symbolizing the apostles and the tribes of Israel. We are part of the lineage of that yes. In the presbytery is the altar, made of rough granite, upon which hangs the crucified Jesus, made of wood, with his arms wide open to Heaven, to embrace everyone. Above his head, the unpredictable rises: the tower dedicated to Our Lady, Mare de Déu, which transforms the apse of the Sagrada into a gigantic, architectural Pietà, in which the Mother looks at the sacrifice of her Son, illuminates it and is generated by it.

In Gaudí's architecture, geometry, decoration and light are unified. The hyperboloid, the architect’s favourite geometric shape, is the heart of the tower, making it majestic, pierced by the light of the sun. The sun’s light, passing through Mary, is drawn down towards the altar to illuminate the crucifixion, passing through a golden dome that covers the ceiling of the apse. Just like a womb, as if Jesus were still in Mary's belly, the entire apse is a poignant embrace of the mother protecting her Son with her mantle and looking at him hanging on the Cross. And vice versa, that altar and crucifix push our gaze upwards, towards the hole of the dome and to the top of the tower, to the sky: she will be Assumed in Heaven.

Every single detail of the tower speaks of Mary’s story and invocations to Our Lady are carved at the base. The entire outer surface is decorated by trencadís, ceramic fragments characteristic of Gaudí, in white and blue tones, which are the colors of the Virgin’s clothes. The final section is composed of three parts. First, a six-metre high stone crown that terminates in 12 twelve-pointed iron, which is an attribute of the Virgin from Apocalypse, but also a symbol of the twelve apostles. She is the Mother of the Church. The lantern, an 18 meters high shaft, is a hyperboloid that ends in three arms that support the star at the top.
This tower does not stand alone but forms part of the 18 towers that raise the Sagrada. The others represent the 12 apostles, the four evangelists, and the main tower represents Christ himself. Together they represent the whole mystery of the Church from which Christ is born, guarded by Mary. Gaudí wished for this luminous star to guide the gaze of Barcelona and to flank the great tower of Jesus, yet to be built: Mother and Son, next to each other, in a relationship. As Majakovsky wrote in 1913, on the other side of Europe, while Gaudí was working on the Sagrada in Spain: "If they light the stars / does it mean that someone needs them?" Yes. I do. Right now. I need to see that I walk in the wake of not just any star. How beautiful it is to see a star that is lit, which not only illuminates the darkness, but embraces it; it makes the darkness shine in a relationship that has a precise face and promise, which is carnal and new, in which death does not have the last word, as its does in the hushed dialogue between those two towers.

Read also - The struggle for happiness

It is now Advent. Waiting and struggling. We thought we had escaped many things, even the pandemic, nothingness, but no. The fact that a star is being lit right now in Barcelona, culminating the construction of the tower of Mary, that this mass is being raised and that that star is being lit that will watch over men building the tower of Christ, is a sign for everyone, for me, this maternal gaze. It is a sign for me, who chooses to do my job every day, to say yes to the present, and who tries to be aware of what happens together with the friends with whom I want to walk, and who looks every day at the faces of witnesses of hope. In a world where so much is happening, a fact happens that asks me to choose to raise my head and point my finger, like a child, and see that everything is for me: a more than a century old construction site that has not been abandoned, but where on December 8 a star will be lit forever.