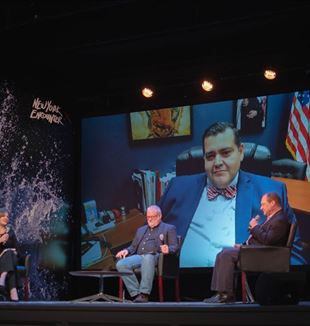 “I raise my eyes to the mountains, from whence comes my help?” The annual New York Encounter opened on February 12 to the intoned chant of Psalm 121. As Master of Ceremonies John Touhey wondered in his opening remarks, in a year in which we have suffered the sickness and death caused by the virus, the economic fallout of the pandemic, and the confusion and violence of the summer’s racial justice protests and January’s rush on the Capitol, “which one of us did not ask this question?”

The pandemic restrictions made for dramatic changes in the format of the three-day cultural festival in New York City. The event that has become an annual “reunion” for so many in the heart of Manhattan had to go digital this year, with most panelists joining via Zoom and participants watching on YouTube.

In front of this reality which has “hit us hard,” as event organizer Angelo Sala put it, the Encounter sought to stay in front of the circumstances that we are collectively facing with the awareness that the Psalmist’s cry immediately gives way to confident expectancy: “My help comes from the Lord, the maker of heaven and earth.” As Timothy Cardinal Dolan, Archbishop of New York, stressed in his Sunday morning address: “What is most real in our lives cannot be put under a microscope.”

In this moment, the witness of Luigi Giussani, the subject of one of the Encounter’s two virtual videos, offers extraordinary guidance. In the Saturday afternoon presentation of the video, panelist Barry Stohlman, a husband, father, and business owner shared how his encounter with Giussani changed him, revealing the emptiness of the narrative of the “self-made man.” What is needed, he learned from Giussani, is “openness to all of reality and absolute trust in the human heart.” For Giussani, a man’s “yes” to what is given in reality will lead him to his “yes” or “no” in front of Christ--the most important question he will ever encounter.

Another sure guide, Monsignor Lorenzo Albacete--“one of the two pillars of the [Communion and Liberation] charism in America,” as described by Sala--was the subject of the Encounter’s other exhibit. The continuing impact of the scientist, priest, theologian, and national leader for the Fraternity of Communion and Liberation who died in 2014, was also highlighted in a presentation by the editors of a new collection of his writings, The Relevance of the Stars.

The video exhibit, The Albacete Show, a hilarious and yet searching exposé of his life through personal interviews, letters, and archival footage, revealed a man whose freedom before “the Mystery” played out in rich and diverse relationships. As Sean Cardinal O’Malley, Archbishop of Boston, noted in one of the many intimate Zoom meetings between Albacete’s friends that followed the book presentation, “Lorenzo has helped so many people discover the beauty of the stars in the darkest of nights.”

Seeking such beauty, yet unafraid of the dark, the organizers of the Encounter took some risks this year. This was perhaps most evident in the Sunday afternoon discussion, “A Desperate Cry for Justice,” in which panelists shared painful stories of overt racism.

“It was one of the most challenging events we have had at the Encounter,” said Sala. “We could have started the event from many different points of view. We insisted that [the panelists] begin with their personal experience of racism. . . . This is an example of our method.”

Organizer Maria Teresa Landi agreed: “It was a cry for justice, as we titled the conversation. We wanted to see with their eyes their suffering. We wanted to be with them, because only if we are with them we can look for an answer to that cry.”

Remaining with others in their woundedness was also thematic in “Why on Earth?”, a discussion on the epidemic of suicide and mental health issues, particularly among young people. The willingness of panelists to reveal their own struggles with mental illness and personal connections to victims of suicide led to a genuine starting point in facing these issues that avoids : we were urged to avoid quick fixes and to begin to see those around us as the complex human beings they are, accompanying them in openness.

“Have respect for someone in great suffering that you can’t explain or analyze,” suggested Mary Townsend, Assistant Professor of Philosophy at St. John’s University. “Know that they have seen something of the vastness of the world that is terrifying, and so [try] to have respect for that feeling and sit with it.”

If mental health was in jeopardy this year, so were livelihoods. In “Not by Profit Alone,” moderator Anujeet Sareen noted that shocks to the economy “tend to put a spotlight on vulnerabilities that already existed.” Without offering any clear-cut solutions, the panelists suggested that any authentic response to the economic crisis must play out--at least in part--at the local level. This same idea of beginning “where we live” was reflected in the Encounter itself. The organizers encouraged participants around the country to experience the essence of the Encounter in their living room or parish hall through local “watch parties” and by sharing virtual events with friends throughout the country. Several communities hosted lively Zoom “happy hours,” allowing for informal discussions that ordinarily would have taken place in the lobby of the Metropolitan Pavilion, the Encounter’s regular home. Exhibit curators coordinated virtual “tours” of the two videos presented. And there was even a final “after party” in which friends from around the country took turns sharing songs in a moment of togetherness.

As Fr. Julián Carrón said in his concluding remarks to the Encounter, this year we have experienced many urgent “questions that constantly arose in us,” inviting us to discover a “depth of our ‘I’ which could not be satisfied simply by what we already knew.” In probing these questions without flinching before our deep human wounds, the Encounter pushed into that depth, uncovering a “hope that always surprises us.”