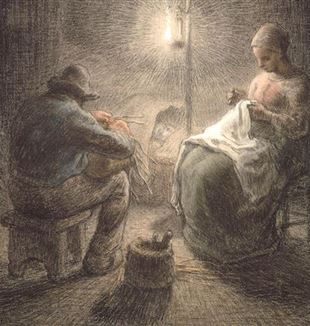 Barbizon is a small town about 40 miles south of Paris, but in the mid-1800s, traveling that distance was like leaving one world and entering another. Even more so for an artist, for whom the city offered the chance to encounter all the fascinating and tumultuous innovations that led up to the Impressionist revolution in 1874.
For Jean-François Millet, that distance was not a problem. In fact, he considered it a protective barrier that allowed him to concentrate on and immerse himself in what he cared about most. Beginning in 1849, he chose to live in Barbizon with his wife, with whom he had nine children. He stayed there the rest of his life. He was not the only artist to make such a choice, but whereas others made it based above all on an interest in “uncontaminated nature,” Millet was most concerned with the human factor. “They [Parisian art critics] wanted to force me to enter their world of parlor art, to break my spirit. No, no! I was born a farmer and I will die a farmer. I say what I feel. I paint things as I see them,” he said by way of explaining his choice. And further, he said, “The human dimension is what most grabs me in art.”

The work chosen for this year’s Christmas poster is emblematic of this approach. It is a pastel created in 1867 entitled Winter Evening. Millet is not simply an observer of a reality he admires–he is not interested in documenting that agricultural world, but rather in capturing its deepest spirit and making that the very substance of his paintings. He is both a realist and a devout man, devoted to the humanity of the farmers who remain faithful to the land and to their own history. He is attentive to every gesture; for example, that of the father absorbed in weaving a basket, but does not pursue minute details out of a need to document the social conditions of his subjects. His gaze, in fact, does not fix on poverty as what defines the status of this family, but rather an awareness of a destiny. The work is overflowing with that awareness, which is exuded in the essentiality of its composition, so simple yet at the same time elevated and perfectly balanced.

Millet’s is an art of proximity: he enters the intimacy of the peasant home, establishing familiarity and examining it in its bare simplicity. It is a real scene, but one that takes on a metaphorical weight. It is not the Holy Family, but is pervaded by that clear link between the everyday and the eternal that the family of Nazareth experienced and brought into the world. The light from the oil lamp, a radiating point placed at the center of the composition, directly above the baby’s cradle, echoes the iconography of nativity scenes. It is a nativity relived in a peasant home deep in France in 1867.

Millet’s world was an ancient one that still fascinated modern men and women. This pastel was, in fact, purchased by an American collector, Quincy Adams Shaw, a billionaire who owned copper mines in Michigan. Adams Shaw gave it to the museum of the city where he lived, Boston, together with 53 other paintings by Millet that he purchased when the artist was still alive. Another modern won over by Millet’s style was, naturally, Van Gogh. He discovered the French artist in 1875 at a Paris auction of many of his works that had belonged to a patron and collector who ended in ruin. “Millet is Millet, a father,” he would write years later to his brother Theo. “With him, you learn to see better and find ‘a faith.’” Van Gogh was entrusted with the risky task of catapulting Millet’s love for truth into the unsettled horizon of modernity. He did so with a mastery we all know, which came in part because of his experience of being a son.