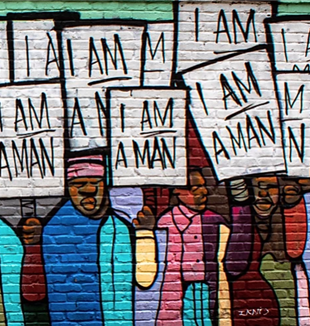 What does it look like to be loved entirely? To give yourself, to be received, to be embraced, with all of your wounds and all of your beauty?

The desire for a love like this permeates the life and work of James Baldwin.

For a black man born in Harlem during the Great Depression, the grandson of a slave, the stepson of a man who was part of the first generation of free men, these questions bear a unique weight and, for Baldwin, carry the urgency belonging to a prophet.

When you are met each day with the anger and bitterness of a father who, as Baldwin put it, was very black and beautiful, but who did not know that he was beautiful, and with a society that has conspired to teach you that you are worthless, that you are less than, a society in which the basic freedoms taken for granted by most people in your country will have to be literally fought for, sometimes to the death--when this is the world in which you are immersed from the day of your birth, then the recovery of your “birthright” of human dignity and the necessity of grappling with what Baldwin called the “rock of ages”--that inheritance of suffering and pain that has accrued for hundreds of years, forming into the bedrock of the nation--becomes the work of a lifetime.

But for Baldwin, this work belongs to an entire people, to all of us. “The conundrum of color,” he wrote, “is the inheritance of every American.” Facing the fact that we are each created with this unimaginably deep need for love, a desire to be affirmed to the very core of our being as good, as worthy, as one who is, in the fullest sense of the word, a person, we also must face the fact that, in a unique and specific way, our world as Americans has been formed around both a denial of this love, and a denial of this need.

After 244 years of brutalization and bloodshed was followed by a war that turned brothers and sisters, mothers and fathers against one another, it shouldn’t surprise us that many have felt inclined to try to forget this history--to, as they say, “move on.” And yet, if we actually listen to the experiences of one another, if we actually study what has occurred in this country since 1865, we will quickly discover that 244 years of slavery cannot be undone, that in some way our history will always shape us. If we truly want to be free, rather than determined by the past, we will have to grapple with this fact.

From the 1860s to the present, surges of violence and upheaval across our country have been followed by periods of relative calm and supposed stability, yet these hid what was just beneath the surface: the astounding reality of each person’s capacity to consistently deny the humanity of another human being--a denial that haunts us until today.

In the face of this reality, we risk entering into bitterness, hatred and nihilism, either through adopting a racist attitude ourselves, through continuing to ignore the problem at hand, or through attempting but failing to resolve it. If we pretend it does not and never existed, or repeat that mantra of complacency--“Well, I’m not a racist!--” we can live in a banal and lukewarm bath of contentment, patting ourselves on the back about “how far we’ve come as a nation.”

Or, acknowledging reality, we might attempt to assemble a system that guarantees the total eradication of prejudice by eliminating those who transgress the norms imposed by the system, an effort to completely externalize evil by engaging in witch hunts and purifying our communities through violent exclusion. In the same country, even in the same city or home, we can live in a variety of parallel worlds that each respond or fail to respond to this traumatic past in different and often entirely irreconcilable ways.

According to Baldwin, none of these responses get to the root of the problem. He proposes that the origin of the slave trade was not necessarily the evilness of the traders and owners but rather their lack of awareness of the needs of their own humanity. The trajectory of racism in the U.S. is the result of a people alienated from who we are as beings created for relationship. This alienation from ourselves, this lack of understanding of our own need for love and unity, has often convinced us that power and hatred are more satisfying ends to pursue. In fact, as Ta-Nehisi Coates has recently argued, “Race is the child of racism, not the father.” In other words, the concept of race itself was generated out of this supposed need to oppress the other rather than out of any truly fundamental difference between groups of human beings. It is our blindness that allows us to think we can own another human being, deny him rights, kill him out of an irrational fear--consider him our enemy rather than our brother or sister.

Baldwin suggests that the only remedy to this evil is an encounter that can reawaken our own personhood. It is those who take the risk of allowing themselves to be loved who can begin to discover their own need, and to respect that same need in their neighbor.

The encounter with Baldwin’s thought has helped me gain a deeper freedom to encounter, listen to, and live with others in a new way. It has also provoked me to engage in a more serious study of the history of African American experience in the United States and a broadening of my understanding of American literature to include voices and experiences far outside of my own. As a teacher, I find myself excited to enter into this endeavor and the dialogue it will entail with my students and colleagues as well.

I feel a renewed desire for charitable work, in which I am always mysteriously allowed to receive myself once again through the encounter with others who show me my own need for mercy and healing. I also find an interest in familiarizing myself with my local government and public institutions, and seeking out a path toward the common good in the societal structures and organizations that shape the place where I live.

Baldwin confirms what we have learned from Father Giussani: reality is positive. In front of the “conundrum of color,” fear and dismissiveness have no place. There are endless creative possibilities available when I begin from a position of openness and curiosity in front of reality.