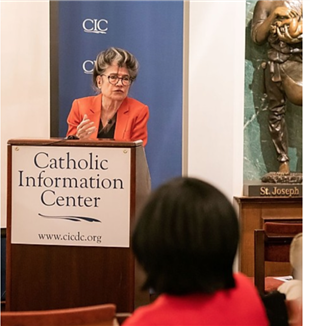 We met on an unseasonably cold autumn evening at the Catholic Information Center, on K Street NW, in the heart of the nation’s capital. The occasion was the fifth anniversary of the death of Monsignor Lorenzo Albacete and a new publication of his writings, What is Christian in Christianity? But the real stimulus of the evening was a friendship that has formed among some of those who knew Monsignor and want to share him—his writings, his stories, his presence--with others. The group, now formally organized as the Albacete Forum, had invited three figures to testify to Monsignor’s continuing impact.

Helen Whitney’s testimony anchored the presentation. Whitney, an award-winning producer of documentaries for PBS, told of meeting Monsignor in a moment of crisis. Her work on a documentary on Pope John Paul II had stalled. Between the loyal testimony of the pope’s supporters and the vocal criticism of his critics, Helen struggled to find a sense of the whole man, a narrative thread she could follow. She was ready to give up. Someone pointed her to Monsignor Albacete, a friend of the pope, and she called him one night. Three hours later, she was back on the project. Monsignor had provided the understanding of the pope as a “richly-layered” figure of darkness and light, a complex portrait, that enabled her to go forward.

They became friends, and she would find herself calling Monsignor or meeting him to talk. Their conversations ranged over ”our childhoods, his cherished brother, my divorce, his relationship, books, music, his daily questioning.” A self-professed agnostic, Helen spoke movingly of Monsignor’s witness to a group of friends, believers and non-believers, in her own living room: “all of them were rapt” as he expounded upon “the great Mystery.”

Monsignor witnessed to her, Helen said, “that faith is found in everyday life, and these ordinary experiences of joy, of ecstasy, of mystery, point us to a divine reality. They were true signals of transcendence.”

“I believe his true missionary work was to the secular world,” she added. “He was a kind of Saint Paul to the unbelievers, to the disenchanted, the seekers. Through his wit and sophistication, through his eloquence rooted in a deep understanding of the human comedy, he was a bridge to this world. . . He made us doubt our doubt.”

Monsignor’s ability to speak to such a wide range of people, Helen said, had to do with “this very unusual faith, which. . . was both passionate and visceral as well as endlessly questioning. . . . He said, ‘I get up every morning and I have to ask myself—what is it that I believe?’”

Helen’s witness ended on a personal note: “I felt that I was known by Lorenzo in a way that one is rarely known in this busy, bustling world. . . .I can almost hear him. . . saying ‘Helen, death is not the final word. The essential point of this religion that I have given my life to is that it has narrowed the mystery to one man in history. This is the original scandal. Our savior is a failed Palestinian wandering around the Palestinian countryside. And I want him, not abstractions, not theology, to be with me when I die.’ And I believe he was.”

Helen then screened a short film she had put together for the evening, a compilation of some of Monsignor’s contributions to three of her documentaries, John Paul II: The Millennial Pope, Faith and Doubt at Ground Zero, and Forgiveness: A Time to Love and A Time to Hate.

Cultural commentator and writer on Church issues Kathryn Jean Lopez spoke next. She had met Monsignor through his writings in the monthly Magnificat and found that they fascinated her in the same way that Luigi Giussani's did: “The magnetic power of beauty and truth and goodness always seems to be quite clear, almost in every word.”

“Reading Giussani and Albacete,” Lopez said, “it is quite clear that it is about rejecting being transactional about anything. We are so transactional in so many of our relationships without even knowing it as a coping mechanism. . . . It is also about seeking to live Eucharistic amazement in the world, really being present to people, really living a sacramental life.”

Rounding out Helen and Kathryn’s contributions was that of Fr. Lee Fangmeyer, a pastor in the Archdiocese of Washington and member of the Fraternity of Communion and Liberation.

Fr. Lee was able to attend many priest retreats with Monsignor; they were both “beautiful and hysterical.”

“The great gift of Lorenzo," he explained, "is that he becomes a reference point for everybody, whether you have faith or not, because of his ability to communicate the human so freely, with such humor, intelligence. . . .[and] the awareness of his own humanity and his suffering. He used that as a way to understand us, to allow us to enter into him. He brought us in front of this Mystery. He lived this radically every day.”

“When you went to confession with him, you understood that he was right there with you,” he added. 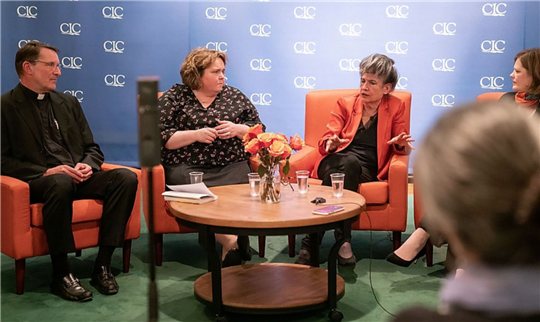 In one priest retreat Monsignor spoke to the question “What you are you looking for?” Fr. Lee was struck by Monsignor's way of answering it. “He gets down to something that we can all relate to. He would say ‘I don’t know what I want’--until he gets to the one sentence. . . ‘I just want to have a good time’.”

“He is not being trite or superficial,” Fr. Lee continued. “He is identifying something in himself that you can identify with as well.”

“Priests. . . can fall back into the easy categories, we can become functionaries. Do we take time to ask these questions for ourselves? Lorenzo had all the theology, . . but then he would come right back to his own experience and let us enter with the tenderness he had for us.”

I was in a privileged place this evening. As the moderator of the event, I had been able to talk to the panelists in advance and had already heard their testimonies. And yet, in the moment and now for days afterward, I am moved in a new way. What had struck me from the first moment I had met Monsignor, as a budding theology student in the early ‘90s, came back with full force: here was a man who lived in a seemingly impossible place of utter vulnerability, suffering reality in all its complexity.

His life draws me and challenges me. I, too, can be one of Lopez’s “closed doors.” Like everyone, I have particular challenges that will not just magically go away. But I often want to live in a way that my suffering is set to the side, neatly packaged, so that in my interactions with people I am “normal,” “okay.” I slip easily into the “transactional.”

But living thus, I remain outside of other people’s experiences, even outside of my own. Monsignor challenged the priests to begin the work of ministry with themselves, to let the questions and problems of life take carnal form in them. He did this himself, and by taking that path of suffering his own humanity, he opened a door to others. The friendship he shared with Helen is the kind of thing I desperately want in my life.

So, in these waning days of 2019, I am trying to live my circumstances differently--trying less to “solve” situations so much as to “bear” them, yielding to my fragility with humility and humor—like Monsignor.