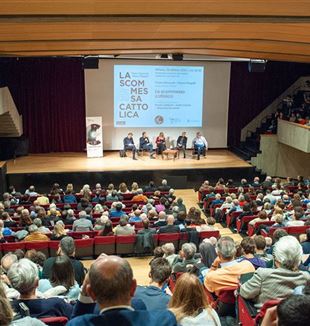 "Is there still a nexus between the fate of our societies and the events of Christianity?" This is the question that La scomessa cattolica [The Catholic Bet] poses, written by Chiara Giaccardi and Mauro Magatti, professors of Sociology at the Catholic University, recently presented in Milan, with the participation of psychoanalyst Massimo Recalcati and Julián Carrón, as well as journalist Mario Calabresi, who moderated the discussion.

Let’s return to the initial question posed. It seems to develop from Jesus’ question from Luke’s gospel: "When the son of man returns, will he still find faith on earth?". And it echoes Dostoevsky’s question from Demons: "Can a cultured man, a modern-day European, still believe, really believe, in the divinity of the Son of God, Jesus Christ?” It echoes the question but also, in a way, displaces the question with respect to today. And today, the contemporaneity which the book comes to terms with, Calabresi summarizes, is that of a Christianity that is growing in the world and that is in decline, tending towards irrelevance and aphonia, in Europe. The "question" is rephrased as follows: "In the empty skies of Europe, is there still room to question God?” In other words: "How and with what consequences is the question of meaning drying up?” 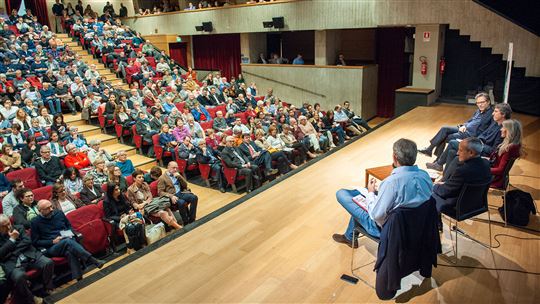 The book does not respond to these questions from a theological point of view, but "by putting our professional sociological competence in dialogue with the personal and existential dimension. Starting from that question, which concerns everyone". Magatti agrees with Olivier Roy, political scientist and Islamist, who identifies, in the phenomenon of 1968, the acceleration of the disconnection between European culture and Christianity. This leads us to ask ourselves: "Does Europe still exist if it stops dialoguing with its Christian roots?". And: "Can faith exist without intercepting todays’ anthropology, that is, what really happens in the lives of men".

1968, ok. But the book identifies the origin of this detachment five centuries ago, and Fr. Carrón emphasizes this: "The Protestant rupture, the wars of religion, the consequent idea that an agreement on values is needed, born on the trunk of Christianity, but now secularized, separated from religion. After 1968 the disconnection accelerates and becomes visible because the "values" are no longer shared. The glue has held out for a while, now it no longer holds. Magatti and Giaccardi’s book points out this fact. It’s the change of epoch that Pope Francis speaks about". And the Church? "She has not been able to intercept this question. Hence the general lack of interest in the religious question; not a struggle against Christianity, but indifference and apathy". 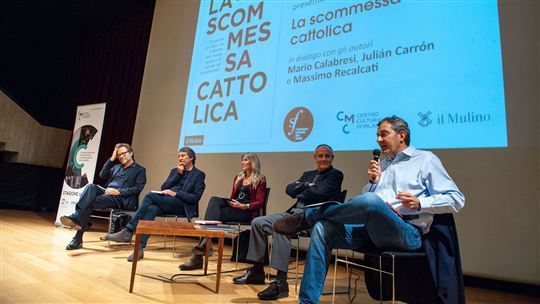 Carron highlights another aspect that the book addresses, namely that "even modernity has had to deal with the attempts of Enlightenment, measure its results, verify if it was able to offer proposals that lived up to the questions”. In a recent interview – Carrón recalls - the philosopher and psychoanalyst Galimberti indicated that "nihilism, in the void of meaning" was at the heart of the drama of the younger generations. He quotes André Malraux’s bitter snapshot [The Temptation of the West]: "There is no ideal to which we can sacrifice ourselves because we all know the falsehood, we who do not know what the truth is". Are the Church and modernity, at least in some way, facing these challenges? And what steps have they taken?
But this will be the subject of the "next round".

From his point of view, Recalcati reads - and appreciates - Giaccardi and Magatti’s work, seeing, at its center, the "figure" of faith and its relationship with "meaning". Specifically, he shares that Christianity’s modern enemy is abstraction (Magatti-Giaccardi), that is, scientism (Recalcati), the "fetishism of number" evicts the "charisma of the father". It erases his face, his proper name, that are irreducible to abstraction. He affirms that "life is the place of truth", and that truth and life cannot be separated. Not even faith and hope can be separated from charity, from love, as contemplated by Pasolini in the Corsari writings, because they would generate delusions of the omnipotence of totalitarianism. Finally, and perhaps most importantly, Recalcati welcomes the fact that La scommessa cattolica develops a "non-perverse" conception of the word "lack". In fact, lack "is not less, is not to be understood as deprivation or scarcity (to be healed with more and more objects of consumption, hence the bulimia of consumerism), but it is a plus, it is the engine of desire. Or the place of "excess", to use the word used by the authors. A force and not a mutilation.

Chiara Giaccardi speaks of "drives", necessary to put the question of meaning back on the agenda. Calabrian asks her what drives. Her answer: "First, to avoid identity drift. To focus on the strength of Christianity, that does not lie in being a closed self-referential system but in the paradox" of God made man.
The second drive is "to make us of this leave of absence”, that "imbalance - desire returns here - opens unto faith as an entrustment to Another, that leavesthe chain of action-reaction, and makes life adventurous and open: faith is not secured by doctrinal means".

And Calabresi asks: in society, how do we recover the desire that, as has been said, is commodified? Carrón: "This is precisely the challenge. Desire is not taken for granted: structurally, man is desire, precisely because of his disproportion, his lack; but desire can be diverted, dulled, shrunk. This is precisely the challenge that the Church and society have to face: who reawakens desire?".
Carrón is keen to stress another point: that, anyhow, "there is something in man, in the heart of man, a desire, that is ultimately irrepressible and irreducible". Even in the fiercest nihilist. And he quotes French writer Michel Houellebecq who, in a public letter to Bernard-Henri Lévy, wrote: "I find it painful to admit that I have increasingly felt the desire to be loved. A little reflection naturally convinced me, every time, of the absurdity of such a dream: life is limited and forgiveness impossible. But my reflection did nothing, the desire persisted and I must confess that it still persists.”

To conclude: "Does Christianity have something real to pose before this question, an answer that does not erase desire? The clear clue to the answer is, for example, in Jesus' dialogue with the Samaritan woman, where Jesus reveals himself as the true water that quenches thirst, that does not suppress but responds to desire. Truth has become flesh. This is the challenge and the promise, the hypothesis to propose to those who believe they already know what Christianity is, but have never really met it".

Jesus and desire. Here is Recalcati “version”: "Desire is a call, that ignites the responsibility of the subject. Jesus magnetizes, attracts, summons; He never judges on the basis of values, but fulfils the law by proposing a living life, generative, to use Magatti’s term, capable of desire. To rekindle the fire of desire means to reintroduce a dimension of transcendence, that can be experienced here, already on this earth. Otherwise it would be a deception".

Chiara Giaccardi distils the evening with two splendid quotations. The first, by T.S. Eliot, concerning desire: "Do not fear the cry of the heart that awaits the impossible". The other by Emily Dickinson: "Those who have not found the Heaven below, will fail of it above”, it re-proposes to us the promise of the Gospel, alas, the most overlooked in the "pastoral mainstream", and yet the most decisive: the hundredfold down here.