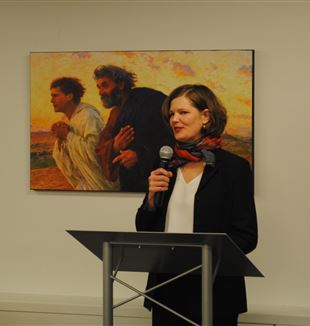 The ideal of sanctity could seem like a laughable proposal to postmodern men and women, especially within the Catholic Church. How can this institution call its members to holiness, when so many of its representatives have fallen so tragically short of this call? Furthermore, how can regular, everyday people--who have to deal daily with tedious annoyances and mundane tasks like feeding the kids and getting them to school on time, enduring the morning commute, paying bills, and cleaning the house--become like those revered figures we see represented in the statues and paintings that surround us while we’re praying at church?

“God, how could you possibly expect me to be like them? The best I can do is go a few hours without snapping at my kids!”

But it’s precisely this kind of exasperated exclamation that opens up the path to sanctity, says Lisa Lickona. She, along with Fr. Solanus Benfatti CFR, spoke about the topic of “Saints Who Were Sinners” at the most recent Crossroads event in New York City.

Lickona, a writer for Magnificat and mother of eight, opened with a personal story about what initially sparked her interest in the lives of the saints. While studying at the John Paul II Institute in Washington, D.C., she met Monsignor Lorenzo Albacete, whose office was always overflowing “with a cloud of cigarette smoke.” Albacete told Lickona and her classmates about his plan to write a book entitled “Chain Smoking Mystics.” How can a priest--who was a well-respected theologian and self-avowed mystic--smoke like a chimney?

It was this encounter with such a paradox of a man that made her curious about the real stories of the saints and the “human” dimension of their lives. Though she had always felt a huge gap between herself and the saints, she soon came to realize that the saints’ human weaknesses and struggles were “at the heart of what made it possible for them to be saints.”

“It’s not their own efforts that make them holy … it's a person, it's a someone. And that someone is the person of Jesus Christ. This is what hit me square between the eyes. The saints are people whose whole humanity has been taken up into this relationship with Jesus Christ, and he is the one that carries them forward.”

“Saints are people who bring everything to the table in their relationship with Christ: their mistakes, their problems--and they offer it all to Him.” St. André Bessette, for example, as much as he is revered for his dedication to the sick, was also known for having a horribly short temper. But even this he put “on the table” in his relationship with Christ. While learning more about his story, Lickona discovered that he had a tumultuous childhood, being orphaned at the age of twelve. “Of course he had anger issues! The saints’ humanity doesn’t just disappear. Instead, they engage everything, every part of themselves, and offer it to Christ.” Contrary to what we may often think, sanctity does not happen overnight. “It took time for the saints to change.” 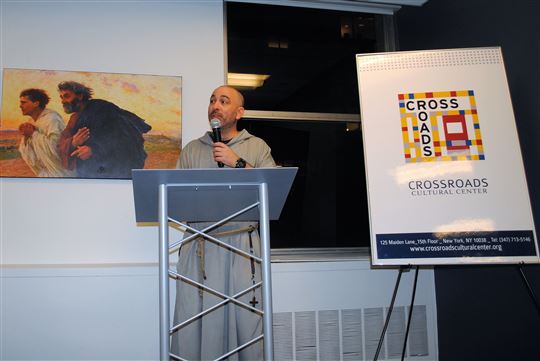 Benfatti, a friar of the Franciscans of the Renewal and author of The Five Wounds of Saint Francis, spoke about this topic in light of the beloved and elusive figure of Saint Francis of Assisi. “Francis is thought of by many as the greatest of saints, even as the ‘other Christ’--the alter Christus. But his remarkableness is not an indication that he was immune to the same human fragility that we have.”

Upon examining his early life, one will see the particular weaknesses Francis struggled with, and which stayed with him after his conversion. Benfatti highlighted his attachment to comfort and luxury, and explicitly mentioned his fear of touching lepers. He also spoke of Francis’ attachment to the ideal of chivalry, “of holding himself up high,” which made it difficult for him to beg for money and goods--a true embarrassment for a chivalrous knight.

Perhaps most striking was Benfatti’s retelling of the well-known story of Francis receiving the stigmata, which many people think of as his “reward” for living a life of intense holiness. Instead, Benfatti paints the picture of the time leading up to his receiving of the stigmata as consisting of a struggle to be patient and with bouts of withdrawal.

“This miraculous event has to be read against the events that led up to it. The seraph and the stigmata were not evidence of rewards for his conformity to God’s will. Instead, he experienced them as mercy, as a compassionate wake up call, bringing him out of his relapse, and back to being someone who can look into the face of the other. It was an experience of God’s fiery love, which shook him up and took him out of his isolation. It was a concrete reminder that he would have for the rest of this life of the love of the incarnate God for him, a sinner, and for the rest of mankind.”

Why is it that we often conceive of holiness as an ideal we have to reach by our own efforts? Why do we so easily fall into the heresy that Pope Francis calls “neo-Pelagianism”: relying on our own will power to reach heights that only God is capable of bring us to? The evening’s speakers portrayed the “problem” of human weakness as the door through which Christ’s mercy enters. It is precisely these “problems” of ours that make it possible for us to begin to live lives of sanctity, because they are what bring us to our knees, begging for Christ to come meet us where we are.

When we attempt to live moralistically, we are being deluded by the fallen notion of our own self-sufficiency. Above all, explained Benfatti, we do this because we are afraid of depending on someone outside of ourselves. “When we are afraid, we legislate.”

This fear of dependence and the error of moralism is something Fr. Luigi Giussani repeatedly addresses in Morality: Memory and Desire: “Moralism is thinking that we can be just by applying laws of behavior, doing good according to our own instinct or our own conception…” Instead, Giussani exhorts us to look to “the one[s] whom Christ has put next to us...our brothers and sisters in the community. Through these brothers and sisters...we become capable of something more human, more just...”

The event left me with an increased desire to depend on the saints, both those who have been canonized and those who are my “brothers and sisters in the community.” It is through these faces that I experience a kind of love that brings me out of my self-absorption and shame, and allows me to see myself, sins and all, as a precious tool for God’s mission of sowing seeds of love in the world.

I decided to revisit the Pope’s words to the members of Communion and Liberation back in 2015, which resounded ever more loudly in my heart after hearing from Lickona and Benfatti: “The privileged place of encounter is the caress of mercy of Jesus Christ on my sin...It is thanks to this embrace of mercy that one feels like answering and changing, and from which a different life can flow. Christian morality is not the titanic, willful effort of one who decides to be coherent and who succeeds, a sort of solitary challenge in face of the world.”