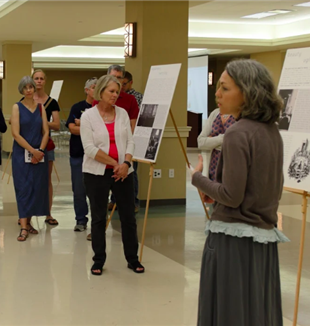 A social activist, writer, mother, and co-founder of the Catholic Worker movement; Few Catholics in American history can compete with Dorothy Day’s impact on society and the Church.

On September 20 and 21, the Overland Park and Lawrence CL communities teamed up with local parishes and Marcie Stokman, founder of Well-Read Mom, in a gesture to witness to the wider community the impact Day continues to have on their lives.

“She has become my mentor,” said Stokman in an introduction to the exhibit. “She has impacted my life for the way she loved literature, the way she faced her loneliness — which brought her to conversion — and the way she embraced motherhood."

“In the midst of paradox, Dorothy Day lived an impossible unity,” Stokman continued, “and at the root of that unity was a rock-solid faith in Christ and a complete seriousness about living the Gospel.”

Presented for the first time in January at the 2018 New York Encounter, the exhibit tells Day’s story through her own words and the witness of others.

Larry Bowers, who attends School of Community in Kansas City, Kansas, saw the exhibit in New York and was excited by the opportunity to bring it to the area.

“Today everything seems to be split into camps,” he said. “Rally cries seem to be projects rather than asking how do I live my relationship with Christ.”

Embodying seemingly paradoxical values, Day lived the reality of her times and culture with the authentic desire to see Christ present everywhere.

“Dorothy Day gives me hope that you can do that in the Church and do it without having to be ideologically political,” said Bowers. “You can live the tension of faith and humanity within the Church.”

Reminded of a moment in Why the Church, Bowers pointed out that for Giussani it was clear that the human failures of the Church are not an obstacle to encountering Christ — a truth Day testified to by how she lived her life.

“We are the body of Christ,” said Stokman, “and the Church is hurting right now. So, it’s time to ask ourselves, do we run away? . . . Or do we resist and move into [it] and beg and ask for Dorothy Day’s intercession?”

Marina Carrizosa Ramos, the responsible of the Overland Park community, had the initial idea to bring the exhibit to Kansas.

“I saw Christ the whole way,” said Carrizosa Ramos “and in the process of preparing the exhibit my life was changed. [...] I learned about my dependence and who the other is for me.”

Members of the Kansas City, Overland Park, Lawrence, Kansas, and Maryville, Missouri, Schools of Community were invited to partake in the exhibit, sharing during the exhibit how they had been struck by certain paradoxes of Dorothy’s life.

“Almost everybody who approached me said they had never seen something like this [exhibit] before,” said Carrizosa Ramos. “That struck me because it was obvious that what they were perceiving was a novelty — something new and different for them. [...] They were surprised by the fact that we did it as a community.”