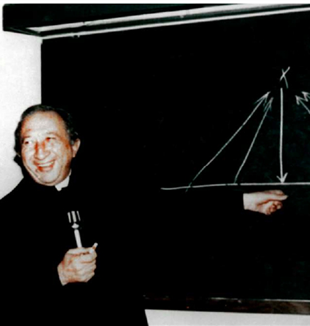 The following review has been republished with the permission of Reading Religion.

Alberto Savorana has written a comprehensive, deeply researched, and insightful biography of Luigi Giussani. That this name is not familiar to the American public is the best testament to the importance of this book. Luigi Giussani (1922-2005) was an Italian priest from the Diocese of Milan who decided to abandon his promising academic career as a professor to teach religion in high school. His life and charisma are at the root of the Catholic lay movement Communion and Liberation, which has spread across the world and has had an significant role in shaping Catholic life and theology before and after the Second Vatican Council.

Giussani decided to devote his life to the education of youth because he perceived the urgent need to help them rediscover the terms of a real faith, namely, one that would show itself as relevant to life's needs (168). He wanted to communicate to them what he discovered in his own youth, namely that God is the destiny for which human beings are born. God is the endpoint, the happiness that is the answer to the heart's insuppressible need (47). To do so, Giussani set out to return to the essential elements of Christianity, continually proposing three fundamental ideas.

First is the idea that Christianity is a fact, an event. Doctrines, moral laws, liturgies, and prayers are all secondary (171). Above all, Christianity is an announcement (259), the encounter with a presence that introduces an irreducible novelty (412). The second idea that Giussani emphasized continually was that Christ is the central point of life, of everything. Christ is the root of a new vision of oneself and of the world. Christ frees life, he allows life to be life (180), and everything—eating, drinking, sleeping, living, and dying—is to be judged starting from him (172). Finally, Giussani insisted on the fact that a person cannot follow Christ, understand him, and be faithful to him without the church (180). Christ, the light of the people, shines on the countenance of the church. It is in the face of the church that Christ tracks me down in my wanderings and fills me with himself (316). Christ remains contemporary in the company of those who follow him, and a person can live Christianity only in community (151).

Savorana has chosen to tell the story of the founder of Communion and Liberation by using mainly Giussani's own words. The author develops the account of Giussani's life and thought by carefully weaving together a vast amount of lectures, dialogues, notes from private meetings, and writings. The result is that by the end of the book the reader has the perception of having learned Giussani's story from Giussani himself, as the voice of Savorana continually remains in the background. This feature, which is what makes the book interesting and engaging, is also the book's main weakness. In the attempt to let the reader encounter Giussani, so to speak, directly, Savorana does not provide a lot of background information to describe the context in which Giussani operated. The result is that many names and events that are mentioned in passing will be meaningful only for those who are very familiar with Italy, its culture, and its recent history. The book is also very long. Savorana has not attempted to summarize Giussani's biography and thought, choosing instead to report fully every meaningful episode, conversation, and anecdote of his eighty-three years of life. The combination of these two things might make it difficult for many to approach the book, thus creating a barrier to engage with Giussani, whose experience and proposal are both compelling and current.

Despite its shortcomings, though, I would strongly recommend the book. Those who are interested in learning about Giussani will find it an irreplaceable resource. This work will also be valuable to those who study either the religious and political history of Italy or the evolution of Catholicism after the Second World War, both of which cannot be narrated fully without considering the contribution of Giussani and Communion and Liberation. Christian theologians will also benefit from the work Savorana and his translators have done to make accessible in English a theologian whose way of describing faith and its role in people’s lives anticipated the theological developments of the Second Vatican Council and contributed to implementing them afterwards. Finally, the book will also be of interest for people reflecting on topics such as education, the relationship between faith and politics, ecclesiology, the theology of suffering, the value of poetry and literature, biblical exegesis, ecumenism, and spirituality. Giussani engaged at length with these and many other topics, and readers who might be interested in specific conversations and problems, rather than his whole life, will be able to enjoy, and be inspired by, some of the chapters or sections of this book without having to read the entire text.