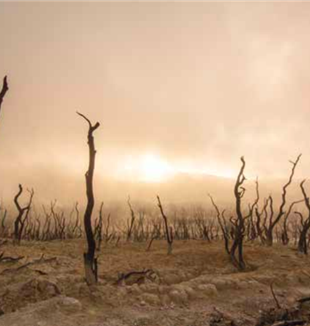 In these recent months, we have all returned in one way or another to the events that took place 50 years ago, May of 1968, the point of departure for changes that have determined our lives and thought today. What does a figure like Job have to do with those Parisian youth who clashed with police? Why propose at the Meeting, now, an exhibit on a book written 2,000 years ago?

There have been many attempts to understand the roots of the movement promoted by the young people of that time, and to explain its consequences for present-day culture. Without a doubt, a break with tradition and the past, the “killing of the father,” is one of the themes raised by the demands brandished by the young people of that hour. The slogan “The present, only the present!” has remained as the paradigm of a will to eschew any form of dependence and of an affirmation of an autonomous “I” whose point of departure is reason alone.

The Book of Job is illuminating on these points. In its pages, we find a battle between two mentalities, the “autonomous” one (represented by Job’s friends), which excludes from the start the possibility of a nexus with something beyond the limits of “reason alone,” and the mentality that emphasizes “dependence,” which both establishes a battle with God and allows one to yield to a good Presence that imposes itself (as did Job).

Job’s friends censure the question of the why of suffering, a question that can only be addressed to God. For them, God is reduced to a clear rule: those who do evil are punished with evil. If Job suffers from his punishments, it means that he deserved them. They assign little importance to his proclamations of innocence, which were backed up by real facts. Instead, the true interlocutor for Job is not his group of friends, but God Himself. It is from God that Job asks an explanation, and it is with Him that he wants to engage in battle.

The biblical book grapples with the problem of the suffering of the innocent. In this sense it is a an appropriate book for our times because today, as never before, this problem challenges modern reason. The scandal of evil is a torment for a reason that cannot have everything submitted to its measure, and precisely in this the biblical book makes its great contribution: Job’s reason is always in dialogue, even if in the form of questions or rebellious challenges to God. What happened instead to modern reason?

After 1968 (but even well before, after the shift brought about by the Enlightenment), reason has found itself lost. It is alone. It conceives of itself in autonomous terms. It has lost its bond with the real that makes it naturally religious, its bond with the particular history of Christianity, which introduced the figure of God, the Father of Christ, as a good Presence in history.

In this sense, the movement of May 1968 was a renewal and recasting, and sometimes a radicalization, of a shift that began in the Enlightenment. Let us try to follow the stages that saw the weakening of the image of the Father as a good Presence in history who accompanies our lives, a weakening that abandoned reason to a solitude for which it was not made.

In 1755, the sensibility of European intellectuals was challenged by an earthquake in Lisbon, which caused over 60,000 deaths. A radical question about God’s goodness and justice emerged: How could He permit such a thing? The reaction to the earthquake that would have the greatest influence on the history of thought was that of Immanuel Kant, who affirmed that the problem of evil and unjust suffering challenges the justice of God, and asserted that this problem cannot be resolved by theory. A gesture of moral rational faith enables us to affirm that God is in a moral relationship with His creation. He wants the good for it, notwithstanding appearances to the contrary. We do not have access to the supreme wisdom, but, beginning from the moral law we find within us, we make a gesture of trust and conclude that God, who is present in this moral law, must also Himself be moral in relationship with His creation. We must remember that Kant rejected any access to God through means other than practical reason; that is, a recognition of God identified with the moral law we find within us. For him, an event in history cannot be a way of accessing universal truths. It is interesting to observe that before the disaster in Lisbon there had been other tragedies in Europe, perhaps even more “dramatic,” for example, the Black Plague during the Middle Ages. But these events did not represent an objection to God’s goodness and omnipotence. In the mentality of the people and in Western thought of the time, divine goodness was identified with the figure of the suffering Christ who died on the cross for us and was merciful to women and men, a Christ who bent over the wounds of plague victims in the figures of the many saints who served the sick, to the point of contracting the plague themselves and sometimes dying from it.

In the second half of the 1800’s, trust in a good God was still possible: the Christian tradition permeated the mens of Western women and men, at least as a set of values that included the “Christian God” (the “Good Father” who the prophet Jesus, a man among men, communicated to us at the apex of historic religiosity). Once Kant declared that access to God through the historic event of Christ was not rational, or in other words, once he detached himself from the “statutory churches” or “historical churches” (those born from the historical Christ in time) to propose a universal church based on a moral religion that preached a rational faith accessible to everyone, then the “good God” transmitted by the Gospels, and the morality that derived from Him, began to become hazier.

The problem is that it is not necessarily true that reason alone can reach a rational faith like that proposed by Kant. Today, the opposite has become clear. Paradoxically, Kant’s faith was too Christian. Having removed the foundation of the building that is Christian morality – which is Jesus Himself, alive and transmitted in the tradition of the historical Church – that building collapses.

At this point, Job returns. As will be seen in the exhibit, the answer to his sufferings was not an explanation, but a good Presence. Toward the end of the book, when God appears, He does not provide any answers to Job’s questions, but places him in front of the wonder of a creation that points to the presence of a creator that Job had made unnecessary. “I had heard of You by word of mouth, but now my eye has seen You,” Job concludes. Now he has a You to ask his questions about pain. Outside this particular story, human reason, in front of the enigma of pain, is abandoned to a terrible solitude.