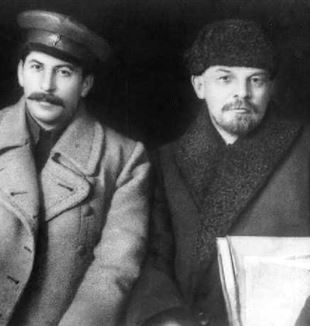 "The Russian Revolution is the result of the historical and spiritual path of Western man over four centuries." In this affirmation by the philosopher Semën Frank, written in 1924 while he was in exile in Berlin, we find a summary of all the reasons why the Bolshevik revolution of 1917 represents not only an event in the past, but a question and provocation to "Western man" today. We cannot ignore this provocation without falling into a culpable ignorance, for, as Frank notes, "Such a result … is seen not only in the Russian Revolution, but rather manifests itself clearly in Europe."

Personal distress
Franks words prompt some objections. These objections - in part the product of a subtle fear that undermines our desire to claim that we are "beyond" the blood and terror evoked by the memory of Bolshevik revolution and its leaders - legitimately demand that we clarify how and where a similar chain of causes and effects exists. We know well, of course, the historical narrative most common in today's textbooks: Imperial Russia was not without her faults, and economic and social underdevelopment, rampant poverty and starvation and an exclusive Czarist educational system led (with varying degrees of inevitability, depending on the historian) to violence in 1917. Therefore, the objections run, the Revolution would not represent a repeatable phenomenon for the Western world.

But this opinio communis is itsaf the child of an historical approach that was interested in proposing the Revolution as a sort of providential "catharsis," and, in any case, as the harbinger of a particular objective: the undeniable and irreversible improvement of the condition of the people exploited and oppressed by tyranny. 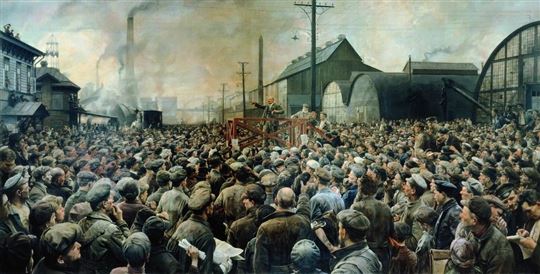 At the last Meeting of Rimini, Adriano Dell'Asta, Marta Carletti and Giovanna Parravicini - the creators of the exhibit entitled "Russia 1917: The Broken Dream of an Undiscovered World" and the authors of a volume by the same name which served as the exhibits historical-conceptual basis - retraced the contemporary sources from the first years of the 20th Century, discovering that the economic, cultural and social conditions of the Russian Empire were not more difficult than those of the Western nations. Their research put them in contact with a society in rapid transformation, pervaded by a positive dynamism and a shared expectation that the new century would be an era of renewal and development. The negative factors that prepared the ground for the catastrophe of the Revolution lie somewhere else. And they send us back to a dimension of personal and social distress that demonstrates striking analogies with the current situation.

We should consider, for example, the phenomenon of terrorism, which shook Russian society in the second half of the 19th Century and worsened in the decade prior to 1917. These attacks killed and wounded thousands of victims; in their aftermath, between 1905 and 1911, almost 2,500 people were condemned to death. If the techniques used then (car bombs, suicide bombers, individual attacks and indiscriminate killings) make what we are living today simply a tragic déjà vu, it is decisive to grasp how the terroristic ideology was accompanied by a growth in nihilism and an increasingly absolute lack of consideration for the victims. These victims were reduced to mere symbols of power (the Czarists), incapable of dialogue, and the loss of human life was rationalized as the consequence of necessary violence against a society considered already in decomposition. 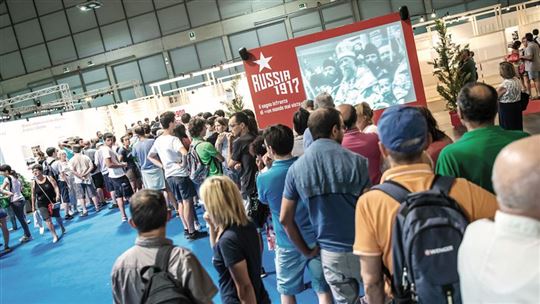 A fatal path
By the 19th century, Czarism had become an autocratic regime only formally rooted in the Christian and Byzantine principals that had marked its nascence. The "symphony of powers" that presented the figure of the emperor as the "father" of his people had given way to an increasingly pervasive and repressive state apparatus, above all guided by the idea - fully shared by Nicolas II - that even an inchoate and limited form of representative democracy would be something horrible for the people. Instead, the Czar was "blessed by God" and had the task of guiding and education them.

But the decadence and decline of the Czarist principle, inspired by a Christian ideal, was not due only to terrorism and revolutionary currents. Its roots, Frank explains, are much deeper, going back to the 18th Century "search by the free-thinking dignitaries of the court of Catherine II" that "would not have been possible without the spirit of Peter the Great and his reforms." In 1917, a few days before the October Revolution, Sergei Bulgakov wrote, "Peter introduced into the ecclesial structure the Protestant principle of a State Church (cuius regio eius religio), transforming the Church into a synodal department. And at the same time, he modified the old concept of the 'Orthodox Czar,' substituting it with a German-style police force and bureaucracy. … Europeanizing Russia, Peter introduced the venom of the Protestant culture into Russia, and at the same time paralyzed the life of the Church, keeping her from a universal consciousness. Today we see the outcome of the fatal path we have walked to the end, an outcome that is equally disastrous for the State as for the life of the Church."

This clear and dramatic diagnosis begins to reveal our link with the Russian Revolution: the reference to the Enlightenment, to Protestantism and to German absolutism that explain the degeneration of Czarism and the reduction of the Orthodox Church (at least in its institutional parts) to a mere department of the State - thus preparing the ground for the opposite affirmation of revolutionary socialism and terroristic nihilism - describes only the outward appearance of an even more grave and pervasive process. Frank synthesizes the situation like this: "Socialism represents more the complement than the reversal of liberal democracy. Its fundamental motivation is inspired by the same motivation that is common to the whole modern period: to make of man and of humanity the authentic master of his own life, to give people the possibility to form their own destiny. But it leaves a void, an absence of content, and an internal contradiction of the formal freedom provided by liberal democracy: man, formally free, abandoned to himself, cannot do anything and falls victim to society. He is the plaything of economic conditions and the economically stronger classes. And then, for man to become truly free, he needs to sacrifice his individual liberty, to be gathered into a collective. And this collective, after having taken into its hands all the resources of the earth, organizes its own life on a rational basis and according to its own will, even at the cost of making the individual a slave."

We are, then, along with the Russian Revolution, in front of a "dream" that was never realized nor realizable: absolute and unlimited freedom, one that cuts off every bond with transcendence, with any principle that comes from outside or before man and one that does not recognize anything other than what can be measured with his own powers. 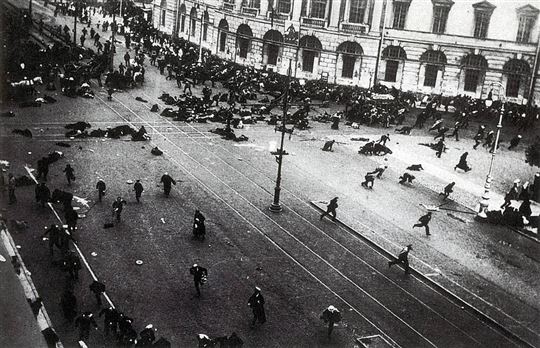 And if this tragic "dream" was affirmed in Russia with a bang, parallel to the total emptying of the religious foundation of Imperial society, then the desire for self-affirmation and the refusal of any creaturely dependence are forces that have been acting for centuries also in the Western world, just in a more gradual and progressive way. Frank understood this in 1924, anticipating the description of what we recognize as the "crumbling of evidences." "The secularized culture formed in the modern West, based on personal liberty, has created a series of non-religious principles, which are at the same time 'sacred', on which society is solidly based, and which are actually rooted in the faith to which they are opposed," observes Frank. Nationality, property, family, the power of the state, 'the rights of man and of the citizen,' 'personal dignity' - all these are traces and secular reflections of the ancient theocratic education. In the West, the disintegration of spiritual and ontological foundations, which were essentially religious, happened in a gradual way throughout the course of modern history, through a transformation that attributed a secular form through which even today the original religious essence still shines. It is for this reason that such a processes could not have a truly destructive character, or that this destructive character revealed itself only later. More than once, Europe, having reached the edge of the abyss, almost succumbing to the terror of anarchy, was saved by its conservatism, by its faith in these sacred principles."

A fundamental error
Today we are already fully aware of the outcome of this process of self-affirmation, which refuses man's condition as a creature. If in the East, this produced Bolshevism, the Red Terror, the planned economy, Stalin's purges and State atheism; in the West we find ourselves coming to grips with man's claim to shape and define himself at his pleasure, with the affirmation of a relativism that tolerates everything, except the affirmation of the Mystery of a personal "You." And though Marxism may have showed all of its flaws with the fall of the Communist bloc, the West still struggles to acknowledge the void that has been created, a void that, paradoxically, is giving rise again to phenomena like nihilistic terrorism.

A Frank concludes his observations with force. "The fundamental error of the modern epoch was only in identifying freedom with revolution, in wanting to affirm the creative depth of the human spirit, extrapolating from the divine ground in which humanity was rooted, and which constituted its only source of nourishment," Frank writes. "Humanity believed it had reached heaven, separating itself from its own roots and freeing itself in mid-air; it desired to conquer heaven and subjugate it. In fact, though, it is possible to reach heaven only if one is rooted in heaven from the start. … Through the chaos, the devastation, and the darkness of these days, we can glimpse the time when a conscious humanity will tend not toward the freedom of the Prodigal Son but to the freedom of the Children of God. If, how, and when we will see this age, depends on the one hand on the strength of our will, on the openness to sacrifice on the part of each of us, and on the other hand on the inscrutable will of Providence, which directs humanity along paths of history that only He knows."

Figures like Frank, Bulgakov, Berdyaev and many others knew how to incarnate this "conscious humanity" and found, together on the path toward God, the capacity to live a freedom that was greater than every adverse circumstance, from exile to poverty, from persecution to martyrdom. They can even become traveling companions dear to us, who are besieged by a nihilism that is no less destructive, as we learn to live in freedom, in trusting dependence and in hopeful certainty.