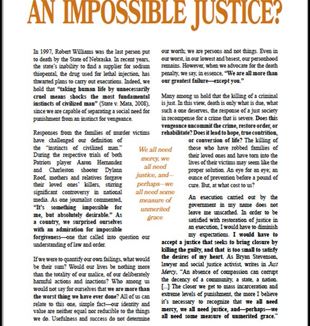 In 1997, Robert Williams was the last person put to death by the State of Nebraska. In recent years, the state’s inability to find a supplier for sodium thiopental, the drug used for lethal injection, has thwarted plans to carry out executions. Indeed, we hold that "taking human life by unnecessarily cruel means shocks the most fundamental instincts of civilized man" (State v. Mata, 2008), since we are capable of separating a social need for punishment from an instinct for vengeance.

Responses from the families of murder victims have challenged our definition of the “instincts of civilized man.” During the respective trials of both Patriots player Aaron Hernandez and Charleston shooter Dylann Roof, mothers and relatives forgave their loved ones’ killers, stirring significant controversy in national media. As one journalist commented, “It’s something impossible for me, but absolutely desirable.” As a country, we surprised ourselves with an admiration for impossible forgiveness—one that called into question our understanding of law and order.

If we were to quantify our own failings, what would be their sum? Would our lives be nothing more than the totality of our malice, of our deliberately harmful actions and inactions? Who among us would not say for ourselves that we are more than the worst thing we have ever done? All of us can relate to this one, simple fact—our identity and value are neither equal nor reducible to the things we do. Usefulness and success do not determine our worth; we are persons and not things. Even in our worst, in our lowest and basest, our personhood remains. However, when we advocate for the death penalty, we say, in essence, “We are all more than our greatest failure—except you.”

Many among us hold that the killing of a criminal is just. In this view, death is only what is due, what such a one deserves, the response of a just society in recompense for a crime that is severe. Does this vengeance uncommit the crime, restore order, or rehabilitate? Does it lead to hope, true contrition, or conversion of life? The killing of those who have robbed families of their loved ones and have torn into the lives of their victims may seem like the proper solution. An eye for an eye; an ounce of prevention before a pound of cure. But, at what cost to us?

An execution carried out by the government in my name does not leave me unscathed. In order to be satisfied with restoration of justice in an execution, I would have to diminish my expectations. I would have to accept a justice that seeks to bring closure by killing the guilty, and that is too small to satisfy the desires of my heart. As Bryan Stevenson, lawyer and social justice activist, writes in Just Mercy, “An absence of compassion can corrupt the decency of a community, a state, a nation. [...] The closer we get to mass incarceration and extreme levels of punishment, the more I believe it's necessary to recognize that we all need mercy, we all need justice, and—perhaps—we all need some measure of unmerited grace.”