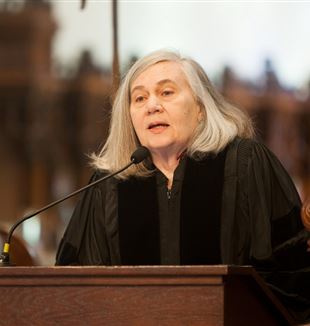 "I realize I have always believed there is a great Providence that, so to speak, waits ahead of us.” So begins a letter from one character to another in Lila, the most recent novel from American author Marilynne Robinson. The author of the letter–a preacher who is writing to the woman who will later become his wife–continues: “A father holds out his hands to a child who is learning to walk, and he comforts the child with words and draws it toward him, but he lets the child feel the risk he is taking, and lets it choose its own courage and the certainty of love and comfort when he reaches his father.”

This picture of the relationship between a child and its father contains many of the themes that Marilynne Robinson explores “I over and over throughout her works–both her fiction and nonfiction. In Robinson’sfiction, her characters serve as human, fleshy vehicles for Robinson to examine felt questions of mercy, identity, home, belonging, education, and relationships between human beings, as well as their position toward the world they inhabit.

Marilynne Robinson has now been the recipient of numerous literary prizes and distinctions, most notably a Pulitzer Prize for her novel Gilead (2004) and the 2012 National Humanities Medal. She is the author of four novels: Housekeeping (1980), Gilead (2004), Home (2008), and Lila (2014). Robinson currently lives in Iowa City and teaches at the Iowa Writers’ Workshop, a residency Master of Fine Arts program in creative writing at the University of Iowa.

Born in Sandpoint, Idaho, Robinson was raised as a Presbyterian and later became a Congregationalist. She is known for both her fiction and non-fiction collections of essays on the topics of democracy, religion, American history, and human thought. Her five collections of essays include: Mother Country: Britain, the Welfare State, and Nuclear Pollution (1989), The Death of Adam: Essays on Modern Thought (1998), Absence of Mind: The Dispelling of Inwardness from the Modern Myth of the Self (2010), When I Was a Child I Read Books: Essays (2012), and The Givenness of Things (2015).

Witness. As a thinker, Robinson identifies herself with often contradictory positions–for example, she treasures her life within her religious community, but also fiercely values her participation in her academic community. Among many current writers and thinkers who seem motivated solely by sowing vitriol, Robinson offers a refreshing portrait of a writer who draws from diverse traditions and worldviews. Her honesty and willingness to risk both encourages and challenges her readers.

“For Robinson,” says an interviewer from the New York Times, “writing is not a craft; it is ‘testimony,’ a bearing witness: an act that demands much of its maker, not least of which is the courage to reveal what one loves. ”And Robinson herself seems perfectly comfortable with the challenge.

In a recent interview with President Obama, he asked Robinson about one of her seemingly contradictory positions: how she reconciles her understanding of Christianity as inclusive and open, when the outlook of many Christians in the U.S. seems to be exclusive, resistant to challenging viewpoints. She answered, “When people are turning in on themselves–and God knows, arming themselves and so on–against the imagined other, they’re not taking their Christianity seriously.” Robinson continued, emphasizing the paradoxical and difficult nature of Christian life: “Christianity is profoundly counterintuitive–'Love thy neighbor as thyself'–which I think properly understood means your neighbor is as worthy of love as you are, not that you’re actually going to be capable of this sort of superhuman feat ... It’s supposed to be a challenge.” 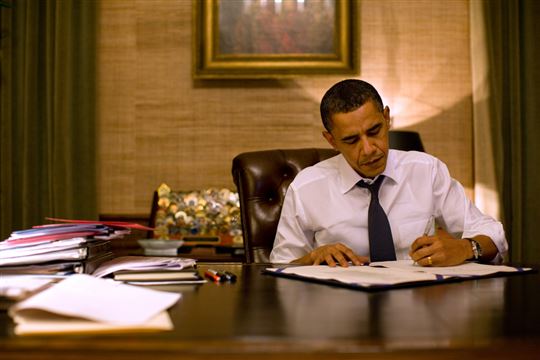 As a fiction writer, Robinson has a strong capacity to embrace paradox and tell stories in strange ways. She risks confusing her readers by asking them to work harder in order to understand. For example, in Housekeeping she writes: “The house flowed around us.” Of course, a house is not actually made of fluid material. And yet in that particular scene, Robinson’s words make poetic sense and tell us clearly about the atmosphere and setting.

There is a clear link between Marilynne Robinson’s essays and her fiction. In “Imagination and Community,” she writes, “As individuals and as a species, we are unthinkable without our communities.” In her novels, particularly in the overlapping storylines of Gilead, Home, and Lila, we see this connection played out in the lives of the characters. Gilead is written in the first person, from the perspective of John Ames, a 77-year-old Congregationalist preacher who is writing his memories for his young son, whom he will not live to raise. In Home, we hear a third-person account of the Boughton family, whose father is a close friend of John Ames. The narrative is told primarily from the perspective of Glory, Boughton’s daughter. Lila is also written in third person and is the story of mercy and love as experienced by one woman, Lila, when she comes to the town of Gilead and finds a home with John Ames, and eventually gives birth to his son.

Prodigal Son. In Home, the daughter Glory is the character who embodies the “good son,” from the story of the prodigal son; she would be the one who should reject the mysterious workings of God, who generously welcomes home the prodigal son who does not deserve mercy. And yet her name–Glory– refers directly to the power of God. Robinson sets up a predictable relationship between characters, and then works to defeat her readers’ expectations. Somehow, God is very much at work in the life of Glory, just as much as in that of Jack, who is based on the “prodigal son” figure. The way that Robinson constructs the characters and narrative, readers see that grace and mercy are also manifest in Glory’s life.

At several points throughout Home, Jack wonders if there is still a possibility of mercy for him, when he has taught the entire town to mistrust him because of his past actions (including lying, stealing, and arson), and he is unable to give his father the consolation of professing religious belief. But Jack also cannot lie about his disbelief in order to make his father feel better. We see in Jack’s action an honesty and desperate clinging to the remnants(or re-awakenings) of his conscience, while at the same time searching for something more. Why?

Robinson herself answers Jack’s doubt in her essay “Son of Adam, Son of Man,” from The Givenness of Things (her most recent collection of essays): “Say that the one earthly thing God did not put under our feet was our own essential nature. The one great corrective to our tendency toward depredation would be a recognition of our abiding sacredness ... The divine image in us, despite all, is an act of God, immune to our sacrilege, apparent in the loveliness that never ceases to shine out in incalculable instances of beauty and love and imagination that make the dire assessment of our character, however solidly grounded in our history and prospects, radically untrue.”

Sacredness. This view of the sacredness of the human person informs all of Robinson’s work. In her interview with President Obama, Robinson said, “I believe that people are images of God. There’s no alternative that is theologically respectable to treating people in terms of that understanding ... it’s being human that enlists the respect, the love of God being implied in it.”

Through an exploration of Marilynne Robinson’s fiction, readers can come to grow in a greater knowledge of themselves, their neighbors, and the world around them. And through this knowledge, can also find access to a greater communion and love. In “Imagination and Community,” from When I Was a Child I Read Books, she reminds us: “The great truth that is too often forgotten is that it is in the nature of people to do good to one another.” Reading Robinson’s works, readers do rediscover this truth.