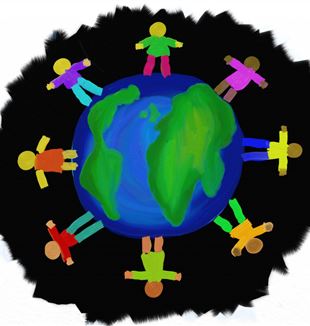 I confess: I copied. Some time ago my son, who is one of those “perpetually connected” types, told me about the ninety-minute film Life in a Day, produced by the Scott brothers (of Blade Runner and Black Hawk Down fame, to give you an idea), which is based on thousands of video submissions sent from around the world. A wonderful documentary, it’s an invitation to enjoy the wonderful spectacle of humanity in its “pure,” boiled down form, whether cooking eggs or getting married; mourning a death or toiling at work; rejoicing or asking oneself, as does the girl who appears at the end of the film, “Did I reach the height of my expectation for today?” Life in a Day won me over with a poeticism and authenticity that could never have been achieved through the traditional medium of a directed documentary.

Later, speaking with Monica Maggioni and Dario Curatolo about the documentary on the Movement, we were scratching our heads trying to figure out how to “bring to life” experiences such as School of Community or charitable work. The Scott brothers’ idea came to mind (“Let them tell us!”) and we humbly followed in their footsteps. I liked many of Monica and Dario’s documentaries that were more like movies, in that they were not dry journalistic reports, but rather had a developed narrative framed around characters and plot lines, which were stitched together with a thoughtful and creative use of cinematography and editing. This was the reason I approached them.

I have known Monica for a long time.The first piece I remember from her was a story for Italian television about a rickety bus that brought immigrants from Morocco to Milan. With Dario, after having talked a long time about the adventures of Fr. Giussani that began at Liceo Berchet, I discovered his many talents. Another great thing about Monica and Dario is that along with them, you also get the added value of their collaborators, who are also friends, including technicians and producers with a perceptive and artistic touch that is truly rare. And so, working with this team, the road was beautiful.

We received 603 films from 43 countries. Despite our careful specifications regarding the format, main themes and duration, we received a little bit of everything.This made it all the more beautiful, demonstrating that our experiment was successful, with the contributions being the source of many new ideas. There were so many amazing stories—of which we could only use short clips—that were all worth knowing in their entirety. This goes not only for stories, but also for witnesses and initiatives. Perhaps it’s time to see if we can launch a new project… After receiving the contributions, we began traveling to film the stories and the interview with Fr. Julián Carrón, we then added clips from a few dear friends (Prof. Joseph Weiler, for instance). Dario left a piece of his heart behind in Uganda at Luigi Giussani High School, and his eyes are still recovering from filming the fast pace of the streets, faces, and favelas in São Paolo. It was in the Brazilian city that we noted the most distinguishing elements of the homes of the Zerbini’s Landless Workers: their balconies and terraces. In New York, I particularly loved the choir. Monica relentlessly promoted a Spanish element in the setting for the conversation with Carrón: she wanted the unique colors and sky, and she got them.

Simplicity, humanity, and universality: this was the narrative style with which I desired to tell this story, a kind of aesthetic of the life of the Movement, in all of its drama and beauty.