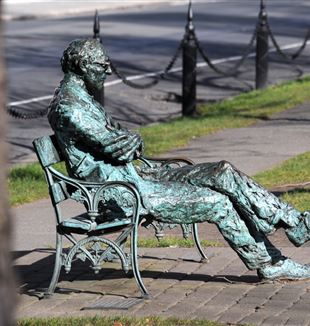 It is strange to think that any one book could change your life, but this may be close to the case in my own life. The book is Sacred Keeper: A Biography of Patrick Kavanagh, by Peter Kavanagh. The biographical subject was Peter’s brother, the great Irish poet who had lived through and just beyond the first half of the 20th century.

Peter was 12 years Patrick’s junior, the “sacred keeper” of the title, from Patrick’s description of Peter as “the sacred keeper of my sacred conscience,” in recognition of the central role played by Peter in the fulfillment of his brother’s poetic vocation. Despite the subtitle, it isn’t really a biography, but a series of reflections on aspects of Patrick Kavanagh and his life and work. “When I write about Patrick Kavanagh,” this remarkable book begins, “I write as a partisan, as his alter ego, almost as his evangelist.” Their relationship as brothers, he confides on the next page, was almost incidental: “…my interest in him is mainly as a poet.” After Patrick died in 1967, Peter became as though his ghost in the world, reiterating his perspectives, explaining and interpreting his work, defending his interests and reputation. For both of them, poetry was a moral and spiritual calling, a matter of theology rather than literature. The gift, Patrick Kavanagh believed, was to see and say things that others had to wait and hope to witness in the next life.

The two brothers remained a tightly knit unit in the cultural desert that was Dublin in the middle decades of the past century, with Peter supporting Patrickspiritually, creatively, emotionally, and materially, through many years of poverty and artistic neglect. Peter had many great qualities as a man, writer, and intellect, but perhaps his greatest gifts were his capacities for humility and love. Disabused of his own early poetic ambitions by Patrick, who told him (when Peter was 8 and Patrick 20) that a family was allowed to produce only one poet, Peter devoted himself thereafter to what he unsentimentally recognized as his brother’s superior genius. He learned about poetry so he could guide and protect Patrick, whose “ignorance” (in the sense of simplicity) both men regarded as essential to the preservation of his gift. In his role as critic/editor of Patrick’s work, Peter was rigorous and direct, and without a doubt sharpened Patrick’s sensibility for the exploration of his own gift.

Much of Patrick’s poetry is centered on the landscape and community of his home place – Mucker, near the village of Inniskeen in County Monaghan, one of the northernmost counties of the Irish Republic, bordering on the British controlled part of the island, known as Northern Ireland. He had all his life a love–hate relationship with his home place, frequently writing about it as having dragged down his poetic impulse and blocked his vision of reality. Yet many of his greatest poems also celebrate the wondrousness of this place. This paradox haunted Kavanagh all his life, frequently causing him to reject his own work in the belief that he had been lured into sentimentalism or falsity.

Patrick's Lies
When Peter went to work as a professor of poetry in the United States, the two brothers maintained a regular correspondence. In one letter, Patrick picked up on a comment of Peter’s about these poems rooted in their home village: “Interesting you say I go false in the Mucker poems,” wrote Patrick. “They are lies. I never belonged there. Terrible, ignorant, vulgar place Inniskeen.”

Patrick Kavanagh described himself as a “Catholic poet,” which was not so much an observation about his religious practice, but something much deeper: a sense that he was called to bear witness to the Mystery in the world. Each new draft of a poem was subjected to the ultimate acid-test: did it have “The Flash”? This, really, was the intrusion of the Mystery, the defining element that made a poem true.

Much of his work is rooted in the wildness of the Monaghan countryside, but later on he also wrote of the city. This manmade world, albeit in a different way, also seduced him and blocked his view of the Mystery– until his epiphany in later life by Dublin’s Grand Canal, celebrated in a series of poems known as “The Canal Poems.” In these he bore witness to “the immortal in things mortal,” the track of the wild in the materials man had extracted to achieve his own “creation.” He celebrated the beauty of the banal, and the “inexhaustible adventure” to be found on a gravel path. The Grand Canal, “pouring its redemption,” enabled him to see that the city was not necessarily the occasion of the Fall of Man, but could become a place where the Mystery became even more iridescent in breaking through man’s efforts to suppress it with concrete and positivism. What holds Kavanagh apart from the mere literary giants like Joyce and Yeats and Beckett was that he had found his way back to “the Source.” He did not regard literature as a means of chronicling the human condition, but as a chink through which we might peer into the fourth dimension of reality.

One of his persistent devices was to set out the conditions of the familiar world, beginning by describing a dreariness, even an ugliness, establishing an image of the everyday, and then transforming it into something sensational and epic. Each of his best poems performs a kind of consecration, as in “Cool Water Under Bridges,” when he describes the mature pleasure of watching life pass by, like the canal: “The evening is lifted up and in Eternity poised.” He knew the limits of words and sought always to avoid the danger of analyzing “God’s breath in common statement,” and so his words moved beyond wordiness, becoming anti-words, which belonged neither to Earth nor to Heaven. This pattern is visible in both his minor and grander works–in, for example, “To the Man After the Harrow,” which begins with a crude instruction to the harrowman:

Now leave the check-reins slack
The seed is flying far today –
The seed, like stars against the black
Eternity of April clay.

In “Kerr’s Ass,” he opens with a flat statement of the commonplace, describing from the distance of London a moment remembered from long ago:

Kerr was a neighbor back in Monaghan. The poem seems an attempt to break through inarticulacy to a place where words are unnecessary. In four stanzas, he sketches the moment in a particularity of harness and breeching and collar and reins.

Until a world comes to life –
Morning, the silent bog,
And the God of imagination waking
In a Mucker fog.

“To the Man After the Harrow” speaks of the seed, “as potent as the seed of knowledge in the Hebrew book.” He urges the harrowman to ignore the curiosity of various actors, including the worm and “the men on Brady’s hill,” to pursue his task as something God-given and immanent with Destiny.

Forget the worm’s opinion, too
Of hooves and pointed-harrow pins,
For you are driving your horses through
The mist where Genesis begins.

In “Tarry Flynn,” he opens:

On an apple-ripe September morning
Through the mist-chill fields I went
With a pitch-fork on my shoulder
Less for use than for devilment.

He describes the anticipation of and preparation for the threshing process, planned for the day. He captures the fun that invigorates the company of men as they begin their work–“chaffy gossip,” with “work thrown in to ballast the fantasy-soaring mind.” His mind flits over the landscape, taking in the drain where he caught eels in summers past, the glistening bog-holes, the wasp’s nest in a bank, the “wet leaves” of the cocksfoot grass polishing his boots. Finally he arrives at the gate to the haggard:

And I knew as I entered that I had come
Through fields that were part of no
earthly estate.

It’s probably impossible to translate Kavanagh into another language, because his words belong so intimately to the idiom of his own place and its speech, which was really, as in many parts of Ireland, a vernacular comprising an “Englished Irish,” or Hiberno-English. This quality of cross-fertilization enabled him to transcend the linear limits of English, but causes many of the poems to die under the knife of translation. Kavanagh exhibited a kind of passivity before reality that is the antithesis of the passivity of indifference which characterizes so many in our present day cultures. Kavanagh knew he had been given the eyes with which Christ gazes on reality, and that most people choose blindness. His passivity was akin to being in love, an unmediated receiving of what was gifted to his senses.

BEATIFIC VISION. “The experience, as I see it,” Peter Kavanagh explained to me, “is really prayer. Patrick believed in the divinity, so what he hoped was to get a ‘flash’ of that beatific vision, that supernatural place. Words are the least important part of it. In a poem, words burn up in a tremendous thread of something unusual.” The thought of wonder is not wonder–like talking of being in love is not like being in love. We can repeat things and not know them. Christ is nota theological concept, but something that happens now. Man is continually possessed and breathes fully when he recognizes this. Nowhere is there a better witness to this than in the poems of Patrick Kavanagh.