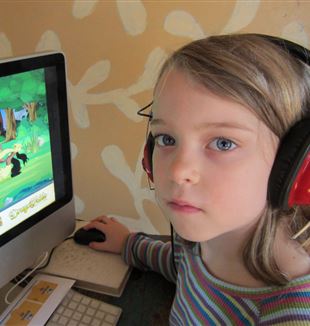 In the modern world, parents face growing problems in communicating with their teenage children in the seeming impossibility of relating to a generation that thinks differently about everything: education, friendship, communication, experience, life.

I know of this problem and do not believe it is restricted to teenagers any longer. Already a generation has come into the world that is different in some way to those who went before. Something fundamental has changed in our culture, which appears to be related to leaps in communication– what technology seems capable of delivering to us now compared to even two decades ago. There is a sense that everything has changed, that some kind of cleaver has come down hard upon our culture, severing the lines of connection to the past–and even to parts of the present. More and more people show signs of being imprisoned within technological compounds in which their immediate desires and requirements are gratified. But many worrying dimensions suggest themselves. There appears already to be a concern about addiction–to the technologies themselves, or perhaps more likely to the reduced but still rewarding satisfactions which they provide for. There is a sense that people are slipping into an adjacent but unreal world, in which they can act out the fantasy of living while actually avoiding the reality.

"There is a sense that some kind of cleaver has come down, severing the lines of connection to the past."

A Reason for Existing
Among all the literature now available on this topic, one of the most interesting is an Italian book called Gli Sdraiati, which means something like “the loungers” or “the couch potatoes”–a powerful depiction of a generation of teenagers who lie facing screens for most of their waking hours. I haven’t read the book but I have seen the author, Michele Serra, on YouTube clips, as he talks about his thesis, which really goes to the heart of things in our culture now. A left-liberal “radical-chic” columnist, Serra describes his vain attempts to engage and interest his teenage son in things that he considers important– politics, sports, walking in the mountains– which he proposes to the total indifference of his son, who passes his days texting with friends, chatting on social networks, posting comments on YouTube, all while he remains lying on the couch, apparently detached from even the idea that the real world might be escaping his attention.

Serra does not stop at any conventional moralistic idea, such as complaining that the web is bad or dangerous or even distracting. He sees more fundamentally into what’s happening, into the failure of his own generation of parents to provide their children with a deep reason for existing. He observes in his son a desire to communicate with something outside himself, something which he appears to be aware of and which suggests itself as more likely existing in the invisible world of cyberspace than the three-dimensional reality around him. Michele Serra’s own generation, as parents, he says, have failed to provide their children with a sufficiently large or persuasive reason for existing–still less a model to follow–which adequately meets their desires. Hence, his son–and, by implication, all our children–is left alone to search for it in the ether.

It is a frightening and yet beautiful theory. If accurate, it points to a massive and growing deficiency in our educative processes and methodologies.

For me, personally, this fear persisted for several years now as my daughter edged into adolescence and beyond. Like many parents, I had a sense of having to fight the world for her, and yet having very little power to offset or overcome the influences she was being exposed to. Because our family circumstances are a little unusual, the situation was even more precarious and unpredictable. There were difficult moments; but, as time passed, things turned in a surprising way. Róisín is now almost 18. It is, of course, risky for a father to pronounce on the progress of a child of his before a definitive tangible outcome can be declared. But, still, it is astonishing what has been happening.

Firstly, Róisín is a thoroughly “modern” girl, who likes books and fashion and rock ‘n’ roll. And yet, she appears to have adopted an almost “Luddite” approach to the avalanche of technology which has infatuated most of her generation. She uses phones and computers, but only in ways that suit her broader ambitions and activities. She writes on a typewriter and has already had some stories published. She prefers listening to music on vinyl. She had a Facebook account but closed it down after a bullying episode. She reads and writes and has opinions on everything, but seems immune to the modern disease of “commenting” on everything for no apparent reason. It is as though she has considered the possibilities of the new technologies and rejected everything that does not serve her sense of what is real. It is amazing.

No Ceiling Above
I cannot say exactly why this has happened. I cannot take the credit, certainly not for anything I did intentionally or strategically. I don’t think it works like that. I think what is important is that a child grows with a sense that there is really no ceiling above her head that forces her gaze downwards or causes her to stoop as she walks along. Both Róisín’s mother and I, in our different ways, would, I believe, have communicated something like this to her: God made her for a reason and this reason will reveal itself in her life. When she was a child, she asked me, “So, Daddy, first there’s the sky, then outer space, and then Heaven. Right?” I said, “Right, love.” This, I think, is the most essential beginning.

Fatherhood is not understood in our societies. Motherhood we get: nurturing, cuddling, feeding, changing. When fatherhood is discussed as a method of parenting in the modern world, it tends to be depicted as a kind of male mothering. In as far as we allow for a different role for the father, we seem to think of him as some kind of supervisor/coach, rather than the one who provides the existential accompaniment to the child in the initial walk toward the horizon. For this coaching is what he does.

The best description I’ve seen of what fatherhood means was by the American poet Robert Bly in his beautiful foreword to Society Without the Father, a book by the German psychoanalyst Alexander Mitscherlich.
Bly said that the father had been destroyed–accidentally, he believed– by the Industrial Revolution, which removed him from the home and made his powers invisible to his children: “Industrial circumstances took the father to a place where his sons and daughters could no longer watch him minute by minute, or hour by hour, as he fumbled incompetently with hoes, bolts, saws, shed doors, plows, wagons. His incompetence left holes or gaps where the sons and daughters could do better.”

In the modern world, the culture– which is to say “the bunker”described by Pope Benedict XVI at the Bundestag two years ago–becomes the father, and teaches the child that there is nothing to know, nothing worth knowing, and nothing we do not already know, potentially. So, in the end, nobody knows what is to be known and everything is reduced to appearances. What space does the person inhabit? The width and height of a room? A car? A street? The infinite? What does this mean? Nobody knows anymore. The question no longer exists. How, then, can anyone hope to find the answer? What Bly describes was the child growing toward the infinite, like a flower or a tree, through the details of reality.

But if the father does not feel the infinite in himself, how can he infuse his child with an awareness of it? This is the problem Michele Serra has drawn our attention to.

"Fatherhood is not understood in our societies. It tends to be depicted as a kind of male mothering."

My Father's Van
I was lucky in that my father was much older than me and had his roots in a pre-industrial era. I “remember” now that he would teach me and my sisters things without appearing to be teaching anything. He would get us to help him– to hold a tool for him while he bled the brakes on his van, or we would clean the spark plugs in paraffin oil and hand them to him, one by one. I thought of these things as chores, but they were really lessons in the vitality of the particular. In this way, we were taught that reality is entered into through the particulars. In daily life, there is something mysterious that attracts us, but it cannot be found by a method of direct searching. It can only be glimpsed though immersion in a reality that has no boundaries.

This, I believe, is what Robert Bly was talking about. It is not that teenagers have lost their sense of mystery, but that their parents have lost the method by which to guide them toward the mystery, to indicate where it lies and reassure them that it is real.