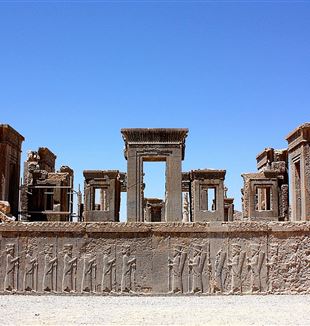 “The idols of the nations are silver and gold, /the work of human hands. / They have mouths but they cannot speak, / they have eyes but they cannot see...” For Professor Giorgio Buccellati, ever since the time of the psalmist, there was the bad habit of looking down on the inhabitants of Mesopotamia as if they were children. “It is a paternalistic attitude. We are not dealing here with stupid people, not at all. The Mesopotamians did not expect the gods to speak.” Buccellati is one of the most respected archeologists in the scientific community studying ancient civilizations. After studies in Milan, Innsbruck, New York, and Chicago, he now teaches History of the Ancient Near East at the University of California, Los Angeles. For over 40 years, he has been on digs in Iraq, Syria, and Turkey. He doesn’t have the physique of Indiana Jones, but he knows “his” Mesopotamians as if he had met them personally in the ancient city of Urkesh, in northeast Syria. He so submerges himself in the world vision of this civilization that arose in 3,000 BC in the plain that separates the Tigris and the Euphrates, as to be able to defend their reasons. In these past weeks, he is completing a book on the relationship between Mesopotamian and Biblical spirituality.

Professor Buccellati, what did you discover in Urkesh?
Urkesh was the capital of a Hurrite kingdom. The myth claims it to have been the dwelling of Kumarbi, the father of the gods. Today, it appears as a hill on a fertile plain of northeastern Syria. We found the remains of a monumental temple with a long stairway for access. It can be dated to 2,400 BC. It is presumably the temple of Kumarbi built by King Tish-atal. We know this thanks to the discovery of beautiful bronze lions, which were his royal symbol. The most fascinating place we found is a wide, deep trench in stone, alongside the royal palace. It was the place where the spirits of the after-life were called upon by a medium who was able to interpret their voices. It is a place striking both for its size and for the religious significance it witnesses.

Why did you feel the need to compare this type of religiosity with the biblical one?
In order to understand Mesopotamia better. To understand it better means to appreciate it more. When we speak of polytheism, we tend to be paternalistic, but this is a mistake. We consider it in a simplistic way, thinking that it is a bunch of bizarre myths that are hardly credible and not edifying.

Why is it a mistake?
There is a wealth in this polytheism that lies at the foundations of all subsequent development of religiosity, right up to our modern sensibility–and by “our” I mean ours as practicing Catholics.

I don’t follow you.
We are all bathed in this polytheistic mentality that has as its main characteristic the will to fragment the Absolute. The Mesopotamians interpret this “challenge,” from their point of view, in an astounding way, and a very effective one. To fragment the Absolute means on one hand to create gods, and on the other hand to delineate a situation in which the ultimate reality is foreseeable. To fragment means to be able to analyze, control, and distinguish.

Why do you say that this mentality reaches up to our own day?
The fragmentation of the Absolute is an attitude we also have today. We break it to pieces so as to control it. After all, this is the basic objective of all scientific research, and it’s what archaeology does, too. It controls the fragments. The more fragments there are, the better. Biblical sensitivity is different. The Absolute cannot be fragmented. Biblical tradition has the constant capacity to accept an Absolute that is not foreseeable. This has a series of corollaries.

What corollaries?
For example, that the God of the Bible is a living God. This doesn’t mean that the Mesopotamian gods were dead, but in the sense that God is unforeseeable; He is always surprising us. He is a God who acts. The Mesopotamian gods do not act; they are not persons. We speak of “anthropomorphism” of the gods, but it is the wrong word. I would speak of “icon.” Each of them represents a function. There is the god of justice, the god of wisdom, and so on.

The Bible says, “They have mouths but they cannot speak, they have eyes but they cannot see...”
But the Mesopotamians did not expect the gods to speak. There is almost never communication with the gods. The gods are only windows on the Absolute that are to be checked, and so the Absolute does not in fact speak–whereas Yahweh not only speaks, but creates. Creation is the fundamental topos of the biblical mentality. God creates and therefore always has the initiative in what happens. For the Mesopotamians, instead, creation does not exist. History is merely an ongoing evolution. There is no will that sets the world in action and keeps it there. The divinity is only Fate, Fate as the DNA, as the genetic matrix of the universe. What humans have to do, from the polytheistic point of view, is to understand all its rules. There is a passage in Stephen Hawking’s book, From the Big Bang to Black Holes, that has always struck me. He says that when we acquire a universal knowledge of things, we will understand the mind of God.

This is positivism...
Actually, it does not mean that we will understand the mind of God, but that we will be the mind of God. It is the myth of progress, which is not based on an agent that sets it in motion and that keeps it in motion. It is an amorphous reality to which we give form in the measure in which we understand and control it. The difference between Mesopotamian religiosity and biblical religiosity is the same as that between explanation and faith–not so much between reason and faith, since there is no real contrast between these, but between explanation and faith. What is commonly defined as “reason” is in actual fact a capacity to explain. We explain things by fragmenting them and then putting the pieces in relationship with each other. What faith does, instead, is to assume that the Absolute has a capacity for initiative which calls us to respond.

So it is an alternative that is valid even today?
These two ways of conceiving the Absolute are the only ways possible. Tertium non datur. There are no other religions. There are only polytheism and monotheism. Even atheism and Buddhism, which seem to not consider a divine reality, see the Absolute as a reality that conditions us and that we can control. The other dimension comes only with the Bible, which is passed on unchanged to Christianity and is then received by Islam. The structural difference between Mesopotamia and the Bible is a paradigm for the history of religions.

Earlier, you said that polytheism is a risk that we Catholics also run. Why?
We are all immersed in this way of thinking. We are all polytheists. In substance, though in a rather paradoxical way, polytheism is the original sin, so it is in all of us. We, too, at times, tend to conceive Providence as a way of organizing things well. It is difficult to abandon oneself to the will of God, because we prefer always to keep control of things ourselves. The foreseeable nature of things is fundamental today as it was then, whereas biblical prophecy and the way in which God will keep His promises to the people of Israel are absolutely unforeseeable. And this is perhaps the great drama of the figure of Jesus. The Hebrews were at the same time prepared and unprepared to welcome Him. They were waiting for Him, but were expecting a completely different Messiah. Accepting Him as He presented Himself was a huge trauma.

A trauma?
Yes. Just think of Our Lady. Mary had this child, but had no idea of the future that awaited Him. She was promised a glorious future, but for 30 years nothing happened. Then Jesus was killed on the Cross. This is quite out of line with the Davidic tradition of the great kings. It was something quite unforeseeable, something uncontrollable. Mary’s extraordinary personality lies precisely in this. She was never given any particular explanation of what was happening, yet she always accepted it fully. During Jesus’ life she never became the Queen-Mother of the Messiah-King. Then, when the Church was born, she vanishes; though she had to be present in various ways, it was never a solemn presence. She has the same importance as the great prophetic figures of the Bible, ready to accept a will that is not explained, that cannot be explained, but which gives things their meaning.

Exceptional things happened to Mary, too, though.
Certainly, but apart from the infancy narratives in the Gospels–I am thinking of the Shepherds and the Magi–there is really nothing of a solemn nature. What is astounding is that Mary and Joseph accept their circumstances while remaining completely in the dark. Imagine this girl who finds herself with a child, she who had never known a man. Imagine how dramatically it must have marked her life and that of her husband. But the biblical mentality had prepared them, not in the theological sense, but in the sense of acceptance of God’s action. God’s unforeseeable nature expressed itself firstly with the creation. The creation is the first explosion, followed by the second great explosion that is the Incarnation of Jesus. Mary and Joseph are the witnesses of this new Big Bang. But apart from the virginal conception there is nothing else supporting it. Looking at the contrast between this position and that of the Mesopotamian peoples helps us to understand our situation on the existential plane, our human position as believers.