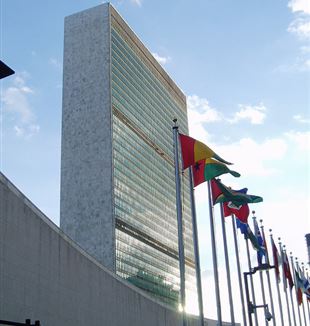 May 19th, New York. The sky is cloudy. I arrive at the United Nations and Joseph Weiler is waiting for me, seated on the wall surrounding the building where we will have the presentation.

The Glass Palace is being renovated, and the meeting hall they have assigned us is not in great shape. Wael Farouq is on his way—I just left him at the hotel.

When I arrive, my friends from America are all there–Chris, Simonetta, Angelo, Teresina, Riro... For me, they are "all," because they are "us" and at that moment it is even clearer to me why I am there and everything appears immensely glorious.

The Italian Ambassador, Antonio Bernardini, makes the introduction, speaking of the Meeting as something directly connected to the United Nations. He speaks of curiosity, of dialogue, of friendship. When John Paul II addressed the UN in 1995, he extended the invitation to build the "civilization of love," exactly as he had said to us at the Meeting in 1982: "Build the civilization of the truth and of love." On that same occasion, he said, "We must not be afraid of man." In re-reading the Pope's speech, these similarities in tone struck me, and giving credit to man's heart and this passion to build were what I wished to communicate.

Before beginning my talk, I pray that the audience "become aware" of a different and possible humanity, that they become aware that Christ makes life better, that He makes us curious and passionate about reality, that Christianity is not a moral system (as it is often seen in that environment) nor an ideology. I simply speak about us, about the encounter with Luigi Giussani, about how the Meeting came to be, about our friendship, about what happened to us over these 32 years, about the people we have met.

Our great friends, Joseph Weiler, the Jewish legal expert, and Wael Farouq, the Muslim professor, are the living testimony of what the Meeting is. Weiler defines it as "a human experience, the realization on a personal level of the most profound ideals of the United Nations." Farouq speaks about the Cairo Meeting, the fruit of the encounter with the Rimini Meeting: "After the attacks on the church in Alexandria, we took up the weapons of beauty in the face of violence. When the revolution began we were in the front lines."

Today, Wael and the other friends are together facing with seriousness the issues of the transition in their country. Weiler and Farouq are the proof of what it means to be shaken by a human encounter, shaken by the "spirit of Giussani," as they say.

Present at this meeting are about twenty delegates; the Nunzio, Bishop Francis Chullikatt; the press; and so many friends of Crossroads. I don't know how many became aware of "something," as I desired. Certainly Simonetta's boss did. That very day, he had lost his sister. At the end, he went home, saying, "I needed to be here." The charism of Luigi Giussani, the Glory of Jesus and His victory, through us, became present there, at the UN. And while I spoke, I experienced the certainty that, even in that place, nothing was more appropriate and reasonable to propose than what we, through Grace, have been given to live.

*President of the Meeting of Rimini Foundation