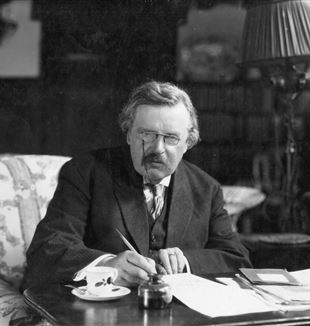 G.K. Chesterton is one of English literature's most beloved figures and Father Brown is his most enduring creation. The two men had a lot in common–wisdom, innocence, simplicity, a love of the ordinary, insight into the nature of things. The little Norfolk priest, says Dale Ahlquist, "has been charming and surprising readers for generations" and there is every reason to imagine he will continue to do so for decades to come. With his strange serenity, his worldliness and unworldliness, his unsettling ability to appear almost anywhere just as a corpse is coming into view, he is a detective's detective and a priest's priest. As for Chesterton, his reputation strengthens by the year, so that, in the words of Ian Ker, his latest biographer, he ranks alongside the "great Victorian prose writers"–Matthew Arnold, Thomas Carlyle, John Henry Newman–in power of language and depth of moral intelligence. He was, in every sense, a colossal figure–a journalist, playwright, poet, novelist, and philosopher. Aurel Kolnai, the Hungarian philosopher, called him "a Fleet Street Aquinas, a public house phenomenologist." Etienne Gilson thought him "one of the deepest thinkers who ever lived." Hilaire Belloc referred to him simply as "my Chesterton"–a comrade-in-arms, a fellow Catholic, a friend. Many of us feel the same way about him.

Born in 1874 and dying in 1936, Chesterton lived a life spanning Britain's Victorian high summer and its Edwardian and Georgian decline. He was in some ways the uniquely articulate voice of those years of change, expressing the unsettlement of England as villages gave way to towns, as faith gave way to reason (a piece of bad theology, Father Brown would have said), as church gave way to state, as men gave way (a little) to women, as the old gave way to the new. One way of reading Chesterton is to see him as an unusually perceptive critic of these traumas of modernity, chronicling the losses, as well as the gains, of the encroaching Age of the Masses.

AT THE ROOT OF THINGS. Yet he was not a Tory traditionalist or (as some have claimed) a reactionary. His chief characteristic was a kind of metaphysical radicalism, a startling ability to get to the root of things. Unlike contemporaries such as W.B. Yeats, D.H. Lawrence, H.G. Wells, and Virginia Woolf, according to John Carey he "was a democrat… He did not hate the masses or despise suburbia or admire Nietzsche or advocate eugenics or deliberately write books that no-one could understand… Far from sharing the usual highbrow contempt for newspapers, he was a journalist all his life and published some 4,000 articles in the course of 30 years." He was up-to-date also, with his cape and pince-nez, self-consciously old-fashioned: a walking contradiction, a paradox personified. To the Catholic Church he gave thanks for saving him from being a child of his own time. But that Church, like Chesterton, was also of the here-and-now, the Incarnate Christ made present in mystical and sacramental ways. Chesterton expressed some of that doubleness in his own life–a man of his own day and a man who stood outside it. He was also a memory-keeper of the deep and hidden country of his own birth. "To follow Chesterton's mind and its expression is an introduction to the English soul," said Belloc. "He is the mirror of England." Or, as Chesterton himself put it: "Smile at us, pay us, pass us; but do not quite forget;/For we are the people of England that never have spoken yet."

This "People's Gilbert"–the advocate of the working-man, the commuter's companion on a thousand journeys from Clapham to Victoria, the defender of the poor–is a compelling and attractive figure. When Chesterton died, he was mourned by many as the friend they never met, as the man who had known something of their lives and added a share of joy to them. "Hesketh Pearson was staying with me when I read of Chesterton's death," recorded the author Hugh Kingsmill. "I told him of it… and he sent up a hollow groan which must have echoed that morning all over England."

Fr. Brown, too, has given enormous pleasure over the years. Like Chesterton, he has that odd ability (often associated with children and mystics) to see the strangeness of familiar things and, seeing it, to solve a crime or make a moral point or remind us of the startling strangeness of creation itself. Like Chesterton, he seems to know us better than we know ourselves, using that insight to explain the otherwise inexplicable. His combination of cleverness and wisdom is its own form of metaphysical radicalism. "The Fr. Brown stories," writes P.D. James, who should know, "are among the finest crime stories ever written." "Father Brown," says Kingsley Amis, "is one of the greatest of all great detective figures… His field of knowledge is human nature, and his skills are observation, reason, and common sense." What Monsignor Ronald Knox demanded of the detective story–"not sensations or horrors but ingenuity"–is here in abundance.

What really contents us [Knox writes] is when we see at last, and kick ourselves for not having seen before, that the man who was murdered in the Turkish bath without any trace of a weapon was stabbed with an icicle; that the poisoner did drink the tea which accounted for her victim but took a stiff emetic immediately afterwards; that the time of a particular incident was given wrongly not because the witness was in bad faith but because she saw not the clock but the reflection of the clock in a looking glass.

That is why the stories, as beautifully crafted puzzles, work so well. They seem to defy reason only to confirm it; to withhold explanation and then, with a flourish, to supply it. There is a solution. The senseless does make sense. But the stories are not puzzles. They are, in a deeper sense, mysteries. The world of reason and explanation is unsettled, then restored, but it is given back to us somehow stranger and more puzzling than before–as if its very existence is a kind of brilliant surprise.

THE SUPREME ADVENTURE. Chesterton once said that the task of the philosopher is to be at once at home in the world and utterly astonished by it. The supreme adventure, he said, is the adventure of being born. In these wonderfully inventive tales we are forced to look at the familiar with unfamiliar eyes and, that way, to see it as if for the very first time. The whole world, Chesterton seems to say, is a sight for sore eyes. We must begin to look at it properly. At the end of one of the very last stories, The Insoluble Problem, Fr. Brown finds himself in a monastery, having solved the problem and having rescued the cross of Saint Dorothy.

He raised his eyes and saw through the veil of incense smoke and of twinkling light that Benediction was drawing to its end while the procession waited. The sense of accumulated riches of time and tradition pressed past him like a crowd moving in rank and rank, through unending centuries; and high above them all, like a garland of unfading flames, like the sun of our mortal midnight, the great monstrance blazed against the darkness of the vaulted shadows, as it blazed against the black enigma of the universe. For some are convinced that this enigma also is an insoluble problem. And others have equal certitude that it has but one solution.