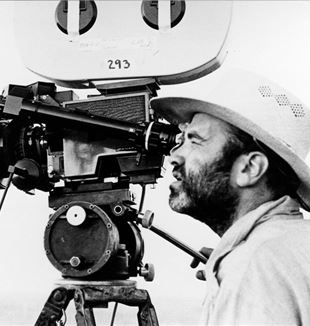 We can file away Kubrick and his sublime Space Odyssey, vertiginous but finite. File away Bergman, all those questions that don't expect an answer. File away the angels of Wenders, forced to choose between a world of colors and a gray, empty sky. In the Year of Grace 2011, cinema starts again with Terrence Malick and his The Tree of Life, a film that dares to do what only Andrei Tarkovsky has risked to date: a direct dialogue between earth and heaven, between man and God, between sign and meaning. Malick–the most retiring American director in history, a man of whom only one photo circulates on the entire web, who has made five films in 40 years while he translates Heidegger–won the highest award from the Cannes Festival, the most secular festival in the world, with a film that is a miracle: audacious, in your face, free even to the point of risking the ridiculous in every take. It is a film that has drawn unto itself all the love and all the hate of the world. To give just two examples from Italy, it is a film that "Hitler would have liked," according to a film critic, and it is a work where, according to the daily Avvenire, there is "the incommensurably distant God of the American plains," and Christ is missing. In order to understand who and what we have before us, let's start with the Italian Channel 1 interview of Roberto Benigni, a man with a burning heart and truthful moods, who comments just after viewing it: "Seeing a film like this changes you; everyone becomes more beautiful…." Again, "It's like finding yourself in an eternal symphony. It's like as if Michelangelo had just finished, now, the Sistine Chapel, and he said, 'You want to come see?' But done now, fresh! You open the door and you find yourself in front of the greatness, the history of the world, your personal story: from a spoon to the birth of the planets, to what the world is, to beauty. You don't have to move; you're in the Sistine Chapel and everything moves around you and you're part of it." And his closing invitation: "Go see this film, The Tree of Life, directed by Michelangelo Buonarroti. Thank you, Michelangelo." There's only one warning to add: there's no antidote to this film. Handle with care.

JOURNEY OF THE SOUL. Malick's journey started ten years ago, an infinity for the world of films but not for love. Just think of Gaudí. Malick erected his cathedral in real time, the time necessary for his protagonist, the boy Jack, to grow up and wear the handsome and surly face of Sean Penn, who, in the meantime, has traveled. From the small town of Smithville, Texas, where he spent his childhood in the front yard dominated by the big tree that provides the title of the film, he has resettled in the city of Houston, cold and ultramodern in the blinding splendor of the glass and steel buildings that challenge the sky. Jack is homo viator, as suggested by the Moldau symphony that accompanies his journey of the soul. A man of suffering, as in the epigraph from the book of Job that opens the film: "Where were you when I laid the foundations of the earth?" "A soul lost in the modern world," says Malick, and it is the only description of his character that he gives us. The rest is provided by the voice-over that, as in the director's previous films (Badlands, Days of Heaven, The Thin Red Line, and The New World) counterpoints the images, creating the distance that allows you to judge: "How did I lose you? I went away. I forgot you."

There is pain in the life of Jack, a sense of loss marked by the tolling of bells that is mixed, in this soundtrack by Alexandre Desplat (The King's Speech), with the requiems of Tavenar, Preisner, and Berlioz: a brother who dies at the age of 19, and a very tender love for his mother (Jessica Chastain), always struggling, in her heart, with the tyranny of her husband (an amazing Brad Pitt, also co-producer), slave of an aggressive and sterile rigor that reminds one of the great, desperate men of Dreyer. Like Job, like his father and mother, Jack demands from God an explanation for this pain: "Who are we for You?" And God answers, through a dizzying journey that starts in the present and goes backwards, before space and time, to recount the formation of the universe, the birth of the Earth, the creation of life, the great disorder that makes way for a new order, perfect and moving. God answers with the music of Bach and the singing of the Agnus Dei, with images that tell how Grace broke into history, even before history began, of a powerful and recognizable presence that, from the fabulous millennia inhabited by the dinosaurs, reaches today to touch us, all-too-human humans, under the form of a cross and forgiveness. A river of images, of sounds and flashes, of profound silences that speak in a mysteriously believable language, a painting that owes much to the magic of the pioneer Douglas Trumbull (2001: A Space Odyssey), capable of mixing watercolor effects with digital technology to produce that "beauty that captures heart and reason."

A QUESTION THAT CHANGES. There will still be doors to open, tears to shed, the life of a son and of a brother to offer, before the eyes of the O'Brien family are opened to the splendor of the new heaven and new earth. But in the meantime, the question has changed to supplication: "Protect us. Guide us to the end of time." Great technique? Absolutely. But all technique points to metaphysics, as we have been taught by Hitchcock and Godard. There is not one chance shot in Malick's film, which also owes much to the journeys of Rossellini. That camera, held on the shoulder, that rises to capture the faces and, beyond them, the trees, and further beyond, the sky–it knows well where it comes from and where it is going. This is what the film is about: the line that connects our daily life, made of details and wounds, with the meaning of life and of the universe. It deals with destiny, with the race to the knowledge of truth, and with Grace that frees us from evil. "Art needs people who are moved, not people who are reverent." So then, let's not be ashamed of crying at the end of the film. Let's bring this scandal with us, beyond the screen, outside the movie theater.