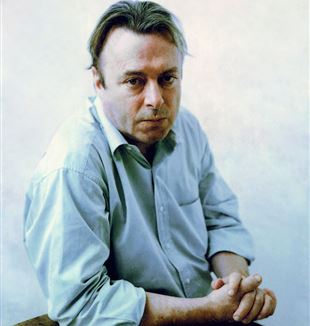 Almost two years ago, I was invited to participate in a public discussion about the “new atheism” and its determination to remove from the shaping of public policy any influence of religion. This “new atheism” is not a philosophical argument against the existence of God. It is an aggressive political cause, the implementation of a militant secularist ideology. The meeting was to take place at a swank Manhattan hotel during a fancy lunch, moderated by very well known media figures. It seemed interesting, so I agreed to participate in what I thought would be a panel discussion.

A few days before the event, however, I found out that, to my horror, it was not to be a panel discussion. The representative of the world of religion and faith was just me! And arguing on the side of militant secularism was none other than the formidable Christopher Hitchens! Apparently, the organizers had invited others to defend religion from the attack of Hitchens, but they had refused, knowing full well that he was a master debater in this kind of spectacle. I only had a few days to prepare myself for the encounter, so I began to read transcripts of past similar discussions. They were as bad as I had expected, and Hitchens was as good as I feared. But there was something more that I had not expected: given the way the debates were framed, I found myself in agreement with Hitchens most of the time. I had the same reaction recently reading about Hitchens’ new memoir, Hitch-22, published recently.

David Brooks, the “in-house conservative” columnist for The New York Times, wrote an interesting piece on Hitchens and his new book (July 2, 2010), noting that “there are few people in this country who bring such a literary perspective to political and policy controversies.” Well, for Hitchens, issues of religion and faith are political and policy issues indeed. Brooks describes Hitchens’ childhood experiences and the tremendous influence they have had on his way of thinking (and style of arguing, I might add). As far as his ideas concerning matters of religion and faith, this is what Brooks writes: “His literary perspective seems to have organized his energies. In ideological terms, his interests are all over the map…”

“His literary perspective seems to have contributed to his adventurousness, his delight in the one-man (if necessary) cavalry charge. Ayatollah Khomeini’s fatwa against Rushdie ‘completely committed me,’ [Hitchens] writes. ‘It was, if I can phrase it like this, a matter of everything I hated versus everything I loved.’ Dictatorship, religion, and censorship against literature, irony, and free expression. There were no shadings; he judged everybody by whether they passed this test of moral courage.”

When our encounter finally took place, I refused to play the game. Again and again I repeated that in terms of Hitchens’ experiences of religion and faith I found myself in agreement with him most of the time. At one point, Hitchens was clearly upset. “I thought I had come to debate a religious believer, but he sounds more like the atheist than I do,” he said, or something like that.

Many in the audience expecting me to bite Hitchens’ bait were disappointed that I had “wimped out,” while many of his supporters were disappointed that they could not enjoy his masterful debating tactics. Since then, I have had two regrets. First, I regret I did not refer to a literary work that would have responded to his atheistic interpretation of his experiences. I have in mind James Baldwin’s play Blues for Mister Charlie, to which Msgr. Luigi Giussani refers in his book The Religious Sense. In particular, Giussani cites a conversation between the character Richard and his grandmother. She makes a reference to the importance of faith in her life. Richard comments, “You know I don’t believe in God, Grandmama.” She replies, “You don’t know what you are talking about. Ain’t no way possible for you not to believe in God. It ain’t up to you.” Richard asks, “Who’s it up to then?” She replies, “It is up to the life in you–the life in you. That knows where it comes from, that believes in God.” I saw in Hitchens the that of which Baldwin wrote, and I wanted very much to talk with him personally, away from the public spectacle, about this desire of the heart to which it points. My second regret is that I have done nothing to explore this possibility.

Now Hitchens has announced that he was diagnosed with cancer in the esophagus, and I don’t want to appear in any way to take advantage of something like this to try to see if he would be interested in such an encounter. I hope that he gets well soon, and that someday we can have a Crossroads Cultural Center event on Baldwin’s that in which he would be willing to participate.