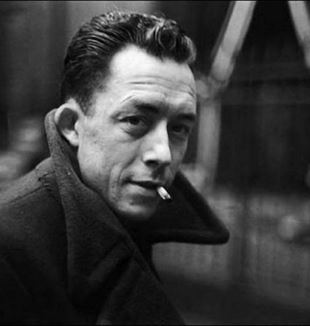 I was undecided which of two sentences from Albert Camus’ Notebooks to use to begin this article marking the fiftieth anniversary of the premature and sudden death of the great writer, on January 4, 1960, in a car accident.In the end, I decided to use both, and readers will understand why.The first is from 1951: “Beginning to give yourself means condemning yourself to never giving enough even when you give everything. And you never give everything.” The second is from a few years later: “The literature of totalitarian countries dies not so much because of the fact of following an obligatory road, but because it is separated from the other literatures. An artist prevented from opening himself to all of reality is mutilated.”

These two sentences suffice to define the irreplaceable importance of Albert Camus, not only in twentieth-century literature, but in all of literature.
Camus was one of the artists–not many, but not few either, fortunately–who in the most nihilistic and tragic century of all of history, in the century in which man was often considered less than nothing (and in this, executioners and intellectuals were often in agreement), most fiercely opposed this tendency. Their opposition was not in the name of a religion they weren’t able to know adequately, much less in the name of ideologies, but in the name of human experience. We could say without fear of misappropriating the term, that it was in the name of elementary experience. This is l’homme révolté, man “in revolt,” of the homonymous essay.

With the simplicity only the great can command, those two sentences express the dual law of life. First of all, in fact, for Camus (as for us), a man is not fully a man if he fails to open himself to “the whole of reality.” This is our true vocation, the true nature of reason: “An artist [or, in other words, a man] prevented from opening himself to all of reality is mutilated.”

We’ve always said this, but perhaps we’ve sometimes repeated it without making it our own, without awareness of its consequences: and here a non-believer repeats it for us with the power of simplicity. In a century in which reason was used to count, divide, group, calculate, and measure, in a century in which reason was the abstract instrument of a bookkeeping and a bureaucracy of the soul that lead to extermination, Albert Camus, in his deepening and undesired intellectual solitude, affirmed that reason is something else. But a second element emerges from the two sentences quoted above: the fact that man is incapable of this totality, that he can’t rise to the heights of his own vocation. This is called original sin, something of which not all are aware: one must have sought to climb very high, or must have had a great chance, good fortune, as Camus said, to touch this limitation.

If you don’t try to go all the way, you won’t even understand your limitation. The greatest crime for Camus wasn’t Auschwitz or Hiroshima, but this early mutilation of the possibility of experiencing our desire and our limitation.
This would be enough to enable us to say with certainty that there is no way of thinking of twentieth-century literature without facing the figure of Albert Camus.

Camus belonged to a generation of writers that couldn’t express itself in great works like the preceding generation. Comparing the works produced in the 1910s, 1920s, and 1930s (Kafka, Joyce, Mann, Proust, Musil, Hemingway, up to Faulkner, the last progeny of that era) and those of the younger authors, born in the heart of the twentieth century, from Pavese to Camus to Saul Bellow, we can’t help but observe a fracture, a radical diversity that reaches the heart of the form.

It’s as if human freedom were reduced and man were becoming used to this reduction. The older writers, even though they radically modified the structure, still believed in the novel as they’d inherited it from the nineteenth century. Joyce is an experimental author, but not, I believe, like Honoré de Balzac, or even like Alessandro Manzoni.

A searing reflection on man.
For Camus’ generation, there was no time for the novel; there was no time for beautiful love stories or the great historical epics (which often hide tons of ideology). Literature was at the service of a searing reflection on man and his destiny, on man in his nakedness, de-contextualized, uprooted. In the era of totalitarianism–which is not at all finished–man appeared without roots, because history itself, the power that makes history, wanted nothing to do with roots; it bans Christian roots today because they are human roots.

Albert Camus, born in 1913 in Mondovi, Algeria, always kept Africa as the place of his roots, as his native shore, the keeper of his origin, of his highly complicated homeland, France. Africa was his rive gauche.

Africa is the setting for his most famous novels, The Stranger and The Plague. The Stranger is perhaps Camus’ literary masterpiece. The opening is among the most famous of twentieth-century literature, “Mother died today. Or maybe yesterday, I don’t know,” and from this opening flows, through an act of absolute obedience, the entire story of Mersault, a man whose mother dies, who after the funeral begins a loveless relationship with a woman, and who kills an Arab, is condemned to death, refuses the visit of a priest and at the trial does not defend himself, submitting in the end to the death sentence. Mersault is something absolutely new in literature. Never had a character like him appeared on the scene. His indifference has nothing in common with that of Moravia, which involves the boredom of the rich bourgeois who have everything and no longer feel passions. His indifference is radical: Mersault exits from history, which he suddenly feels as extraneous, and his life transforms into a series of instants detached from each other, acts that are born of nothing and lead to nothing.
The reason for this exit is well illustrated in the essay Charles Moeller dedicated to Camus in Modern Literature and Christianity [part of Fr. Giussani’s series with Rizzoli-Bur] that links the story of Mersault to the search for a state of pure innocence.

The actions of Mersault are pure actions. His homicide is light; Mersault feels no guilt. The blood shed seems to have nothing to do with him. All this is absurd, but the absurd, Camus seems to be saying, has become the only road, the only one, even if it is impossible, by which twentieth-century man, coeval with all the horrors, can try to recover the sense of his own birth.

To the same period belongs his most famous play, Caligula, which develops a similar theme: the more the protagonist realizes that man is made for the infinite, the more he comprehends that obtaining this is impossible, and therefore he goes mad. In one of the first versions of the piece, which was re-worked many times, appears the famous expression so dear to us: “Be realistic. Demand the impossible.” The Plague is a great metaphor for war and the madness that has infected men and nations. In the Algerian city of Orano, a plague is slowly spreading, one that in the end will exterminate most of the population. A few men battle it, responding to the apparently endless pain with the tenacity of their concrete solidarity. Rereading this great book today, one is struck by Camus’ strenuous opposition to all ideology. The solidarity he proposes is solid, not born of theory, but only from the reality of the need that obligates men that can do so to respond not out of a sense of duty, but out of the need to deal with their own humanity.

Camus wrote many texts that could be classified as “philosophical essays,” among them The Myth of Sisyphus and Man in Revolt. And yet, even though today the importance of these works is unanimously acknowledged, in his lifetime, Camus’ work was forgotten because of his non-adherence to the invitation Jean-Paul Sartre–the most famous French intellectual–addressed to the culture of his country. For Sartre, intellectuals could no longer consider themselves outside current events and politics; they had to engager, engage themselves with the day’s burning issues, not fail to raise their voices against injustice, let their indignation be heard: Auschwitz and Hiroshima must never be allowed to happen again.

This invitation coincided with Sartre’s (temporary) membership in the Communist Party, which Camus had belonged to some time before, and above all with his adoption of Communist ideology and Marxist analysis as instruments of that commitment. In hindsight, it was a great operation of power, born on the wave of the fascination of Soviet propaganda and then pursued on its own strength until, one could say, our own time. Even today, the intellectual is almost by definition leftist. And the many massacres, from Cambodia to Srebrenica, demonstrate that it was, above all, as said, a question of power and of caste.

The first phone call.
Camus didn’t need hindsight. He understood the deception immediately, also because one of the first battles fought by this new French intellectual class was the revolt against the Algerian colony, which at that time rebelled against French domination. Sartre and his companions openly sided for the insurgents, while Camus dissociated himself, saying that no cause, no matter how just, could ever set him against his mother. Camus paid dearly for his position, so much so that not even the surprise award of the 1957 Nobel Prize (and this was perhaps the last act of true courage of the Swedish Academy) could break the pall of silence around him. At the news of the Nobel, the first person Camus phoned was his old elementary school teacher, a fact that speaks volumes about the man and the intellectual.

In one of his last works, The Fall, Camus expressed a new, brilliant synthesis of his own humanism. In this book, in a bar in Amsterdam, a lawyer named Jean-Baptiste Clamence tells a chance acquaintance about the failure of his life and the episode that determined it.

One night in Paris, crossing the Seine, Clamence notes a figure on the edge of the bridge parapet. It’s a girl, who, hearing him pass, turns, showing him a completely desperate face. Clamence is tempted to say something to her, but then timidity, the fear of appearing ambiguous, a misunderstood sense of discretion induce him to continue without saying anything. After some time, when by now the girl is far behind, in the still of the night Clamence hears a scream followed by a splash: for whatever unknown unbearable pain, that girl threw herself into the river, and it was too late to save her.
This is the point of departure for his reflection. How can a man adhere to ideology, thinking that through it he can do justice? The only justice, the only impossible justice for the lawyer Clamence would be to be able to go back in time to that moment and see the girl again facing the dark river, and speak to her, try to save her. This impossible miracle is what is called forgiveness, nothing less. This is true justice. Here we are. For me, Albert Camus means this: an indomitable openness to all of reality, a revolt against all–ideology at the top of the list–that reduces his horizon (what Fr. Giussani called the “dimension” of a human gesture), the need for concrete solidarity among men and an inexhaustible need for forgiveness.