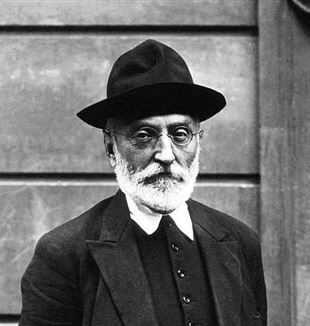 Miguel de Unamuno y Jugo was born in Bilbao in 1864 and died in 1936 in Salamanca, where he was a Professor of Classics and intermittent “rector for life.” A fervent Catholic in his youth, his studies brought him to believe that he could not reconcile religious belief with reason, and he never fully returned to the Church. Known primarily as a philosopher, Unamuno believed philosophy to be closer to poetry than to science. While his thought exhibits real limitations, there are features of his controversial but dynamic ideas that describe the reductions we witness in our culture today.  Unamuno wrote in many genres: poetry, theater, novels, essays, articles, and philosophical treatises. Many of Unamuno’s central positions are laid out in The Tragic Sense of Life in Men and Nations (1912)* and, despite its limitations, the passion of Unamuno’s entreaty and the genuineness of his search for truth deserve a second look.

Because Unamuno’s thought is complex and often paradoxical (and, at times, truly inconsistent or undisciplined), it might be difficult to follow his arguments. Unamuno shared Msgr. Giussani’s love for Giacomo Leopardi ’s poetry, and much of Unamuno’s writing attests to the same religious sense so evident in Leopardi and the later existentialist authors that Giussani often quoted. Here, I will address several of the focal points of The Tragic Sense that I believe are worthy of our attention.

The sense of life.  In the first chapter of The Tragic Sense, Unamuno lays out the problem of man and philosophy. Man is made of flesh and blood, and we cannot reduce him to philosophical abstractions or to a mere talking head. Man is a human being who lives and dies–and herein lies the essence of the problem. For I am attached to my own “I” and I want my consciousness to endure in time–I naturally seek a meaning beyond myself. Central to the “tragic sense” that Unamuno speaks of is the problem of reconciling my desire for personal meaning with my intellectual need for truth. He is also acutely aware of the increasing social and intellectual censure of asking the vital questions of life.

Reason and faith . A large portion of Unamuno’s thinking is focused on the need man has for faith and the centrality of faith as the only truly adequate answer to his needs. This is troubled by the fact that, for Unamuno, faith is completely irrational and thus unacceptable to his reasoning. Much of the poetic beauty of Unamuno’s work lies in the struggle that he engages in between faith and reason. His limited (scientifically rational) view of reason makes him unable to reconcile faith with reason, but he refuses to give up the fight. He comes back to this theme, again and again, with a tenacity that indicates a desire and points to a focus outside himself which, tragically, he never fully embraces. While Unamuno cannot see reason beyond the scientific sphere, he fully recognizes the limitations of scientific viewpoints and the need to see the human subject against a broader horizon in order to see man’s meaning and dignity at all.

The significance of tradition.  Unamuno is very clear-sighted in recognizing, with an uncommon lucidity, that his culture depends on Christianity. In a time when many seek to build on values that would never exist without the tradition of the Church, his writings are a clear antidote to the misconception that history did not change the European understanding of the human person and his value, and they recognize the consequences of removing that reference point.

The centrality of fatherhood . While Unamuno does not address his own fatherhood in The Tragic Sense, it is an important backdrop for his work and life. Unamuno’s third child was born with an incurable disease and died at a young age. Unamuno was driven to desperation by this event and his inability to make sense of the tragedy. In his grief, he was cared for by his devoted wife and the monks of a monastery in Salamanca. He thereby came to know–in his own personal experience–that there was an answer to his questions, even if it was one that he could not truly comprehend. The real possibility of an answer is one that he reaches out to, despite never fully embracing it.