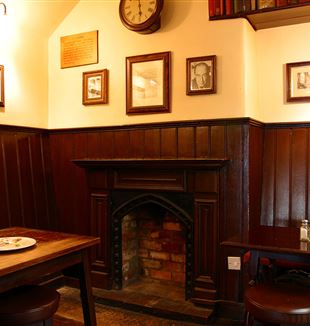 Four friends around a pitcher of beer. Perhaps this is not how we would imagine one of the most famous literary clubs of England in the 20th century. And yet, it was in front of a beer–specifically, in Oxford’s Eagle and Child Pub–that some of the most beautiful books of the last century came to light, written by those four friends who jokingly called themselves the Inklings, a word that gives the idea of ink and those who use it, as well as hinting at their desire to get at clues to the truth of things. If there was one virtue that Clives Staples Lewis (called Jack by those who knew him well) possessed in abundance, it was the ability to surround himself with friends with whom he could discuss, often very animatedly, literature, philosophy, morality, and religion, as well as read the first chapters of the works each was writing. This was how some of the best known of Lewis’s works were born–The Chronicles of Narnia and the so-called Space Trilogy, as well as his great friend’s masterwork, The Lord of the Rings.

The Papist-Philologist friend
Among these friends, a special place was held by J.R.R. Tolkien, who Lewis met when he began teaching at Oxford, and who played a large part in his conversion. “When I arrived in this world, they (tacitly) warned me to never trust a papist, and upon my arrival in the English faculty, they (openly) warned me never to trust a philologist. Tolkien was both.” And yet the stubborn papist philologist with a fixation for languages and the Irishman who loved Nordic myths and medieval allegories in some way felt an affinity for each other, even though at the time Lewis was theoretically still very far from the faith. In one of his most beautiful works, The Four Loves, Lewis wrote pages of extraordinary depth on friendship, as a commonality between two people who do not look at each other, but together “look at the same thing,” and elsewhere he wrote that there is nothing more beautiful in the world than the gathering of a group of Christian friends. Undoubtedly, Lewis had experienced this beauty personally.

Born into a practicing Anglican family, Lewis had begun to distance himself from Christianity after his mother’s death, when, as was normal for those times, he was sent to a public boarding school, an experience he would always recall as awful. His journey toward atheism also continued under the influence of the teacher of his youth, W.T. Kirkpatrick, a practicing atheist and elegant dialectician. Having attained a position that he felt was clear and unassailable, the young C.S. Lewis, a brilliant scholar and rationalist, could well feel satisfied about his intellectual vision and his promising career at Oxford.

Prodigal Son
The problem, as Lewis jokingly admitted in his autobiography, Surprised by Joy, is that the Lord is not an easy adversary, and loves to lay out his “hooks” where one least expects it. So, in the Nordic legends that Lewis so loved, he began to experience a strange sensation, one he called “joy,” a sentiment of nostalgia and beauty that only the most fascinating things can evoke, and that inevitably lead to an Other, an Infinite that is always elusive, yet real. Only many years later did Lewis understand that this precious experience was the call by which God was drawing His “prodigal son” to Himself. Thus, ever so slowly, and almost grudgingly, the professor found that he had to acknowledge the existence of the God he had rejected in his youth. True, there was the problem of Christians who, as Roland said in the Chanson, “were wrong, but all the others were boring,” and of someone like Chesterton who, as Lewis admitted, was “the most reasonable of living beings… notwithstanding his Christianity.” In the end, his nighttime conversations with Tolkien and another Oxford colleague, Hugo Dyson, were what made Lewis finally capitulate: Christianity was not only philosophically reasonable, but it possessed all the beauty of a myth that God freely had made true.

The Devil’s Letters
After his conversion, Lewis put his brilliant dialectics to the service of the faith, giving talks on the radio and traveling England to speak and discuss with people about his experience as a Christian, as well as about miracles, the problem of suffering, and the relationship with contemporary culture. His books of “apologetics” issued from these efforts, and the concreteness of these works is the best proof that all the doubts and uncertainties dealt with, all the experiences described, Lewis had lived personally during the years when, like Jacob, he was still wrestling with God. This strong reference to experience is found in what may be his most famous work, The Screwtape Letters, a series of missives supposedly written by a very experienced arch demon to his nephew, soon to embark upon his first job. The book’s pungent irony unmasks all the hypocrisy with which the modern world hides the simple concept of sin.

Works of Narrative
The inexhaustible imagination of Lewis, fed by his very extensive reading, flowed out in works of fantasy as well. Long before the arrival of Harry Potter, his Chronicles of Narnia (seven books, the first of which, The Lion, the Witch, and the Wardrobe, has been made into a film to be released this Christmas) were the most-read children’s books of all time in the Anglo-Saxon world. The imaginary land of Narnia, unexpectedly reached through the door of a large wardrobe, is not only the background for extraordinary adventures with talking animals, witches, fauns, and unicorns, but also a way to tell children, in the form of an allegory, the story of redemption through the sacrifice of Jesus (here represented as Aslan, the lion, son of the Emperor of Beyond the Seas, who allows himself to be sacrificed to save the life of one of the four children who are the main characters, one who had even betrayed him. Aslan then is “resurrected” and overcomes the forces of the evil White Witch.)

The same passion for telling the story of Salvation using the imagination is found in the Space Trilogy, in which the journeys of a simple philologist (modeled after his friend Tolkien) through space enable him to deal with some of the crucial problems of Christian doctrine, such as Adam and Eve’s fall and sin.

Whether novels, allegorical works, or essays, Lewis’s books are striking for the way he addresses his readers, sure of what he is communicating and always on the road alongside them, never fearful of showing his own weakness (as in the extraordinary A Grief Observed, written after his wife’s death), precisely because he had experienced that salvation was a work of Grace, and that we need only to discover the “road signs” God has disseminated throughout all of reality to draw us to Himself.