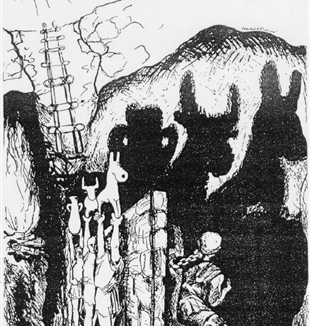 “While you are reading this article, you are surely convinced you have a magazine made of paper and ink in your hands. You do not doubt the existence of the magazine or of the sofa where you are sitting or of your body. But are you really sure this is the way things are?”

We can add parenthetically the softness of the sofa and the malt aroma of the Scotch in the glass, good things that transmit a sense of good reality, which it is hard to fight. But let us be sure of at least one thing. The first answer to that question that comes to mind is the one given by our old friend Aristotle: it is mad to ask the reasons for what the evidence demonstrates to be fact. In the Year of Our Lord 2004, who sows doubt on the “reality” of reality? The question quoted in the first paragraph was posed by the science monthly Focus, which devoted a report to an allusive “fashionable” topic: according to certain recent scientific and philosophical theories, reality as we know and perceive it could possibly not exist at all, and be just a product of our own minds. Or worse still, it could be a great simulation created by a computer of another civilization with unimaginable abilities. In that case, we would just be part of one big computer program–characters in a videogame, free to play the part assigned to us by “someone” who is watching us from who knows where.

As a mass-circulation magazine, Focus limits itself to reporting and offering to its readers some points for reflection contained in contemporary theories, polishing them up a bit with a little science fiction. We are happy to leave the judgment on the plausibility of the theses to specialists. But it is true that the closer science seems to get to the “secrets” of the cosmos or life, the more crucial the questions become. It is enough to think of the expectations revived by the arrival of the robot Spirit on Mars. The first images of the red planet reawakened the eternal questions: if we should happen to find signs of life up there, how would this change our perception of reality? The problem is the quality of the answers. The philosopher Gianni Vattimo dealt with the topic in the Italian daily La Stampa. And he resolved it more or less like this: if we should discover that we are not the center of the universe, everything we are and know would become relative and useless. This is a feeble answer to an interesting question. In the field of the infinitely small, genetics poses analogous questions about the “substance” of reality: if even the origin of life can become artificial, what true origin does life have? In this case, too, the answers are often on the level of Vattimo’s: if the origin of life can be manipulated, then the origin does not exist.

Shakespeare’s mood
Questions about the “substance” of reality are not exclusive to our time. Calderon asked if life were a dream; Shakespeare suspected it was “a tale told by an idiot, full of sound and fury, signifying nothing.” The difference is that what was a cry of poets has now become a mood, a general atmosphere of society, like the plot of a film inexorably projected around us. Thus the suspicion floats around in the air, banal and marked by skepticism, that reality is a trick, nothing more than a deception. This mood bears within it, above all, existential uncertainty, the moral interchangeability (at least presumed) of choice, and, at bottom, a sneaking feeling of “it’s not worth it,” in a global version, offered at supermarket prices. After all, what other feeling about oneself could derive from theories like those of the philosopher Nick Bostrom of Cambridge, according to whom “it is more probable that our world is the result of a computer program than that it is made up of atoms as we believe.”

Brief parenthesis on uselessness
What if it were all useless? No, not useless to live, as Bostrom seems to suggest. But useless to posit theories like this: scientists are forced to hypothesize that a civilization exists that is so superior as to have created a computer perfect enough to simulate the universe in every detail. Try thinking about it. If a computer existed that was capable of counting every last hair, predicting even the last margin of human freedom, what could we call it? Maybe… God. It would be like God, only bad. So why expend so much energy?

The bug and the link
But, after all, this is academics. In human terms, the more interesting thing lies elsewhere. Scientists themselves admit that if reality were only a great fiction, we should ferret out somewhere the bug in the software, or the “link that does not hold,” as Montale called it. In short, an imperfection that would reveal things as they really are. The problem is that, up to now, no “bugs” have been found in the universe. And so even science and philosophy find themselves in front of a simple, grand answer, capable of refuting every “conspiracy” theory of reality. It is the realization of one’s own freedom. In fact, the problem of human freedom, says Focus, is precisely one of the stumbling blocks: if we lived inside a computer simulation, scientists admit: “We would be free, but only within the limits of the rules imposed by the program.” Experience shows us that this is not the case.

The Cave and Christmas
Suspicion about reality is a typical characteristic of our time. But even more typical is the role of science as the “religion of our time,” to the point that it has aroused the sarcasm of secular scientist Piergiorgio Odifreddi: “Natural theology has ceased to be the prerogative of priests and philosophers and has become a proving ground for scientists.” Einstein’s saying has become famous: “Science without religion is lame; religion without science is blind.” To tell the truth, science today often seems to be carrying around the vice of bad religion, which is the conviction that reality has its own meaning apart from reality itself, closely akin to the conviction that reality has no meaning, period. Whether it is the invention of a computer or the deception of a demiurge (“the usual deception,” says Montale) matters very little. This is an attitude that goes beyond Matrix-type science. Plato already expressed it fully in his Myth of the Cave, which says that men are like enchained slaves, forced to see only the shadows of an illusion. It is no coincidence that Focus cites this myth as an early, authoritative hypothesis that reality lies elsewhere.

Matrix or Plato, the sensation is that of a Gnostic dead end, from which Péguy saves us: “It is tempting to deny the earth… one arrives at these vague spiritualisms, idealisms, immaterialisms, religiousisms, pantheisms.” Matrix or Plato, at Christmas we learned that “with Him everything exists, even the tiniest poplar leaf, ephemeral but existent.” Truly, “the announcement that God has become Man” is the fact that “triumphs over all man’s disbelief and doubt.” And it is also the principle that simplifies life.