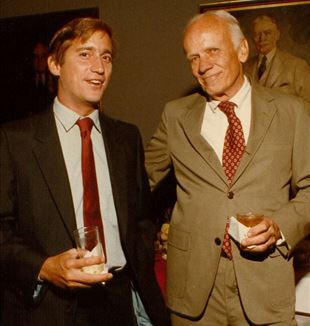 According to Walker Percy, one of the preeminent American novelists of the late twentieth century, there are billions of aliens living on planet Earth, creatures who look and talk and act just like you or me. These aliens did not arrive on spaceships, nor do they possess strange, magical powers. The reason for this, Percy held, is that the aliens are us. “Man is the only alien creature, as far as we know, in the entire Cosmos.”

A Serious Joke
Percy was joking, of course, but in a serious way. One of the fundamental experiences of human life, he believed, was that of self-consciousness, that awkward sense of somehow not fitting into the universe. In a famous essay, Percy wrote “The Man on the Train,” the typical modern commuter who feels alternately bored and anxious–in the grip of nothingness. Another image he used in his writings was of the “Wednesday afternoon at four o’clock” feeling: a blankness or lostness that often overcomes us.

All this may sound a bit like the modern school of philosophy known as “existentialism.” In fact, Percy was profoundly influenced by the thinkers who had been associated with this form of thought. But Percy was not a mere prophet of gloom and despair. For him, man’s status as an “alien” was also a sign of hope, because in this condition of painful self-consciousness man may recognize himself, in the words of St Paul, as a “stranger and pilgrim” on the earth: a dependent being who may yet find meaning and salvation in an encounter with the source of his being. Percy was particularly fond of the Catholic existentialist Gabriel Marcel, who coined the phrase homo viator–man as pilgrim or wayfarer.
These insights suffuse all of Percy’s work, which includes six acclaimed novels and three nonfiction books, and which made him one of the most powerful literary voices of his time. Who was this man, this playful ironist who joked seriously and wrote not only philosophical analyses but also compelling stories grounded in the ordinary circumstances of late twentieth-century life?

Overcoming Early Tragedies
The man who became such an important writer and thinker might easily have been swallowed by the tragedies that marred his early life. Born in 1916 in Birmingham, Alabama, Walker Percy’s father was a deeply melancholy man who committed suicide when his son was only thirteen. With his mother and brother, he moved into the home of his father’s first cousin, William Alexander Percy, himself an acclaimed writer and social activist. Three years later, his mother was killed in an automobile accident.
The young Percy weathered the emotional storms of these losses and went on to graduate from the University of North Carolina, where he became enamored of science. He attended medical school at Columbia University, where he received an MD in 1941. It was while treating patients for tuberculosis that he contracted the illness himself, forcing him to live in a sanitarium for three years.

During his convalescence, Percy read widely. His initial fascination with science as the ultimate framework for understanding human life no longer satisfied him. So he turned to the writings of existentialists like Jean-Paul Sartre, Albert Camus, and Marcel. He was particularly taken with the thought of Soren Kierkegaard, the Danish Christian thinker who is often credited with being the forerunner of existentialism.

Three Modes of Experience
Kierkegaard’s understanding of modern man’s sense of displacement led him to analyze the ways human beings sought to escape from this condition. Many people chose to live in an “aesthetic” mode of being, seeking consolation in certain small pleasures of perception and experience. Because this view often failed to satisfy the human heart, the next step taken by many, Kierkegaard argued, was to accept an “ethical” mode of life, seeking a moral perspective on the world. But this too left most people with unfulfilled desires. The final step, then, was the “religious” mode, the leap of faith that gave the individual a sense of confident dependence on God.

While he was reading Kierkegaard, Percy also studied the novels of Dostoevskij, who also discovered in the Christian faith an antidote to modern ideology. In addition, Percy became engrossed in the works of such modern Catholic writers as Marcel, Thomas Merton, and Romano Guardini. In 1947, he was received into the Catholic Church.

After the emotional and intellectual ordeals through which he had passed, Percy no longer had an interest in practicing medicine. He and his wife moved back to the South, settling in the small town of Covington, Louisiana, across Lake Ponchartrain from New Orleans. There, Percy began to write a series of essays on philosophy, theology, and language. He was especially fascinated by the way language provided an understanding of human consciousness. In the study of semiotics, or the theory of signs, Percy found a way to explain both man’s sense of alienation from the world and also an argument for transcendence as the only adequate explanation for our ability to perceive meaning in the world.

Setting Out on “the Search”
Despite gaining respect for his intellectual essays, Percy felt that philosophy was not his natural language. He came to believe that his gift was to take these large issues and explore their effects on the concrete details of daily life. He wrote two novels that he decided were unpublishable and he discarded them. Finally, in 1961, he published The Moviegoer, the story of an alienated young man named Binx Bolling who decides to embark on what he calls “the Search” for truth amidst the triviality of a materialistic society. When the story opens, Binx is consciously cultivating Kierkegaard’s aesthetic mode of life, watching movies obsessively and trying to validate his life by comparing scenes and stars in movies with his own experience. When this fails to satisfy his desire, he looks to his aunt’s Southern “stoicism” for an ethical code, but it is not something he can embrace. By the end of the story, Binx seems poised on the brink of faith, learning to accept his need to depend on others. The Moviegoer garnered critical accolades and won the National Book Award. Percy’s career as a novelist and cultural critic was launched.

While Percy’s Catholic humanism went against the grain of the prevailing cultural trends of his time, his writing was so powerful, funny, and poignant that he gained the admiration of many readers. Yet he could also offend many of his fellow Christian believers. He argued, for example, that Christians had abused religious language so much that they had drained it of meaning, making faith something that is more an expression of politics than a lived experience. He took fundamentalists and liberals equally to task for allowing politics to obscure the event at the heart of the Christian proposition.

Lost and Found
One of Percy’s funniest and most revealing books was a work of nonfiction entitled Lost in the Cosmos: The Last Self-Help Book. In its pages, he used a whole array of devices, from parodies of TV shows to multiple choice quizzes to an extended section on semiotic theory, in order to expound his vision. At the end of the book he wrote a science fiction scenario about aliens who encounter human astronauts in space. The aliens have achieved a fully integrated consciousness: they are aware of themselves as dependent creatures in need of salvation. In questioning the astronauts, they uncover the failure of modern scientism to provide an adequate goal for human desire. “Have you requested help?” the aliens ask. “Has help arrived? Did you accept help?” The aliens reveal that their civilization experienced an event that changed them forever, but the humans seem to have ignored any such event in their own history.

Though Percy lived on the margins of the mainstream cultural world, he did gain some precious forms of recognition toward the end of his life. He was invited to become a member of the Pontifical Council for Culture and was asked to deliver the prestigious Jefferson Lecture for the National Endowment for the Humanities. He died in 1991, after a struggle with cancer.
The man who had retired early as a doctor argued that the novelist ought to be like a doctor, becoming the diagnostician of the soul’s predicament. Those who read Walker Percy will find not only a brilliant diagnosis of what ails modern man, but a prescription for a full and lasting cure.