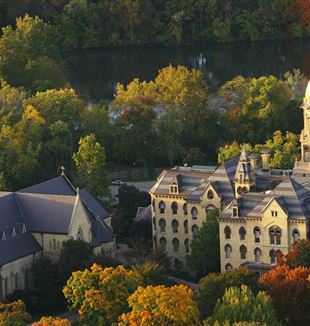 In short, from the founding of the republic to today, this has been a nation in which notions of liberty and justice are intimately bound up with the language of rights. Here at the University of Notre Dame, where football is the second religion, before every game the 80,795 spectators not only sing the national anthem but also listen to a public reading of portions of the Preamble of the U.S. Constitution and the familiar passage of the Declaration of Independence in which “we hold these truths to be self-evident: that all men are created equal; that they are endowed by their Creator with certain inalienable rights; that among these rights are life, liberty, and the pursuit of happiness.” In the national trauma following September 11, 2001, even our schoolchildren were taught that the Bill of Rights is the distillation of the values that make America free and great. The American infatuation with rights talk is abundantly evident in most of the deeply contested social issues of the day–education, abortion, homosexual unions, racial inequality, and capital punishment, just to name a few.

Rights grounded in human dignity
The problem with this is that the language of rights is ambiguous. Where rights come from, and what they point us to, depends entirely on our implicit understandings of the nature of human persons, society, and the state. In the teaching of the Church, the idea of individual rights that emerged from Enlightenment liberalism has been consistently rejected as presenting a false and reductive understanding of the meaning of humanity. Instead, in modern times, the Church has recovered and re-proposed a more ancient understanding of the meaning of our rights as grounded in the dignity of the human person created by God. Pope John XXIII, for instance, taught in his encyclical Pacem in Terris that “every human being is a person [and] precisely because he is a person he has rights and obligations flowing directly and simultaneously from his very nature.” The true and ultimate aim of those rights is nothing less than our relationship with the mystery of God:

“ When society is formed on a basis of rights and duties, men have an immediate grasp of spiritual and intellectual values, and have no difficulty in understanding what is meant by truth, justice, charity, and freedom. They become, moreover, conscious of being members of such a society. And that is not all. Inspired by such principles, they attain to a better knowledge of the true God–a personal God transcending human nature. They recognize that their relationship with God forms the very foundation of their life–the interior life of the spirit, and the life which they live in the society of their fellows”. (Pacem in Terris, no. 45)

The present Pope has insisted on this vision throughout his pontificate, giving the notion of human rights an unprecedented prominence in his teaching.

Brutal reduction of the mystery
Is this understanding consistent with the way that “rights” and their anthropological foundations are used in modern American politics and law? Consider, by way of a particularly stark contrast with the passage from Pacem in Terris, the infamous words with which the U.S. Supreme Court in 1992 (in Planned Parenthood of Southeastern Pennsylvania v. Casey) affirmed the constitutional right to be free of state interference with a woman’s desire to obtain an elective abortion: “At the heart of liberty is the right to define one’s own concept of existence, of the universe, and of the mystery of human life.”

The depth of difference between these two understandings of our politics and our humanity is profound. The first situates our social life in a relationship with a reality that is given to us and that is good. It helps us flourish by directing our hearts toward the eternal through our love and responsibility for one another as human persons. The second reduces the entirety of the mystery of being to the personal preference of each solitary individual, and reality to a free-floating projection of our own will. Both are concerned with “freedom,” but the former conceives of freedom as inseparable from an objective order of truth, justice, and charity; the latter contemplates freedom as pure subjectivity untethered from human reason.

A Genuine Concern for the Person
For many Americans there is a superficial attractiveness to the idea of liberty as the absence of coercion with respect to one’s most basic choices in life. But to assert that freedom is not about reality does not in fact respect our humanity; it destroys it. It does not liberate us from power; it makes us utterly subjected to the whims of the powerful. Translated into the force of law, the consequent destruction of humanity is not merely metaphorical but brutally literal–the “right to define one’s own concept of the mystery of human life” becomes the justification for the killing of innocent human life on a massive scale. It is not an accident that the same passage from Casey has since been invoked by courts to justify euthanasia as well.

Where, in American political life and its thicket of rights and freedoms, will we encounter a genuine concern for the human person? Not in our own fantasies of the mystery of the universe, but in a human face. As the Pastoral Constitution on the Church in the Modern World beautifully reminds us, “The truth is that only in the mystery of the incarnate Word does the mystery of man take on light.” (Gaudium et Spes, no. 22) And it is only in the mystery of Christ that the meaning of the American desire for freedom is illuminated most fully, as well.