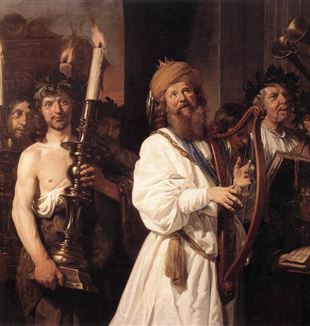 “We are born with this book in our innards,” the famous Jewish scholar André Chouraqui says today. “They express a devotion filled with authoritativeness,” said St. Ambrose 1,700 years ago. “They introduced me to God, not to faith in God, but to a tangible sense of God,” says Paul David Hewson, stage name Bono, the leader of the band U2. “Singing them, we express the affection of him who loves,” said St. Augustine, seventeen centuries ago. What book are these people talking about, these figures so different from each other in nature, occupation, epoch? They are talking about the Psalms, the 150 verse compositions set right in the heart of the Bible, written over an immense span of time, handed down orally for centuries and then inserted into the Hebrew Canon after the Torah and the Prophets, first among the Writings. How many times have those tender and powerful verses echoed on human lips? How many times have they taken up the expectations and entreaties, the anguish and happiness of us, little creatures, in our pilgrimage on the Earth? And what other text has been able to stick so objectively and with such familiarity to our hearts? To answer these questions, all one has to do is open the Book of Psalms to any page and let one’s eye fall on any one of those thousand verses, so dense with mercy toward our frailty.

Psalm comes from psalmòs, which in Greek means, “song accompanied by a stringed instrument.” And psalterion (from which we get psaltery) means this instrument, whether a harp, a kithara, or a lyre. A deeply rooted tradition attributes a large part of the Psalms to David, the King of Judah and Israel, a thousand years before Christ. The Bible itself calls him, “singer of the songs of Israel,” and testifies to his extraordinary ability to play the lyre (which gained him entrance into the court of King Saul), attributing to him a moving sensitivity in composing funeral laments. The tradition about David is so solid that even today Bono, that great figure of the rock world, calls David his forerunner. Bono writes in the recent, very beautiful introduction to the Book of Psalms prepared by Einaudi: “David was undoubtedly a performing artist… one who had the humility to recognize that his ‘gift’ functioned much better than he himself did.” In reality, historians do not know how many of the Psalms can truly be attributed to David; some 73 are designated with the formula “le-Dawid,” which can mean “by David,” but even more probably means “about David,” or “for David.” The fact that these 73 Psalms were placed at the beginning of the collection has favored the spread of the idea that all one hundred fifty should be assigned to his hand. Careful historical investigation has led to the conviction today that they were composed over a span of almost a thousand years, peaking in the time of the monarchy after David and before the Babylonian exile (thus between 800 and 600 B.C.).

A Hebrew climate
But what do the Psalms possess that makes them so powerfully attractive even to men living three thousand years later? Father Giussani, in his recently published book containing his reflections on the Psalms, Che cos’è l’uomo perché te ne curi? What is Man That Thou Art Mindful of Him?–edited by San Paolo–explains it in this way: “They are the form of dialogue defined by God Himself for His relationship with His chosen people.” So the subject (one wants to say the author) of the Psalms is God, who not only dictated the words of this dialogue, but indicated also their reader, their addressee, the Hebrew people. Father Giussani continues, “Those who recite them absorb a Hebrew climate, defined completely by that expectation of fulfillment aroused in human history in a manner that cannot be found in any other form of religiosity.” The consequence is that “one can hardly understand the Christian experience if he is not willing to relive in some way the history of the people of Israel, with all its accents and all its dramas.”

Elia Kopciovsky
Elia Kopciovsky, former Head Rabbi of Milan, who together with Father Massimo Camisasca presented Father Giussani’s book at the Milan Cultural Center, took as his starting point this statement that, as he confessed, helped to “dispel all my perplexity.” Why do Jews and Christians feel so close together before these words, which may have sprung forth from the heart and genius of David? “Because they express an expectation of fulfillment which defines man,” Kopciovsky answered. “The Psalms, as Father Giussani says, move from a passion for man who, faith tells us, is a creature ‘loved and watched over by God.’ Giussani adds ‘Christian’ to ‘faith.’ I take the liberty of saying simply faith, because the Jewish position as well is completely analogous.” In what sense do Judaism and Christianity converge? “In the sense,” the Rabbi explained, “that both emphasize God’s relationship of fatherly love with man, to whom He granted the immense gift of being made in His image and resemblance. This is why the Jew wants not only to live with God, but to live with God in every moment of his life.” With his characteristic way of gesturing, so full of liveliness and wisdom, Kopciovsky then moved to another point made by Giussani which aroused his excitement. It is on page 72: “The sanctuary of God… is the gathering place of all those who have recognized that God is all.” The Rabbi commented, “The Jew says that each man must act so that every house may be a sanctuary. He must be a collaborator with the Eternal Father; in this lies our satisfaction. The sanctuary is in the fibers of our conscience. By what signs? By the miracles that the Eternal works every day. But are we able to discern these miracles?”

Collaborators with God
Question by question, Kopciovsky arrived at the one that lends the book its title, “What is man that Thou art mindful of him?” “In Exodus, it says that one of the moral qualities of God is a Hebrew word that is difficult to translate, which means participation in another’s life, affection, identification with one’s neighbor. God opened up a relationship with man, making him a collaborator in his own creation. He made him not to create from nothing, for that is a prerogative only of God, but to improve, to lift up that creation. And do we have the right not to imitate the Lord in this task?” Then Kopciovsky allowed himself a small digression, offering an effective example: “In Leviticus, where the commandment is given to love your neighbor as yourself, the verb ‘love’–in the only instance in the whole Bible–takes the dative instead of the accusative case. It should be translated as ‘love for your neighbor,’ that is, ‘love the good of your neighbor’–which is to say, creation. Collaborate with God to make it better.”

There is a moving contrast between the frail figure of this elderly rabbi and the powerful positivity that his words express. But as the Psalm says, it is not my own strength that sustains me, but “Your strength” (“the muscle of His right hand” is Father Giussani’s helpful gloss, on page 74). No matter how ephemeral and frail, the flesh of the Hebrew people vibrates with the sign of the covenant with God, of their being chosen by the Lord. An echo of this can be heard in the word “amen,” which Kopciovksy commented on in his conclusion. “When I say ‘amén,’ it means ‘that is true,’ ‘I agree.’ And all my personality is saved in this faith, in this unshakable trust in the Eternal Father who created us.” What are the Psalms if not the word that attests to this tender and burning dialogue between the Lord and the people that has been His dwelling place in history?