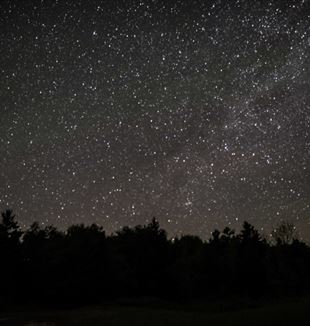 "My main merit has been that I had students who were better than I!" This is how Nicolò Dallaporta introduces himself, and you know immediately that you are in the presence of someone great. His humility shows no sign of being deliberately put on, but is instead a luminous simplicity, earned over a long life as a researcher and a sincere lover of truth. Dallaporta, born in 1910, is one of the fathers of modern cosmology, the founder of a school that with time has grown up strong and healthy in Italy and on numerous fronts has emerged at an international level. From his Chair of Theoretical Astrophysics at the University of Padua, Dallaporta has raised a large segment of the generation that currently leads astrophysics in Italy. From the beginning, his interest in science has been united with an interest in the fundamental questions that underlie all of human experience, as demonstrated, for example, by his in depth studies of the "Galileo case," as well as the most recent of his numerous works, Scienza e Metafisica, uno pseudo-contrasto tra due domini complementari (Science and Metaphysics, a pseudo-contrast between two complementary domains, published by Cedam).
I went to the professor's house in the heart of Padua for a dialogue that I was awaiting with trepidation. Rachele and Maria joined us to take the notes that are presented in these few lines. We sat in the elegant living room, with glasses of orange juice and ill-concealed emotion.

Professor, within the arc of your long experience as a protagonist of scientific research, how do you view the present moment?
It is my opinion that Galilean science has run its course. That Galileo conceived it is understandable, but today we can see its limits easily, and they are serious ones. It would appear from Galileo's vision that all of science is based on the relationship between cause and effect. But we know very well that the only problems resolved in an exact manner by Galilean science are the extremely simple cases, which approximate physical reality in a fairly rough way. Galileo studied the pendulum and the solar system: the simplest things in existence. Naturally this was a great step forward, but approximation is fine only up to a certain point. The laws of physics are simple only in certain "zones" for certain extreme cases. The moment comes when perspectives have to be widened. Beyond a certain level, when the complexity of the problems or the systems that one intends to describe is great, it is easier, more convenient, to think about the goals rather than the causes. The element of the goal is completely neglected in Galilean science, but I am convinced that just as there is a search for causes there also has to be a search for goals. This is a complementarity that I feel is indispensable for a passage to a true understanding of nature.

I am struck by the fact that this need to reconsider the idea of goal, of "purpose," is emerging today from within certain currents in science itself, almost like an unwanted child. Until a few years ago, hypothesizing this would have been bold, to say the least. I am struck in particular by the idea that in cosmology you are almost forced to rethink the role of the human being in the cosmos. The human "I" is presented as a very particular object, the site of self-awareness of nature, which in order to be the way it is needs all the structure and all the evolution of the natural, cosmic, and local world, in order to surface, even though it is not determined by these.
The human being is the most complex thing there is, it is an intertwining of causes and goals. We always live with a purpose, to accomplish something. What is man? This question introduces the entire dimension of man, and is one for which I will never accept the answer that he is the pure consequence of events that precede him. Life, the human being in particular, is an incredible fact from the scientific point of view. To put together all the "wheels" that go together to make up a human being with their delicate balance, it is evident that there has to be Someone who planned it. Reality is made up of layers, of levels: supreme principle, spirituality, soul, body. Man is, even within his limits, a flash of the Infinite; he is something miraculous. All of life is a miracle and man is the greatest miracle of all. But for God everything is a miracle, there is no difference between miracle and non-miracle!

And everything appears to have been prepared so man could emerge. The fineness with which the basic constants of physics are calibrated for complexity is truly overwhelming…
I realized… all you need is an infinitesimal change in the constants for life not to be formed. We do not know why these constants are the way they are, we have no other reasons! It is a clue for seeking a cosmology that aims at considering what could be the points of contact with other levels of reality.

To get away from this evidence, cosmological scenarios are offered that in one way or another repropose a form of the old principle of plenitude ("everything that can exist, does exist"). The existence is thus postulated of an infinity of chances, among which "our case" becomes an obvious favorable case (today the most popular form is that of multi-universes). What is your view on this?
It is very possible, but it is not physics. It is a metaphysics in which recourse is made to a chance that is so enormously limitless that everything that is possible is real. But in this way it becomes a confrontation between metaphysics in which chance collides with purpose. This latter, however, seems much easier to believe! Physics up to now has been based on measurable "data." Beyond this it is a passage of metaphysics. At this point I compare it with another metaphysics. Those who sustain these viewpoints (like Stephen Hawking, for instance) should realize that this goes beyond physics; otherwise it is exaggerated. Physics, pushed beyond what it can measure, becomes ideology.

It seems to me that underlying this there is a certain meaning of the concept itself of reality. Father Giussani states that what does not in some way have a connection with the present, with the "here-and-now," does not exist. I have always been struck by the analogy, or the pertinence, of this statement about reality with regard to scientific knowledge.
The hypothesis that the observer has nothing to do with the observation, and thus that he can be considered in some way extraneous to reality, is in open contrast to physics, in particular to quantum mechanics. The human "I" comes into it. It is a piece of data taken out of physics that goes beyond physics.

Another aspect in which the cosmologies that aim to reduce all of physical reality to "limitless chance" seem to me to be weak and hardly credible is that if they are taken seriously, they have consequences which are anti-aesthetic, or rather, grotesque, nauseating. But, historically, aesthetic intuition is a fundamental guide to the development of scientific ideas.
Beauty is the harmony of two things that are put there, and if they were different they would not be beautiful. All of physics is based on specific laws that are relationships of harmony, and it is my conviction that physical causality cannot be reduced solely to the corporeal plane. The laws, which come from above, are such that acting on A and B they cause A and B to behave in such a way as to give rise to a law of harmony. Newton's Law is a law of beauty: God created it in such a way that in the end two bodies revolve around each other!

Today the emphasis in the world of research and also in the university is to go to extremes in the pursuit of details…
Often it happens that each person is pushing one little channel and doesn't know anything but that. The great themes have very little resonance. But the problem is that today scientists no longer have time to think. Physicists have "thought" up to the generation of Hesemberg and Shroedinger. After that, there has been no time for this. The quantity of knowledge and information has grown so fast that it is increasingly difficult for a scientist to have a view of the whole.

Perhaps also because culture has lost its moorings in this sense. It is increasingly rare (but not only among scientists, I believe) for a person to admit the idea itself of a whole. It is denied that things have a connection with the whole, and thus a unity, a meaning.
Certainly. A Gothic cathedral or an icon, instead, proposes an overall picture, they contain within themselves an image of the whole.

Professor, if you had to start out today with a new research project in cosmology, what would you choose?
An important theme is the generalization of what we were saying before. Until now the effort has been made to study the effects of the structure of nature and its laws by considering the variation of only one physical constant at a time, and the criticality of this was discovered. I would try to go more deeply into this, studying the effects of the variation of more than one constant at the same time. It is demanding, it requires very complex calculations.