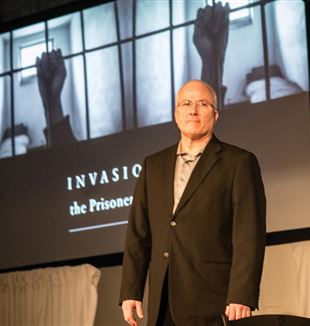 Music, and especially singing, have always been a fundamental aspect of the life of the Movement. In the case of the community in New York, this is particularly true.

Among the many fruits of this connection with music-from the CL choir to the friendship with David Horowitz-is the CD Spirituals and Songs from the Stoop by the Bay Ridge Band, produced by Eurocompany, now released in Italy. And now, in New York, a small music school is being formed. We spoke about this unexpected CD recording and about the school with Christ Vath, a musician by vocation, "the man behind the CD" and behind the school.

Chris, where does the music of the Bay Ridge Band come from?
A lot of the songs that we are doing now are the songs that my family sang together. All Night All Day, Bamboo… those are songs we were singing in the car going up to my grandparents' house. This was during the time period when Americans often sang together communally. It seems this time has ended; you don't see this kind of community singing much anymore.

You have played since you were a child, but after your encounter with the Movement and your years in Italy, things have changed.
I started playing at the age of two. I loved being in my high school choir and I went on to college to major in piano. In Italy I got connected with Luciano Gentile who was working for Fontana Teatro and he got me involved in various projects. Little by little, working with him taught me to communicate. That is, the experience I was having in the Movement and the friendships with other musicians in particular spurred in me the desire to actually communicate something in my music, starting with playing the piano. This was new and exciting because before then I was a little self-absorbed. With Luigi Zanardi I did some concerti a quattro mani, Mozart, Rossini's overtures. Luigi also got me involved in teaching chamber music for children at a school in Seveso. In the meantime I had a little choir in another school.

Then you came back to New York.
I found a lot of people interested in music, several people who were very good, including some guitarists, and so we re-started the choir, but this time it was much more serious than it was before. There was much more maturity regarding the meaning of the music, and more desire to communicate this meaning.

But what does all this music communicate?
The Christmas Concert this past December was the combined effort of the CL choir and the children's choir in the parish where I work. It was very clear to me that I wanted the children, their parents, and the parishioners to experience something beautiful, something that they'll look for again. That "something greater" was communicated was attested to by those in attendance, and I hope to offer more of this type of thing. When I had played piano, I was concerned with perfection. Perfection of technique, perfection of musicality. Not that this is a bad thing-it's only partial. After a while in the Movement, my perception began to change. Where was I, as a person, in my performance? What could be communicated to me in the music? What could be communicated for me in the music? And its consequence: what could I communicate to the listener? Therefore, the music became something living for me-an event, as we would say. Technique and musicianship weren't thrown out the window, but rather, became tools that helped this personal experience (which is paradoxical, because what was more personal opened up the music to more people.) My stint in Italy was very useful for this, because I got to put this into practice in my work with Luciano Gentile and Luigi Zanardi, for whom this was already second nature.

You work at a church and teach private lessons. Why are you also thinking of forming a "music school?"
The idea for the school came out after the summer vacation, when Jonathan came up to me and said, "We had such a great time making music together that we should really think about something more public, to educate people to something so great."

I said, "Yeah, yeah…" thinking the idea was going to die quickly. When I came back from the vacation and saw so much interest in the school, I realized that this was something I wanted to be part of. I thought that it would be a great challenge to my faith, as well as an audacious proposal within our culture.

What about the CD?
The original idea came up because we needed money to start the school. I pulled out all these songs I remembered from the past, and found some new music too. In the meantime people in the Movement here in N.Y. had written some songs. So I put all these things together, I did some arrangements, which I really enjoyed doing, and we got together. We risked, and everyone was very happy; it was a great experience of music and friendship. I think you can hear that in the CD.

What is this school?
It is sharing the passion and desire of some with everyone. Among the "founders" are musicians and non-musicians, people who teach and people who want to share in the construction of our charism through the teaching of music and relationship with students. We would like for the school to become also a place where all the certainty that we feel in this area can emerge and be fully appreciated. At our two locations, one in Brooklyn and one in Manhattan, we will teach how to read music, piano, guitar, violin, bass, and singing. And then, in time, we'll see… Music, like everything else in life, is not just a technical matter…