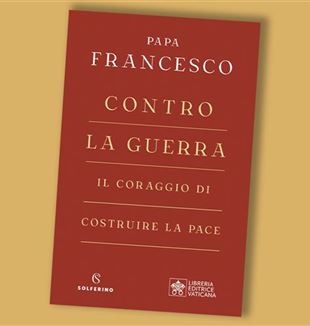 A year ago, on my pilgrimage to tormented Iraq, I was able to touch the disaster cause by war, fratricidal violence and terrorism with my own hands; I saw the rubble of homes and the wounds of hearts, but also seeds of hope for rebirth. Never would I have imagined then that one year later a conflict would break out in Europe. From the beginning of my service as bishop of Rome I have spoken of World War III, saying that we are already living it, though still in pieces. Those pieces have become bigger and bigger, merged together.... So many wars are going on in the world right now, causing immense pain, innocent victims, especially children. These are wars that cause the flight of millions of people, forced to leave their land, their homes, their destroyed cities to save their lives. These are the many forgotten wars that reappear from time to time before our inattentive eyes.

These wars seemed "distant" to us until now when, almost suddenly, war has broken out near us. Ukraine has been attacked and invaded. Unfortunately, many innocent civilians, women, children and the elderly have been affected by the conflict, forced to live in shelters dug into the ground to escape the bombs, with families divided because husbands, fathers, grandfathers have been left behind to fight whilst wives, mothers and grandmothers seek refuge after long journeys of hope and cross the border seeking refuge in other countries that receive them with open hearts.

In front of the heart-breaking images that we see each day, in front of the cry of children and women, we can only scream: "Stop!". War is not the solution, war is madness, war is a monster, war is a cancer that feeds on itself, engulfing everything! What's more, war is a sacrilege that wreaks havoc on what is most precious on our earth, human life, the innocence of the little ones, the beauty of creation.

Yes, war is a sacrilege! I cannot fail to recall Saint John XXIII’s plea in 1962 in which he asked the powerful men and women of his time to stop the escalation of the war that could have dragged the world into the abyss of nuclear conflict. I cannot forget the forcefulness with which Saint Paul VI, speaking in 1965 at the United Nations General Assembly, said: "Never again war! Never again war!". Or, again, the many appeals for peace made by Saint John Paul II, who in 1991 called war "an adventure without return."

What we are witnessing is yet another barbarity and we, unfortunately, have a short memory. Yes, because if we had memory, we would remember what our grandparents and parents told us, and we would feel the need for peace just as our lungs need oxygen. If we had memory, we would not spend tens, hundreds of billions of dollars on rearmament, to equip ourselves with increasingly sophisticated weapons, to increase the market and the traffic of weapons that end up killing children, women, the elderly: 1,981 billion dollars per year, according to calculations by a leading research center in Stockholm. This represents a dramatic increase of 2.6% during the second year of the pandemic, when all our efforts should have been focused on global health and on saving lives from the virus.
If we had memory, we would know that war, before it reaches the front lines, must be stopped in our hearts.