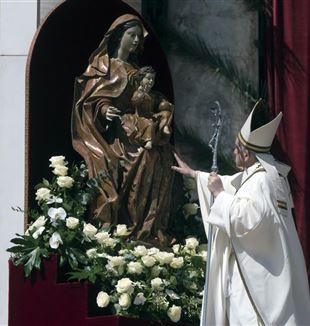 "Please, please, let us not get used to war! Let us all commit ourselves to imploring peace, from our balconies and in our streets!” Pope Francis, a prophet who has not been listened to, has been warning the world for years that it is headed towards World War III; and he repeated this again on Easter Sunday, during his Urbi et Orbi message: "May the leaders of nations hear people’s plea for peace. May they listen to that troubling question posed by scientists almost seventy years ago: “Shall we put an end to the human race, or shall mankind renounce war?” (Russell-Einstein Manifesto, 9 July 1955).” Shortly before pronouncing these words, Francis had said, "We emerged from two years of pandemic, which took a heavy toll. It was time to come out of the tunnel together, hand in hand, pooling our strengths and resources... Instead, we are showing that we do not yet have within us the spirit of Jesus but the spirit of Cain, who saw Abel not as a brother, but as a rival, and thought about how to eliminate him. We need the crucified and risen Lord so that we can believe in the victory of love, and hope for reconciliation. Today, more than ever, we need him to stand in our midst and repeat to us: ‘Peace be with you!’”

Pope Francis' words against war have become a "sign of contradiction" for nearly two months now. His message for peace, firmly anchored in the Gospel and in the magisterium of his predecessors of the last century, is striking because of its radicality and has been the object in recent weeks of various attempts to downgrade it. Not being able to interpret the desired meaning of the Pope’s words, not being able to "bend" them in any way in support of the accelerated arms race following the war of aggression unleashed by Vladimir Putin against Ukraine, they have chosen to elegantly distanced themselves from them, concluding that the Pope cannot but say what he says because he is the Pope, but then it is alright to act differently.

Last March 24, Francis said, "I was ashamed when I read that a group of states have pledged to spend two percent of their GDP to buy weapons, as a response to what is happening. Madness! The real answer, therefore, is not more weapons, more sanctions, more political-military alliances, but a different approach, a different way of governing the world, now globalized, and of setting up international relations. The model of “treatment is already in place, thank God, but unfortunately it is still subject to that of economic-technocratic-military power.”

At the Angelus of March 27, the Pope reiterated: "War should not be something that is inevitable. We should not accustom ourselves to war. Instead, we need to convert today’s indignation into tomorrow’s commitment, because if we will emerge from these events, the way we were before, we will all be guilty in some way. Faced with the danger of self-destruction, may humanity understand that the moment has come to abolish war, to erase it from human history, before it erases humans from history.”

The position of the Successor of Peter has never been" equidistant". From the very beginning of this tremendous war in the heart of Europe, a conflict that seems to have turned back the clock of history eighty years, Francis has expressed his concrete closeness to those under attack in Ukraine. On April 2, in Malta, speaking to the island's authorities, Francis said, "Yet from the east of Europe, from the land of sunrise, the dark shadows of war have now spread. We had thought that invasions of other countries, savage street fighting and atomic threats were grim memories of a distant past. However, the icy winds of war, which bring only death, destruction and hatred in their wake, have swept down powerfully upon the lives of many people and affected us all. Once again, some potentate, sadly caught up in anachronistic claims of nationalist interests, is provoking and fomenting conflicts, whereas ordinary people sense the need to build a future that, will either be shared, or not be at all. Now in the night of the war that is fallen upon humanity, please, let us not allow the dream of peace to fade!"

"Over sixty years ago” – added the Pope – “in a world menaced by destruction, where law was dictated by ideological conflicts and the grim logic of blocs, a different voice was raised from the Mediterranean basin, countering the exaltation of self-interests with a call for a prophetic leap in the name of universal fraternity. It was the voice of Giorgio La Pira, who stated that “the historic juncture in which we are living, the clash of interests and ideologies that shake a humanity in prey to incredible childishness, restore to the Mediterranean a capital responsibility. It is that of defining once more the rule of a moderation in which man, abandoned to madness and lack of moderation, can recognize himself” (Intervention at the Mediterranean Congress of Culture, 19 February 1960). Those were timely words; we can repeat them because they have a great relevance. How much we need a “human moderation” before the infantile and destructive aggression that threatens us, before the risk of an “enlarged Cold War” that can stifle the life of entire peoples and generations.”

But, Francis noted again in Malta, "unfortunately, that ‘infantilism’ has not disappeared. It re-emerges overwhelmingly in the seductions of autocracy, in the new imperialisms, in widespread aggression, in the inability to build bridges and to leave from the poorest. Today it is so difficult to think with the logic of peace. We are used to thinking with the logic of war. From here the icy wind of war begins to blow, which once again has been fueled over the years. Yes, the war has been preparing for some time with large investments and arms deals. And it is sad to see how the enthusiasm for peace, which arose after the Second World War, has faded in recent decades, as has the path of the international community, with a few powerful people who go forward on their own, in search of spaces and zones. of influence. And so not only peace, but many major issues, such as the fight against hunger and inequality, have been de facto de-classified from the main political agendas.”

The voice of the Bishop of Rome seems to be crying out in the desert. The Pope looks further and sees the "pieces" of that third world war that he has been denouncing for years and that is being fought in the world, welding together more and more. The gesture of dedicating a day of fasting and prayer for peace at the beginning of Lent, and above all the decision to consecrate the whole of humanity, and in a special way Russia and Ukraine, to the Immaculate Heart of Mary speaks volumes about the severity of this moment.

It would be a mistake to "sterilize" this message, pigeonholing it into the category of utopian messages. Pope Francis shows that he has a profoundly realistic outlook, the same outlook that in 2003 made St. John Paul II implore the governments of three Western countries not to launch the absurd war against Iraq, unleashed on the basis of information that later turned out to be false. For decades that country was turned into the cesspool of all terrorism, and was devastated and destroyed. And the time needed to heal the wounds in the hearts and rebuild coexistence will always be longer than that of the reconstruction of the destroyed houses. Yes, because war, wrote Francis in the introduction to the book Contro la guerra [Against War], "is not the solution, war is madness, war is a monster, war is a cancer that feeds on itself, engulfing everything! What's more, war is a sacrilege that wreaks havoc on what is most precious on our earth, human life, the innocence of the little ones, the beauty of creation. Yes, war is a sacrilege!”

And the claim of those who believe they can win with the force of arms is ephemeral: " Why do we want to win like this, according to the way of the world?” – the Pope asked himself at the Angelus on Palm Sunday – "There are only losses this way. Why not allow Him to win? Christ bore his cross to free us from the dominion of evil. He died so that life, love, peace may reign. Let the weapons be put down! Let the Easter truce begin. But not to reload the weapons and pick up the fighting again — no! — a truce that will lead to peace, through real negotiation that is also willing to make some sacrifice for the good of the people. Indeed, what victory is there in planting a flag on a pile of rubble?”

In a world of leaders who reason according to the pattern of war, in the absence of diplomatic creativity or the capacity for political initiatives committed to the logic of peace, without rulers willing "also to make some sacrifice for the good of the people," when the madness of rearmament seems to be the only option and the only possible thought, the message of Pope Francis deserves to be heard. It deserves to be supported, valued and relaunched by the Christian people.