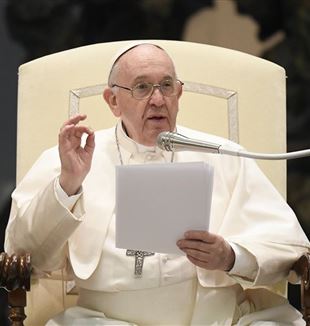 We are in the middle of Holy Week, which lasts from Palm Sunday to Easter Sunday. Both these Sundays are characterized by the feast that takes place around Jesus. But they are two different feasts.

Last Sunday, we saw Christ solemnly entering Jerusalem, as though for a feast, welcomed as the Messiah: cloaks (cf. Lk 19:36) and branches cut from trees (cf Mt 21:8) were laid before him on the ground. The exultant crowd loudly blesses “the King who comes”, and acclaims “Peace in heaven and glory in the highest!” (Lk 19: 38). Those people there celebrate because they see Jesus’ entry as the arrival of a new king, who would bring peace and glory. That was the peace those people were waiting for: a glorious peace, the fruit of royal intervention, that of a powerful messiah who would have liberated Jerusalem from the Roman occupation. Others probably dreamed of the re-establishment of a social peace and saw Jesus as the ideal king, who would feed the crowd with bread, as he had done already, and would work great miracles, thus bringing more justice into the world.

But Jesus never speaks of this. He has a different Passover ahead of him, not a triumphal Passover. The only thing that he is concerned about in the preparation of his entry into Jerusalem is to ride “a colt tied, on which no-one has ever yet sat” (v. 30). This is how Christ brings peace into the world: through meekness and mildness, symbolized by that tethered colt, on which no-one had ever sat. No-one, because God’s way of doing things is different to that of the world. Indeed, just before Passover, Jesus explains to the disciples, “Peace I leave with you; my peace I give to you; not as the world gives do I give to you” (Jn 14:27). They are two different approaches: the way the world gives us peace, and the way God gives us peace. They are different.

The peace Jesus gives to us at Easter is not the peace that follows the strategies of the world, which believes it can obtain it through force, by conquest and with various forms of imposition. This peace, in reality, is only an interval between wars: we are well aware of this. The peace of the Lord follows the way of meekness and the cross: it is taking responsibility for others. Indeed, Christ took on himself our evil, sin and death. He took all of this upon himself. In this way he freed us. He paid for us. His peace is not the fruit of some compromise, but rather is born of self-giving. This meek and courageous peace, though, is difficult to accept. In fact, the crowd who exalted Jesus is the same that a few days later will shout, “Crucify him!” and, fearful and disappointed, will not lift a finger for him [...]