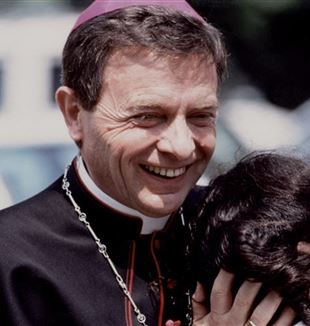 "The weight of the eternal weighs upon every instant,” wrote Ada Negri. Summarized in this brief phrase is perhaps all the essence of the life of Monsignor Eugenio Corecco, a figure of rare humanity and vitality to whom we owe, among other things, the beginning of the adventure of Communion and Liberation in Switzerland in the 1960s.
Theologian, Bishop of Lugano, close friend of John Paul II, Fr. Luigi Giussani, and also honored with the esteem of Joseph Ratzinger; during his short life, to the Church and his friends, he gave witness to a joy and gladness that made him capable of going to the bottom of everything: friendships, studies in canon law, pastoral care, theology, companionship to young people.
In January 1994, Fr. Giussani went to Lugano to say goodbye to him; Corecco had been seriously ill for two years, he knew his illness had returned and it was perhaps one of the last times he would see his friend. With his voice broken by emotion, the Bishop whispers to his friend: "Time is short". But, as Fr. Giussani would note some time later, his face was happy. That year, the Exercises of the Fraternity of CL were entitled "Time is short", to emphasize the urgency of not wasting time and that to offer it, rather, is the only task to which each of us is called: to love God and let ourselves be loved by Him.
It is to this extraordinary and still little-known figure that the biography Eugenio Corecco. La grazia di una vita [Eugenio Corecco. The grace of a life] is dedicated. Written by historian Antonietta Moretti, with a preface by Cardinal Angelo Scola, who was a great friend of Bishop Corecco, the book will be presented on March 25, at 6:30 p.m. on the YouTube channel of the Centro culturale della Svizzera italiana.

In 1966, Fr. Eugenio Corecco invited Fr. Giussani to hold Spiritual Exercises for a group of students from Ticino. Where did that invitation come from? What human and spiritual harmony linked these two great priests?
The encounter between the two has a very deep root and can be traced back to Corecco's own experience of faith. He was born with a happy temperament; since he was a child, he was interested in everything, he was curious and open to reality. It was clear to him that he wanted to become a priest. In this vocation, in fact, he sensed the promise of a fullness of life. After his studies in Rome and a brief experience as a parish priest in Valle Leventina (Ticino), he began to study Canon Law. At the same time, he was asked by the Bishop at that time to follow the young university students of Ticino. Attending to them, he realized that many - too many - did not know much about Christian life, and he discovered a great ignorance about faith understood as life. This dramatic perception met with the restlessness of some of the more attentive and alert young people – it was the 1960s, the intense and confusing years of the Council - who were looking for a change because traditional Catholic associationism was no longer enough. It was at this time that Corecco read an article about Giussani in a weekly magazine. And he simply went looking for him. He realized that this man lived his own experience, responded to his own desire and knew how to communicate it. So he attended a GS retreat in Varigotti; he flooded Giussani with questions and then invited him in 1966 to preach the spiritual retreat to the young people of the Catholic Student Association of Ticino. It was from that invitation, and from what would happen later, that the first nucleus of the future CL community in Ticino and Switzerland was born.

For Corecco, however, the friendship with Fr. Giussani was above all a friendship that continually regenerated both of them on a more intimate and personal level...
Yes, Corecco was transformed by encountering him, because he sensed that this way of living Christianity could affect his way of being a priest, of facing his studies, of deepening the subject that the bishop had asked him to study (canon law), and it affected his whole person. Fr. Eugenio lived the reality of the movement deeply: he lived it by totally compromising his life with the circumstances and the people, often very different, that the Lord put before him. For this reason, when in 1969 he became a professor at the University of Fribourg, he continued to take an active interest in the first young people who followed Fr. Giussani, who studied there and decided to live together. After a few years, he too went to live with the students. The house "of rue Gambach" was born, where, among other things, he received approval for some young men of CL, who verified the priestly vocation, to begin their formation there, attending the Faculty of Theology of Fribourg. All this stemmed from the fact that for him the community experience of the movement was something that the whole Church needed, that every man needed in order to find a home. The heart of CL's experience was - and is - this community experience, the new relationships that the experience of the movement posed and poses in people's lives. In other words, a communion. And this totally fascinated the future Bishop of Lugano.

Reflection upon the theme of communion was also central to his studies of canon law. What impact did they have upon the Catholic Church?
The concept of "communio" is also decisive from a juridical point of view. The Church gave itself a first Code of Canon Law in 1917, a Code that was an imitation of the civil law Codes. Corecco sensed that this was not enough, because the life of the Church and therefore its law cannot be reduced to legislative norms where justice and law are understood as in civil codes. If the Church is communion then - this is his reflection - its laws cannot spring from civil law but start from another dynamic, from something that the Lord Himself continually generates as a relationship between those who follow him. Communion. This intuition gave impetus to a very interesting debate to define these rules with potentially great usefulness for civil law. The reform of the now aging Code of Canon Law was the third and final step that St. John XXIII had in mind when he called the Second Vatican Council. Once the Council concluded, the reflection of canonists began, who had to incorporate the Council's ecclesiology into a new code. The School of Munich, where Corecco was trained, contributed, centered on the concept of communio; Fr. Eugenio was called to the commission that worked with John Paul II on the final draft of the Code promulgated in 1983. Corecco's most profound intuitions encountered obstacles, yet they are still valid today: it is enough to see what happens with the unnecessary expansion of rights whereby any desire is transformed into a right, but to the detriment of the rights of the weakest and most fragile. The vigor with which he defended the communal nature of the Church stemmed from his encounter with the movement and the fact that the movement was his life. 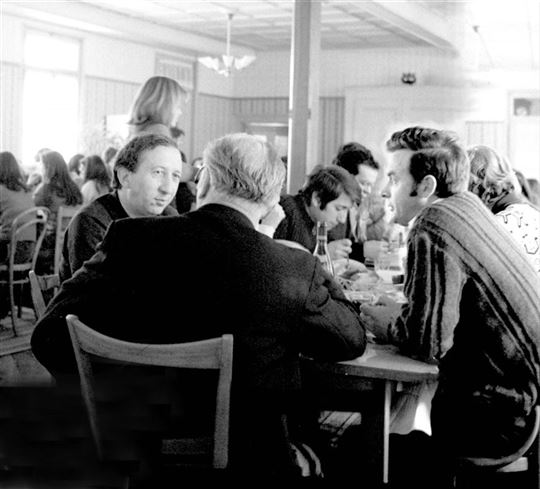 His deep harmony with John Paul II was also decisive for his life.
It was Wojtyla who wanted him to become Bishop of Lugano in 1986. They had met during the work for the reform of the Code and were linked by a rare and deep friendship. The Pope understood that movements were a gift of the Church and not a disturbing element, as others believed. So he paved the way for these new realities, entrusting them with an evangelizing mission that greatly comforted Fr. Giussani and Corecco, who was extremely present at the synods in 1987 and 1990, as a young bishop. The 1987 Synod on the laity is something beautiful to remember. On that occasion, Corecco spoke about charisms, emphasizing how charism is a particular gift given to some and not to all. In his long friendship with Giussani, even in moments of disagreement, the Bishop of Lugano always recognized that the charism was a gift given by the Spirit to the priest from Brianza and for this reason it had to be followed. He was clear to him that unity was given by following the charism and, through that, the Lord.

Those were extraordinary years, when Corecco met figures like von Balthasar and Ratzinger...
It was the 1970s, the post-conciliar Church was in turmoil. Angelo Scola, then a young priest and student of theology at the University of Freiburg, learned that Joseph Ratzinger, Hans Urs von Balthasar and Henri De Lubac wanted to create a new theological journal. He told Corecco about it and they decided to make themselves available to collaborate. They heard from von Balthasar who referred them to Ratzinger. Thus the journal Communio was born, an Italian edition published by Jaca Book. In those years a very long relationship of collaboration began with them and with other theologians, gathered around the discovery of the Church as communion. Both von Balthasar and Ratzinger were fascinated by the extreme liveliness of CL and in a certain sense Corecco and Scola were "the bridge" between the future Pope and Fr. Giussani's movement.

Read also - Moved by the Infinite

The rich and beautiful biography devotes ample space to the years of Corecco's illness, from which he died in 1995 at only 64 years old. Why?
Because they were fruitful years, the fruits of which can still be seen today. Corecco fell ill in the summer of 1992: back surgery, followed by a course of treatment. 1993 was almost a year of remission, but in December the disease came back to hit hard, metastases formed. The following year was a via crucis of operations, therapies, hospitalizations, but the Bishop continued to work and to ask God for the miracle of healing. Works had recently begun, like the Faculty of Theology in Lugano and a promising movement of young people of Catholic Action, and he feared that he would not be able to consolidate them and so did not feel guilty in asking the Lord with insistence to allow him to live. The doctor who cared for him, who for all that time had noted Corecco's journey, remembers February 14, 1995 as the date of the decisive passage, in which the Bishop of Lugano would say "how easy it is" to abandon himself to His will, to remain bound to His will. The life of this young Bishop gave rise to men in love with Christ and the Church, it generated and still generates a liveliness in the many areas that he touched and "lived". It was and is a gift for which we will never cease to give thanks. The possibility of writing his biography was also a gift. As always during any research, there have been difficult moments, dry spells, but I said to myself: if he has been able to live all this, dryness and difficulties included, I can definitely write.