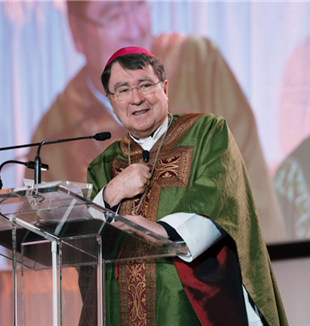 My Dear Friends in Christ,

I am delighted to be here with you again this year at the New York Encounter, as we celebrate the 6th Sunday in Ordinary Time and commemorate the fifteenth anniversary of the passing of Luigi Giussani. As the Apostolic Nuncio, the representative of the Holy Father to the United States, I greet you warmly in the name of the Holy Father, assuring you of his prayers, spiritual closeness, and paternal affection.

Prior to my arrival, I was struck by the theme “Crossing the Divide,” for it seems that our world is coming to be dominated by ideologies. People engage those with whom they agree and demonize those with whom they disagree. Claiming to love justice, they are becoming progressively intolerant of others’ views. The Holy Father speaks daily of mercy, yet paradoxically we are descending into a culture of condemnation and judgment. How can we cross the divide which seems so great?

This year’s poster contained a quotation from Canto XXXIV of Dante’s Inferno, but before I read that quotation, I want to read you one from the beginning of the same Canto, which might capture the bleakness of our world:

As, when a heavy fog is breathed abroad, or when at night our hemisphere grows dark, a windmill looks when seen from far away; even such a structure seemed I now to see; then, for the wind, I shrank behind my Leader, for other shelter was there none.

Our world seems bleak, dark, like a fog, even hellish at times. Under the guidance of his leader, Dante then encountered Lucifer, Brutus and Cassius, and the one who suffers the most – Judas Iscariot, who betrayed Jesus with a kiss. Despite these horrors, Dante’s guide urges him on:

“Stand up” my Teacher said, “upon thy feet! the way is long and difficult the road, and now to middle-tierce the sun returns.”

Our road too is long and difficult, but with our Leader, we can cross the divide, but we should not expect it to be easy. Finally, after going through a passageway, Dante writes (and this is what appeared on the poster):

My Leader then, and I, in order to regain the world of light, entered upon that dark and hidden path; and, without caring for rest, we climbed up, he first and I behind him, far enough to see, through a round opening, a few of those fair things the heavens bear. Then we came forth, to see again the stars.

We too have our Leader, Jesus. In the fifth chapter of Matthew’s Gospel, Jesus ascends the mountain, just as Moses ascended Mount Sinai to receive the Law. Jesus sat down, assuming a magisterial position, and began to teach the crowds. He was establishing Himself as the New Moses. He then began his great Sermon on the Mount with the Beatitudes. If we are to cross the divide, then perhaps, the spirituality of the Beatitudes, including poverty of spirit, meekness, mercy, and enduring persecution joyfully, should be part of the solution. Jesus wanted to make known to His followers the demands of discipleship, while encouraging them to be salt of the earth and light of the world. Certainly, amid the darkness of the ideologies of our day, we are called to do that. But how?

A starting point is keeping the commandments. Jesus told His disciples that He had not come to abolish the law, but to fulfill it, adding immediately that unless your righteousness (justice) exceeds that of the scribes and Pharisees, you shall not enter the Kingdom of God. We cannot carry on like the Scribes and Pharisees did, or as the poster says, “We say we love justice, but use it as a weapon against our enemies.”

To be an authentic disciple demands something more. Jesus then begins the so-called “anti-theses.” In today’s Gospel, we have the first four of six anti-theses., which have a characteristic form. Jesus begins by saying, “You have heard that it was said to men of old.” This “You have heard” is directed not simply to an individual but to a whole community. We have heard the Law through the Scriptures. The “That it was said” is a linguistic use in Greek and Hebrew of the divine passive voice; thus, it means to say, “God said.” The “to men of old” or “to our ancestors” refers to the Israelites who received the old Law from Moses on Mount Sinai.

The characteristic form continues with Jesus saying, “But I say to you...” Jesus imposes His teaching authority over and above that of Moses. This form of argumentation was used commonly by the rabbis of Jesus’ time. An interpretation of one rabbi was contradicted by a “but I say to you.” Jesus shows Himself to be a rabbi by the use of this form, but no mere rabbi would have claimed the authority, to go beyond what Moses had taught or to even revoke Mosaic Law.

Jesus, in using this form, is claiming the authority of the Teacher par excellence. He is claiming to be God’s Authoritative Word, the authentic norm for Christian morality. It is this Word that comes to us in these six “Anti-theses”. It is not that Jesus has come to abolish the law and the prophets; He has come rather to fulfill it and to call his disciples to a deeper love than what the Mosaic Law requires.

The first anti-thesis deals with relationships between human beings, between members of the community. It utilizes the Greek adelphos (brother) four times. It begins by citing the Fifth Commandment: You shall not kill, but Jesus adds to the Law. Jesus tells us that we shall not grow angry, not hurl insults, or call our brother or sister names. Jesus does not revoke the law against homicide, but He challenges his disciples. It is not enough to merely avoid killing one another. Jesus passes to the Spirit of the Law. What must be purged in the Christian disciple are hate, wrath, insults, abusive language and the like. External avoidance of murder is not enough; Jesus demands an interior change.

We heard in verses 23 and 24 an illustration of how this interior change manifests itself in action: in reconciliation. To avoid anger, there is a need for reconciliation. Offering sacrifice becomes meaningless without reconciliation, especially among members of the community. It would have been unthinkable to interrupt temple liturgy for some frivolous reason, yet Jesus’ emphasis on leaving the gift at the altar highlights the importance of reconciliation. Reconciliation is a pre-requisite for authentic worship; true sacrifice or oblation is impossible without it. Our worship of God is contingent upon our love of neighbor. Being pro-active as instruments of reconciliation is one way of crossing the divide.

The same interior change is demanded in the next anti-thesis which speaks of adultery. Jesus demands that His disciples not look upon each other with lust, as if a person was an object to be dominated or controlled; rather, He desires an interior change which shows respect for each person in his or her richness. In each case, whether it is strengthening the teaching on divorce or in encouraging the disciples not to take oaths, Jesus wants an interior change – deeper commitment to relationships and a more profound sense of trust in the community. These are the ingredients that form the recipe for “crossing the divide.”

The six anti-theses conclude (and we will hear them next week) with Jesus saying, “You have heard that it was said, `You shall love your neighbor and hate your enemy.' But I say to you, love your enemies and pray for those who persecute you… For if you love those who love you, what reward have you? Do not even the tax collectors do the same? And if you salute only your brethren, what more are you doing than others? Do not even the Gentiles do the same? You, therefore, must be perfect, as your heavenly Father is perfect”.

Fr. Giussani reflected on the true divide that must be crossed. We are far from perfect. Hearing these challenging verses and seeing the way we have been living causes us to acknowledge that we are much more like Judas, betraying the Lord with a kiss, pledging one thing with our lips and doing another. There is a great abyss between word and deed; between our desire for perfection and the actual state of our relationship with God.

How do we cross that divide? How do we keep these laws? How do we exceed the righteousness of the Scribes and Pharisees? Giussani asks, “Who has brought us the law?” Answering his own question, he writes:

“He who has brought us the law is Christ; that is, Christ is the visible, tangible, followable, imitable Mystery of the Father. Be perfect like the Father. But for the Father, what is the center of everything, that explains everything, in which all things have their perfection? It is Christ. The Father has given all things into His hands (cf. Jn 3:35). Therefore, to be perfect like the Father means recognizing, accepting and embracing Christ. … To be perfect like the Father is to recognize, accept, and embrace the order with which He has made all things, men and things; the order, the Kingdom of God. But this Kingdom of God, this order of things has a name. It is called Christ!” (Una strana compagnia, Milano: BUR Rizzoli, 2017, 231)

Although he died fifteen years ago, Fr. Giussani remains a father to us – to this movement. He calls us to be children of the heavenly Father by recognizing, welcoming, embracing, and living as much as possible His Presence, just as a child lives attached to his mother, with the thought of his mother always in the background, so must Christ always be in our thoughts and alive in our conscience, calling us to perfection. The way to cross the divide is to be aware at all times of His Presence. God is not far away. He is near. He is our companion each day. He is the Way we cross the divide. Christ is the Way.#FrGiussani