"What do I take home from this synod? The image of us, bishops, and lay people united around the Pope. As happened at the first Council of Jerusalem: the apostles and Saint Peter invoked the Holy Spirit to seek new paths". Monsignor Filippo Santoro, Archbishop of Taranto, thus summarizes the three weeks spent at the Synod dedicated to the Amazon, to which he was invited by virtue of his 27 years as fidei donum in Brazil, where he was auxiliary of Rio de Janeiro and bishop of Petrópolis. "It was nice to see how the Pope was attentive, listened, participated... At a certain point, whilst he spoke of the characteristics that a priest must have, he said: "We need something that overflows."" But Monsignor Santoro's gaze is not just that of someone who has got to know Brazil, and the Amazon, well, but also that of a pastor who, in a European city like Taranto, is directly confronted with the challenges of ecology that this Synod has raised strongly.

Monsignor Santoro, what’s your analysis of these three weeks?
It was a great moment to listen. Only such an attitude helps us understand, in depth, the reasons for the environmental situation in the Amazon and the worldview of the peoples who live there. It was an occasion to hear cry that comes from there and that should also shake us, should wake us up. Because the violence taking place against the environmental resources also becomes an act of aggression against people. Another aspect that was developed was the understanding of the culture of these peoples, from which our Western mentality has much to learn: we accumulate things, they accumulate relationships with nature and with people. Finally, there was a discussion on the life of the Church and on the "new paths" to follow. Another topic that was discussed was that of inculturation, a classic topic of missionary dimension.

In what terms was inculturation discussed?
In addition to listening to the Amazonian cultures, we also reflected on the contribution that the Gospel makes to these cultures. They are undoubtedly very rich, but there are also elements that must be purified. The right emphasis that must be given to the value of these cultures, much highlighted in this Synod, cannot make us forget the novelty of the Gospel that allows us to value the semina Verbi, the seeds of the Word already present in them, to and bring them to their fullness. These people also have original sin; the Gospel saves and brings to completion the different realities it encounters.

What kind of stress did the Pope give to the work done?
In his initial speech, the Pope said that pastoral and ecological challenges are the first to be prioritized. Our gaze, he explained, must be that of the disciples and of missionaries. In other words, the themes dealt with had to be considered from the perspective of faith. Then, in the lectures, particular points were emphasised on, from the valorization of the vision of the Amazonian world to the claim of specific ministries in the life of Christian communities. 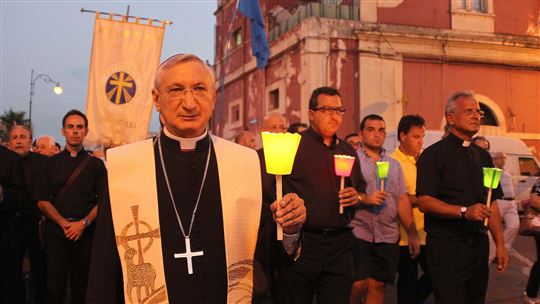 The so-called viri probati and the introduction of the female diaconate.
Yes, the latter was requested several times in the interventions of bishops and auditors.

Both are mentioned in the final document.
The female deaconate has, in fact, been blocked. The Pope had created a commission to study the subject which, however, ran aground because of a lack of documentation on the historical basis of an institution of this kind. It is mentioned in the New Testament, but they were women who would help the faithful, to be baptized in the river, to dress.It was a service, but it does not correspond to the nature of the deaconate as it was then configured as part of the sacrament of Orders. The final document of the Synod says that the auditors. Wanted to share their experiences and reflections with the Commission and await the results. That is it. As for the viri probati, however, there’s a profound change from the intial expectations.

What do you mean?
Due to a lack of access to the Eucharist in different Amazonian communities (in some regions the faithful remain without the Eucharist for one or two years), it was expected that ordination would be opened to married men, preferably indigenous. The final document, point 111, proposed to establish the criteria for the ordination of permanent deacons with an already stable family. Added to this is the observation that this is a subject of such importance that it should also be discussed in a general Synod involving the whole Church. That is: the topic cannot be resolved by only discussing it in a regional Synod. In any case, it is an exception in the face of a serious need, not a new norm. The issue of priests’ celibacy was not touched. The press has not been helpful with regards to this. And the Pope seemed annoyed by the fact that too much importance was given to intra-ecclesiastical politics, which he considers marginal with respect to the great problem of the cry that rises from the Amazon. The main theme was: the destruction of this region and, more importantly, the destruction of the peoples who live there.

You have been a rapporteur for one of the smaller circles. In the summary of your document it says that, with regard to the lack of priests in the region, it is necessary to ask oneself what the origin of the phenomenon is, even before seeking solutions. Yes, in fact, may comments on this topic stopped at the analysis of its effects. Instead, we should ask ourselves why there are so few vocations to the priesthood, why is there no enthusiasm to give one’s life totally to Christ. For me, the point is that living communities can be born, in which the proclamation of Christ is experienced as a present salvation, a present peace, a fullness of life. It is thus that beautiful vocations to marriage are born, but also to the prophetic form that is Christian virginity. This is what the Pope said in the Angelus on Sunday: it is the newness of the Gospel that renews all cultures. The Gospel does not identify itself with any of these expressions, but renews them all. "There is no standard culture, there is no pure culture, that purifies the others; there’s the Gospel, pure, that is inculturated". What is essential is the proclamation of this newness to the ends of the earth, through the testimony of life.

READ ALSO - Pope Francis: “To look at reality in a different way, accepting it with open arms as a gift"

As Bishop of Taranto, what did you learn from the Synod on the Amazon?
There was talk of an “ecological debt" to the Amazon. This is true also fro Taranto. Its large steel industry has given work to many people but, at the same time, pollution has caused many deaths, even of children. This problem must be resolved through a specific investment for the protection of the environment. I’ve said this to the new buyer of ILVA (steelworks company): stop environmental devastation immediately. On the other hand, I am in favour of moving towards decarbonisation and alternative forms of energy. But if this transition is made too quickly then 4-5 thousand people will remain unemployed. We need to proceed with a broad outlook, which takes into account both the environmental problem and the problem of unemployment. It’s the idea of integral ecology, which does not separate the environment from the man who lives there. Thus, the cry of the Amazon is also heard in Taranto and challenges us closely. I have also brought Taranto the urgency and beauty of proclaiming the resurrection of Christ, our hope even in the most critical situations.