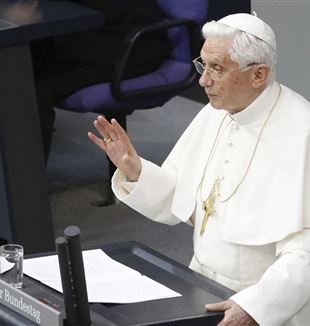 For the occasion of the Synod for the Amazon, we propose extracts from the addresses of the last three Pontiffs on the ecology and protection of the "common house", among the key themes of the Extraordinary Assembly of Bishops that opened on 6 October. From the Redemptor hominis, to the Laudato si', to the Bundestag speech, the Church's gaze on climate change, the exploitation of natural resources, and models of development: "a challenge of civilization" that, at its root, concerns the dignity of man and "the meaning of our earthly sojourn”.


"The man of today seems ever to be under threat from what he produces, that is to say from the result of the work of his hands and, even more so, of the work of his intellect and the tendencies of his will. This gives rise to a question: Why is it that the power given to man from the beginning by which he was to subdue the earth turns against himself? Man often seems to see no other meaning in his natural environment than what serves for immediate use and consumption. Yet it was the Creator's will that man should communicate with nature as an intelligent and noble "master" and "guardian", and not as a heedless "exploiter" and "destroyer"."
Read John Paul II’s encyclical letter, Redemptor Hominis (1979)

"The moral character of development exclude respect for the beings which constitute the natural world, which the ancient Greeks - alluding precisely to the order which distinguishes it - called the "cosmos." One cannot use with impunity the different categories of beings, whether living or inanimate - animals, plants, the natural elements - simply as one wishes, according to one s own economic needs. On the contrary, one must take into account the nature of each being and of its mutual connection in an ordered system, which is precisely the cosmos."
Read John Paul II’s Sollicitudo Rei Socialis (1987) 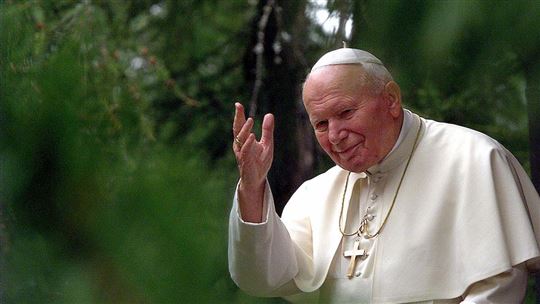 "In our day, there is a growing awareness that world peace is threatened not only by the arms race, regional conflicts and continued injustices among peoples and nations, but also by a lack of due respect for nature, by the plundering of natural resources and by a progressive decline in the quality of life.
Faced with the widespread destruction of the environment, people everywhere are coming to understand that we cannot continue to use the goods of the earth as we have in the past. The public in general as well as political leaders are concerned about this problem, and experts from a wide range of disciplines are studying its causes. Moreover, a new ecological awareness is beginning to emerge which, rather than being downplayed, ought to be encouraged to develop into concrete programmes and initiatives."
Read John Paul II’s Message for the XXIII World Day of Peace (1990)

"At the root of the senseless destruction of the natural environment lies an anthropological error, which unfortunately is widespread in our day. Man, who discovers his capacity to transform and in a certain sense create the world through his own work, forgets that this is always based on God's prior and original gift of the things that are. Man thinks that he can make arbitrary use of the earth, subjecting it without restraint to his will, as though it did not have its own requisites and a prior God-given purpose, which man can indeed develop but must not betray. Instead of carrying out his role as a co-operator with God in the work of creation, man sets himself up in place of God and thus ends up provoking a rebellion on the part of nature, which is more tyrannized than governed by him.
It is not merely a matter of "giving from one's surplus", but of helping entire peoples which are presently excluded or marginalized to enter into the sphere of economic and human development. For this to happen, it is not enough to draw on the surplus goods which in fact our world abundantly produces; it requires above all a change of life-styles, of models of production and consumption, and of the established structures of power which today govern societies."
Read John Paul II’s encyclical letter Centesimus Annus (1991)

"We must therefore encourage and support the "ecological conversion" which in recent decades has made humanity more sensitive to the catastrophe to which it has been heading. Man is no longer the Creator's "steward", but an autonomous despot, who is finally beginning to understand that he must stop at the edge of the abyss.
At stake, then, is not only a "physical" ecology that is concerned to safeguard the habitat of the various living beings, but also a "human" ecology which makes the existence of creatures more dignified, by protecting the fundamental good of life in all its manifestations and by preparing for future generations an environment more in conformity with the Creator's plan."
Read John Paul II’s General Audience (17 January 2001) 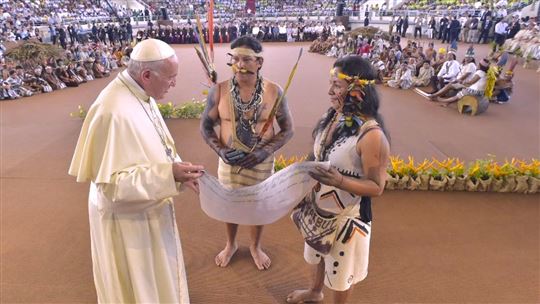 "Among the key issues, how can we not think of the millions of people, especially women and children, who lack water, food, or shelter? The worsening scandal of hunger is unacceptable in a world which has the resources, the knowledge, and the means available to bring it to an end. It impels us to change our way of life, it reminds us of the urgent need to eliminate the structural causes of global economic dysfunction and to correct models of growth that seem incapable of guaranteeing respect for the environment and for integral human development, both now and in the future."
Read Benedict XVI’s Address to the Diplomatic Corps accredited to the Holy See (2007)

"Today the subject of development is also closely related to the duties arising from our relationship to the natural environment. The environment is God's gift to everyone, and in our use of it we have a responsibility towards the poor, towards future generations and towards humanity as a whole. When nature, including the human being, is viewed as the result of mere chance or evolutionary determinism, our sense of responsibility wanes.
The way humanity treats the environment influences the way it treats itself, and vice versa. This invites contemporary society to a serious review of its life-style, which, in many parts of the world, is prone to hedonism and consumerism, regardless of their harmful consequences."
Read Benedict XVI’s encyclical letter Caritas in veritate (2009)

"The importance of ecology is no longer disputed. We must listen to the language of nature and we must answer accordingly. Yet I would like to underline a point that seems to me to be neglected, today as in the past: there is also an ecology of man. Man too has a nature that he must respect and that he cannot manipulate at will. Man is not merely self-creating freedom. Man does not create himself. He is intellect and will, but he is also nature, and his will is rightly ordered if he respects his nature, listens to it and accepts himself for who he is, as one who did not create himself. In this way, and in no other, is true human freedom fulfilled."
Read Benedict XVI’s Address to the Deutscher Bundestag (2011)

"While the earnings of a minority are growing exponentially, so too is the gap separating the majority from the prosperity enjoyed by those happy few. This imbalance is the result of ideologies which defend the absolute autonomy of the marketplace and financial speculation. Consequently, they reject the right of states, charged with vigilance for the common good, to exercise any form of control. A new tyranny is thus born, invisible and often virtual, which unilaterally and relentlessly imposes its own laws and rules.
In this system, which tends to devour everything which stands in the way of increased profits, whatever is fragile, like the environment, is defenseless before the interests of a deified market, which become the only rule.
What is called for is an evangelization capable of shedding light on these new ways of relating to God, to others and to the world around us, and inspiring essential values".
Read Francis’ Apostolic Exhortation Evangelii Gaudium (2013)

“The external deserts in the world are growing, because the internal deserts have become so vast”. For this reason, the ecological crisis is also a summons to profound interior conversion. It must be said that some committed and prayerful Christians, with the excuse of realism and pragmatism, tend to ridicule expressions of concern for the environment. Others are passive; they choose not to change their habits and thus become inconsistent. So what they all need is an “ecological conversion”, whereby the effects of their encounter with Jesus Christ become evident in their relationship with the world around them. Living our vocation to be protectors of God’s handiwork is essential to a life of virtue; it is not an optional or a secondary aspect of our Christian experience. We need to see that what is at stake is our own dignity. Leaving an inhabitable planet to future generations is, first and foremost, up to us. The issue is one which dramatically affects us, for it has to do with the ultimate meaning of our earthly sojourn."
Read Francis’ encyclical letter Laudato si’ (2015)

The problem of climate change is related to issues of ethics, equity and social justice. The current situation of environmental degradation is linked to the human, ethical and social degradation that we experience every day. And this forces us to think about the meaning of our models of consumption and production, and the processes of education and awareness, to make them consistent with human dignity. We are facing a “challenge of civilisation” in favour of the common good. And this is clear, just as it is clear that we have a multiplicity of solutions that are within everyone’s reach, if we adopt on a personal and social level a lifestyle that embodies honesty, courage and responsibility.
Read the text of Francis’ Video message to participants at the UN Climate Action Summit (2019)