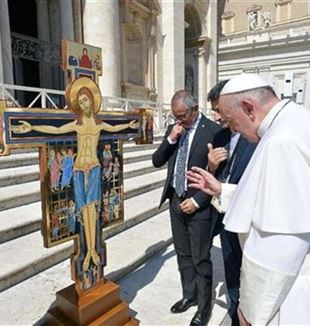 "Courage, because you are in God’s heart, you are precious in His eyes and, even if you feel lost and unworthy, do not lose heart.” Pope Francis’ words are like a caress upon the faces of the prisoners, even if they cannot hear him as he utters them. Last Saturday, in St. Peter’s Square, Bergoglio offered a lesson in humanity to prison police officers, prison administration staff, chaplains and volunteers working in prisons: 11,000 people from all over Italy.

The Pope condemns the serious problems that weigh upon on this world. He stressed the danger that prisons might become "dustbins of rage", due to precarious living conditions and overcrowding (60,000 people compared to a capacity of 50,000 places). He asks that "the punishment does not compromise the right to hope, that prospects of reconciliation and reintegration are guaranteed". And he reiterates, as he has done on other occasions, that "life imprisonment is not the solution to problems, but a problem to be solved. Because if hope is locked up, there is no future for society. Never deprive yourself of the right to start over!". 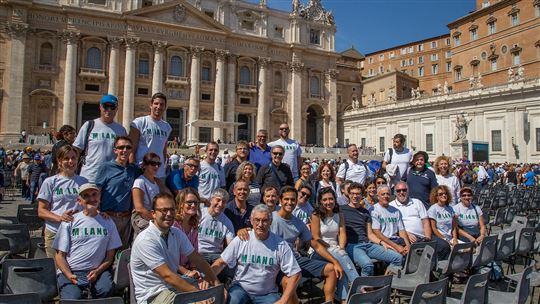 His condemnation of the degradation of the prison system is accompanied by three key words. He says “thank you” to the prison police and administrative staff for their "hidden work, often difficult and unsatisfying, but essential". When, “in addition to being guardians of security, you are a close presence for those who have been ensnared inthe nets of evil, you become builders of the future: you lay the foundations for a more respectful coexistence and therefore for a safer society. In so doing, you become, day after day, weavers of justice and hope.”

His second term - "keep going" - is addressed to chaplains, nuns, religious men and women and volunteers. He reminds them that Jesus, seeing Zacchaeus, did not stop at the prejudices again a publican, accused of injustice and robbery, fed by "those who believe that the Gospel is intended for ‘good people’. On the contrary, the Gospel asks us to get our hands dirty". The Pope exhorts us to be "tireless seekers of what is lost, heralds of the certainty that each person is precious for God".

As he utters these words, the minds of the hundred volunteers there at St. Peter’s, from the association “Incontro e Presenza” [Encounter and Presence], are filled with the names and faces of the prisoners they have met in these last years, in the Milanese penitentiaries- San Vittore, Bollate, Opera - the friendships born, their encounter with precarious beings,the discovery that man is not characterized by his mistakes and that the greatest gift for those who feel lost and hopeless is the embrace of God’s mercy. During the meeting, the Pope blesses the Cross of Mercy, created by the prisoners of Paliano (Frosinone), where Francis had celebrated Maundy Thursday in 2017. The cross will travel around Italian prisons in a sort of pilgrimage of hope.

His third word, "courage"- Bergoglio addresses these words to the prisoners: "Have courage, because you are in God’s heart, you are precious in his eyes ... Never let yourselves be imprisoned in the dark cell of a hopeless heart, do not give in to resignation. God is greater than any problem and is waiting for you to love you. Stand before the Crucified One, before the gaze of Jesus. From there, from the humble courage of those who do not lie to themselves, peace is reborn; the confidence of being loved and the strength to move forward blossom again. Courage, never suffocate the flame of hope. Always look towards the horizon of the future: there is always a future of hope, always".

Hope is the necessary resource for those who, day after day, have to deal with the pain of their mistakes and the evil committed, angry because of a sentence they believe they do not deserve, enduring their sentence by living in precarious conditions. The director of the Acireale juvenile prison also reminded of this; she asked Francis to pray so that she and her colleagues are able to support the journey of Stefan, Michael, Ibrahim, Emanuele, Federico, Alexander... She recalls their names, each and every one, her boys, who "regardless of their beliefs, see in you a Holy Father that, in his words and deeds, is sympathetic to the weakest".

The square is filled by the testimonies of prison police officers, prison directors, chaplains: people who spend every day of their lives in the "social landfills", in which, we delude ourselves in believing, we can dispose of what we believe to be human waste, that we would prefer not to see. “But Christ is among them, and no cell is so isolated that it prevents Him from restoring hope and generating new people," warns an inspector. The prison is a great school of humanity. And last Saturday, in St. Peter’s square, a lesson was given by a great teacher.
#PopeFrancis