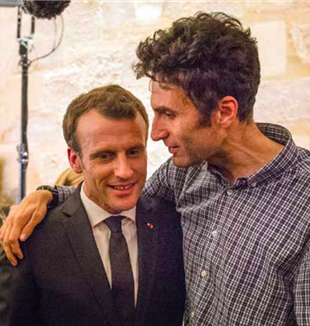 In coming here this evening, Your Excellency, we, you and I, have braved skepticism from all sides. And if we have done this, without doubt it is because we share the vague sense that the link between State and Church has deteriorated and we–both of us–are interested in recovering it. We can reach this goal only through a dialogue in truth. This dialogue is indispensable and, from my point of view, I would say that a Church that would not be interested in temporal questions would not be living up to its vocation; and that a President of the Republic who claimed to be disinterested in the Church and in Catholics would not be living up to his duty.

The example of Colonel Beltrame illustrates this point of view in an illuminating way. Many people have tried to single out the secret sources of his heroic gesture: some have seen his acceptance of sacrifice as rooted in his military vocation; others, in the manifestation of a faithfulness to the Republic nourished by his formation; still others, in particular, his wife, have interpreted his act as the expression of his ardent Catholic faith, ready for the supreme test of death. These dimensions are tightly bound together, and it would be impossible and useless to separate them, because this heroic conduct is the truth of a man that reveals itself in all its complexity. But in this country, which does not hold back its distrust of religions, I have not heard any voice in opposition to this evidence that is engraved on the heart of our collective imagination: when the moment of maximum intensity arrives, when the test pushes us to gather all our resources and put them at the service of France, then the part of the citizen and the part of the Catholic burn, as with any true believer, with the same flame. […]

As the Head of State, I am the guarantor of the freedom to believe or not to believe, but I am neither the inventor nor the promotor of a state religion that substitutes the divine transcendence with a Republican creed. If I allow myself to be blinded to the spiritual dimension that Catholics offer in their moral, intellectual, familial, professional, and social life, I would condemn myself to having only a partial vision of France; it would mean ignoring the country, its history, and its citizens, and I would not be living up to my mission because of this indifference. […] Today, in this moment of great social fragility, when the very fabric of the nation risks being cut to ribbons, I consider it part of my responsibility not to let the faith of Catholics in their interaction with politics and politicians be eroded. […] And I cannot permit myself to let this disillusionment get worse. On one side, a part of the political class has undoubtedly exaggerated its attacks on Catholics, for reasons that are too often clearly electoral. […] We have created a vision of community that is in contradiction to the diversity and vitality of the French Church […]. On the other side, we have found all the reasons not to listen to Catholics, relegating them, through suspicion and calculation, to a militant minority that wants to undermine our Republican unanimity. […]

These questions, Your Excellency, […] interest all of France, not because they are Catholic questions, but because they have to do with the idea of man, his destiny, his vocation; they are at the center of our immediate future. They seek to offer a meaning and a support even to all those who do not ask them.

I am here because I want to do justice to these questions. I am also here to ask you solemnly not to feel yourselves at the mercy of the Republic, but to recapture the gusto and the salt of that role which you have always played. […] I am convinced that the Catholic sap must contribute over and over again to keeping our nation alive. […] The Republic expects much from you. In particular, if you will permit me, it is expecting you to give her three gifts: the gift of your wisdom, the gift of your engagement, and the gift of your freedom. The urgent need of our contemporary politics is that of finding its roots in the question of man or, to use the words of Mounier, of the person. In today’s world, we can no longer be satisfied by an economic or scientific progress that does not ask itself questions about its impact on humanity and on the world. […] But it is not possible to advance far along this path without running into Catholicism, which for centuries has patiently explored these questions. It searches them out in its own studies and in dialogue with other religions, giving to these explorations the form of an architecture, of a painting, of a philosophy, of a literary work in which all, in a thousand ways, have sought to express human nature and the meaning of life. “It is venerable because it has known man well,” Pascal says about the Christian religion. And certainly, other religions and other philosophies have also explored the mystery of man. But secularization cannot eliminate the long tradition of Christianity. […]

So, politicians and the Church share this mission of being involved in and molding reality, of coming face to
face every day with the most temporal things. And it is often difficult, complicated, demanding, and imperfect. Solutions do not come by themselves but are the product of the dialogue between reality and a certain type of thought, a conception of the world. These solutions are often the choice of the lesser evil, which is always precarious, difficult, and challenging.