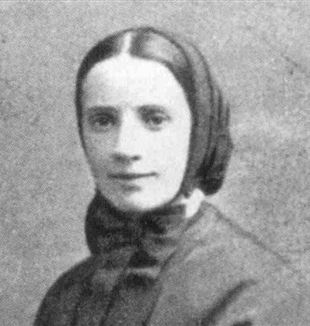 "In recent weeks," reads a June 30, 1889, article in the New York Sun, "women with dark complexions, in the habit of Sisters of Charity have traveled to the Italian neighborhood of Little Italy, climbing up steep and dark stairways, going down into filthy basements, where not even a policeman would dare set foot without backup. At the head of this congregation is Mother Frances Cabrini, a woman with large eyes and an attractive smile. She does not speak English, but she is a woman with purpose."

Frances Cabrini had disembarked only a few months earlier in the American metropolis, together with seven sisters from the order she had founded, the Missionaries of the Sacred Heart of Jesus, and her presence and work had already sparked interest. Who was this sister with a slim face, who in the span of 30 years crossed the Ocean 28 times, founding orphanages, colleges, schools, and hospitals on both sides of the Atlantic? Then as now, what amazes us is above all her presence, that, responding to concrete needs, made the love of Christ visible to man. The last of twelve children, Frances was born on July 15, 1850, in Sant'Angelo Lodigiano, in the plains of Lombardy. At age eleven she had already chosen what she wanted to do in life: be a missionary in China. She had a decisive character, but her health was poor, which caused many religious orders to refuse her request for admission. But a certain Doctor Morini had said about her physical condition, "God helps His saints and then laughs at us."

In 1874, she entered the Hospice of Divine Providence in Codogno, where she became superior, and in 1881 the Bishop of Lodi approved the rule of her order, the Missionaries of the Sacred Heart of Jesus. The first house for young girls opened in Codogno. Elementary schools in Grumello, Milan and Casalpusterlengo soon followed, as did a boarding school in Rome. Still, Frances intended to bring her work to China.

In Rome, Frances met Bishop Giovanni Battista Scalabrini. The Bishop of Piacenza had recently published The Italian Emigration to America, a pamphlet describing the dramatic situation of Italian immigrants in the United States. To assist them, he had sent some priests from the Congregation of Saint Charles Borromeo, which he had founded, but it was not enough. They needed sisters to collaborate with them, above all in the work of education. But when the bishop suggested that Frances might help, she hesitated. She wanted the order to be "free from every material, moral or spiritual bond, and thus independent of everything." Moreover, Frances was a practical woman, and she did not see a particular project in which they could collaborate.

Scalabrini went back to his work, but soon after a request came from the priests in New York. The priests wanted to open a school in the parish of Saint Joachim and were looking for someone to run it. Frances, still hesitant, asked for an audience with Pope Leo XIII to help her decide. The Pontiff understood the situation of the Italian immigrants and above all knew that a real work of de-Christianization was going on there. The immigrants needed people who, with their presence and with their actions, would demonstrate that only Christ, within the experience of the Church, is the way to salvation. Therefore, he told Frances, "Not to the East, Cabrini, but to the West. Your order is still young. It needs resources. Go to the United States, and you'll find them there. And with these resources, you'll find a great field for work. Your China is the United States. There are so many Italian immigrants who need assistance." Frances no longer had any doubts, and she obeyed.

On March 31, 1889, together with 1,500 other immigrants, Frances landed in New York, where she knew nobody. The small band of sisters spent their first night in two dirty rooms in a hotel in Little Italy. Frances did not lose heart in the difficult situation; instead, she saw the hand of God in everything, a new possibility that the Lord gave her to recognize His Presence. 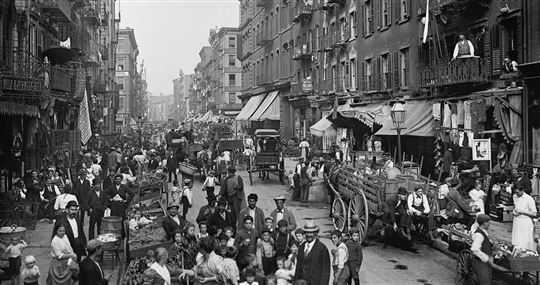 The next day, she began her work. Together with the sisters, she visited families and gathered the children for Catechism class. With the help of the Bishop, who was at first doubtful, she opened an orphanage, then a nursery and a school. And the money? She went door to door asking if people could give money or fruit or vegetables or furniture - everything was useful. In a short time, the immigrants recognized that they could turn to the sisters in times of difficulty. But above all the sisters helped the immigrants recapture a fundamental aspect of their identity: their Catholic faith.

Frances was tireless. She bought buildings and land using loans she secured from various people in New York, including non-Christians and the director of the Metropolitan Museum. No one could resist her. Behind her smile, she had a head for business, because as she had learned, you can be in the grace of God and balance the books. Her presence almost "forced" people to make donations. What moved her was charity, the love of Christ for every man and the desire for Christ to be known. Hers was a charity that makes "the children of God work with more tenacity, prudence and patience, because they have consecrated their energies for the coming of His Kingdom and they run toward an incorruptible reward," as she wrote in a letter. And this made hardened laymen like Filippo Turati say, "We are not from the same parish, but I assure you that I greatly appreciate the work of Cabrini."

Vocations flourished, and her work was requested in other American cities. New Orleans, Seattle, Chicago-everywhere she was called, she went and built orphanages, schools, nurseries, and hospitals. She was an example for her other sisters. She taught them to cook, to clean, to keep the books, and to act with humble people the same as they would with those in high places. After the United States came South America, where there were many Italian immigrants. Frances and her sisters went to Nicaragua, Panama, Brazil, Chile and Argentina, crossing the Andes on mules. There wasn't a moment of rest, and yet she was not frantic or overly anxious to make things happen because, as she said, "if I am only occupied with exterior things, however good they are, I would grow weak and risk losing myself, and I would miss out on the repose of prayer if I did not seek to rest peacefully in the heart of my sweet Jesus. Give me, O Jesus, this mysterious rest in abundance."

This was her strength: the love of Christ. Her travels brought her back to Europe, too, where she founded houses in Spain, France, England and Portugal. During her travels, she emphasized the international quality of her mission and insisted that her sisters learn to spread the Gospel in different languages. She died suddenly on December 22, 1917, in Chicago, seated at her desk.