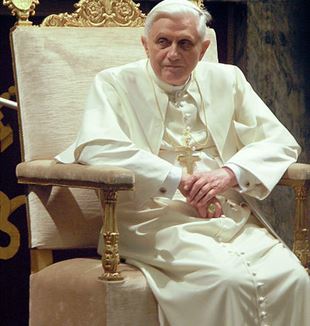 Monday, February 11, 2013. The news travels faster than lightning. Pope Benedict XVI has presented his resignation to a group of Cardinals: “After having repeatedly examined my conscience before God, I have come to the certainty that my strengths, due to an advanced age, are no longer suited to an adequate exercise of the Petrine ministry.” For an instant, the world is paralyzed. We find ourselves before one of those events that leave their mark on life, to the point that each of us remembers very well where he was and what he was doing when the news reached him.

One year after that historic moment, what remains? What did we learn from Benedict XVI’s gesture? We draw the first lesson from the loyalty with which we each place ourselves in front of the experience we had in the moments that followed the news. “Everything was contained in that moment of silence,” wrote Fr. Julián Carrón in la Repubblica a few days later. “No communication strategy could have provoked a similar reaction: we were faced with a fact as incredible as it was real, a fact that imposed itself with such evidence that it drew us all, forcing us to look up from everyday things. What was capable of filling the entire world with silence, all of a sudden?” We found ourselves in front of the unexpected bursting of the Mystery of God into our lives, this time before the eyes of the whole world–the event of God in the person of the witness.

"The Spirit of Christ cannot be seen. But we see the freedom that He generates."
A NEW PRIMACY. The Pope’s gesture, which violated the customs and conventions of great statesmen (ecclesiastics included), placed a new factor before all of our eyes–a factor that we, admittedly, do not usually bother with, closed in our cerebral analyses and preoccupied with not missing a single fact. In reality, the Pope affirmed the factor par excellence, the one without which life has no purpose: the Mystery of God who created us, who sustains us, and who revealed His good face in Jesus Christ.

And that new factor, “the stone the builders rejected [that] has become the cornerstone” (from Psalm 118), entered into the world through a gesture of unthinkable freedom, which forced us to stop and look up. “Full of wonder,” continued Carrón in that same article, “I was then forced to shift my gaze to what made it possible: Who are You, who fascinate a man to the point of making him so free that he provokes the desire for the same freedom in us, too?” The Spirit of the risen Christ, who governs the world, cannot be seen. But we can see the freedom that He generates, and through it we can recognize Him: “Where the Spirit of the Lord is, there is freedom,” as St. Paul taught us. And this freedom is one of the unmistakable signs of His Presence, in which the moral heart grasps the sign of the Presence of its Lord.

ADMIRATION. Pedro J. Ramírez, editor of the newspaper El Mundo and one of the most important Spanish columnists, said to his readers at that time: “For several days now, I have been asking myself why the Pope’s resignation is causing a growing disquiet in me, even though I am not a practicing Catholic and, in the way of beliefs, my critical spirit almost always gets the better of the comfortable patrimony of a placatory religious education. Yes, it was big news, but after having lived a lot of big news on the front lines, why do I feel much more captivated by the head of the Church’s step back than by Obama’s election and reelection, the political scandals (…), and even the economic situation that has us all hanging by a thread? (…) Bit by bit, admiration appeared for a gesture overflowing with lucidity and a sense of one’s own limits, which has no comparable precedents in the history of the Church.”

Benedict’s resignation contains another lesson, perhaps less immediate, but no less important. Despite the existence of a distant precedent, the Pope’s resignation indicated a way of exercising primacy that opened up a new modality of ecumenical relationships. Indeed, the Orthodox Churches have always looked suspiciously upon the figure of the Bishop of Rome as a sort of monarch, installed in a hierarchical position above all of the other Bishops. And the modalities with which this ministry was exercised in the last centuries (in which attacks on the Church provoked a growing unity around the figure of the Pope, devotion to him, and the necessity of a strong principle of authority) certainly could have given this impression, thus representing a further obstacle to unity with the Orthodox, who were willing to recognize a certain primacy of the Bishop of Rome, even if only that of primus inter pares (first among equals). In the encyclical Ut unum sint, Pope John Paul II had already requested that new means be studied for the exercise of the Petrine ministry, prompted by an awareness of this ecumenical problem.

MUCH–DESIRED UNITY. Benedict XVI’s gesture of resignation contained a message for Orthodoxy, as well, and for all of the universal Church: unlike the spiritual gift imparted with the sacrament of Orders (fully received in episcopacy), the gifts received with primacy do not become a private patrimony of the person. They are bestowed upon the concrete person only in his relationship with the universal Church. Primacy is not a sacrament (which would position the person of the Pope sacramentally above the other Bishops), but a mission for the universal Church. In this sense, Benedict’s gesture shows us that, like all of the other Bishops, the Pope can resign from his service when circumstances render it necessary.

If Pope Benedict’s teaching presented itself explicitly as service to the Word of God (think of how Scripture permeated all of his catecheses, speeches, and documents), reaching out to the reticence of the Protestant denominations that accused the Petrine ministry of placing itself above the Gospel, then his last gesture represented a hand extended to the Orthodox, in the name of much-desired unity.

This latter intention did not go unobserved by Benedict’s successor. In fact, from the balcony in St. Peter’s Square, and with words that proved to be particularly meaningful, Francis introduced himself as the “Bishop of Rome,” Bishop of a Church “which presides in charity over all the Churches.” Later, in the apostolic exhortation Evangelii Gaudium, he affirmed, “Nor do I believe that the papal magisterium should be expected to offer a definitive or complete word on every question which affects the Church and the world. It is not advisable for the Pope to take the place of local Bishops in the discernment of every issue which arises in their territory. In this sense, I am conscious of the need to promote a sound ‘decentralization’” (n. 16).

"The certainty of Benedict XVI allows us to understand the novelty of Pope Francis."

THE MYSTERY CALLS US. Thus, we can better understand what Fr. Julián Carrón told us one year ago: “Not only his freedom, but also the Pope’s capacity to read reality, to understand the signs of the times, announces the presence of Christ” (la Repubblica). The Pope’s reason is one that is broadened by living with the event of Christ.

The Pope’s gesture of freedom and reading of reality, like the gestures of the prophets of Israel, is offered to the interpretation of men. This is the way in which the Mystery of God calls us, without forcing our freedom–as it happened to the Apostle John who, that morning, in front of an extraordinary catch and the indistinct face of that man over there on the shore, shouted, “It is the Lord!” In the measure in which each of us surrendered to the greatness of Benedict’s gesture and pronounced, in one way or another, the name of the Lord, he saw his certainty grow. Only those who experienced this in those historic days can “find that certainty that makes us truly free from the fears that ensnare us” (to quote Carrón’s article in la Repubblica once more).

What the Pope’s gesture placed before our eyes is certainty in the Presence of the Mystery of God that governs history. This certainty allows us to understand the novelty represented by Pope Francis, overcoming our attachment to our own images. The evangelist Mark tells us that, the day after the miracle in which Jesus fed 5,000 persons, the disciples were again afraid because “they had not understood the incident of the loaves. On the contrary, their hearts were hardened” (Mk 6:52). Benedict’s gesture helped–and helps–us to understand.