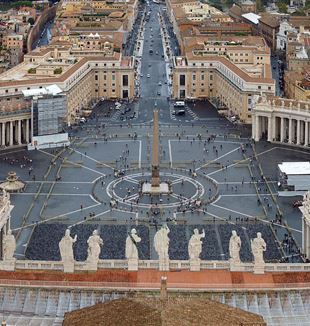 The sky over Rome is a May sky, with the fragrance of fresh roses and of Mary. But “beginnings are always difficult,” as the Jewish Midrash says. In the annual arrival of the grey Roman sirocco, the dusty wind that reaches this city from the Sahara, a few drops of rain fall on Saint Peter’s Square. What will it be like for the many movements and ecclesial associations to meet the Pope this time? In the crush to enter the Square, waving pink entry tickets, I think that this time is different from 1998 and 2006, not only because the Bishop of Rome is different, but because we have all changed. It is almost natural to run the risk of the been-there-done-that, of the already-seen-and-compartmentalized, of the not-so-new-anymore–a sensation, a nuance, barely accentuated. But when the big screens in the Square show footage from the past gatherings, my heart skips a beat when I see Fr. Giussani talk about the beggar as the “protagonist of history,” then kneel in front of John Paul II.

But everything is submerged in the sensation of a Square jam-packed with a throng that must be entertained; the crowd is passive, a bit Babelesque, a bit distracted, notwithstanding the efforts of Lorena Bianchetti (the emcee), who walks back and forth on the wide area in front of the Basilica, almost as if it were a stage. Is this perhaps the May 1st performance of the Papaboys, the Italian youth association always found at gatherings with the Pope? Is there a hyped-up audience and a performance to watch? And what kind? “A big applause...”

The jeep and the silence.This time is different; this time, too, something will happen but now, at the sirocco-blown beginning, it almost seems doubtful that something new will happen. Yes, the songs, the Gen Verde (a Focolare musical group), the witnesses of the Charismatic Renewal couples... but the great crowd in the travertine stone embrace of Gian Lorenzo Bernini is yet another crowd. Why am I here? Why are we here? There is something that we already know, that we already possess, but it does not satisfy us–or perhaps it does not really satisfy us precisely because we think we possess it. Every now and then there is a flash of lightning, a Hail Mary, the singing of the CL song “Povera Voce”–it is all truly moving, and unifies everyone. In fact, it is not a problem of acronyms, of flags–and there are a lot today. The list distributed by the press office contained over 150 group names. The Spirit has blown and generated in the Church many “present realities.” A spectacle, a gift, a Grace. This is evident. But do they have to agree, to harmonize? How? There are different styles, songs, and languages, perhaps all in search of an ecclesiastical, organizational constructed unity. What are they looking for–maybe a compromise, leadership, a head?

Then Pope Francis arrives. He enters the Square and already the clouds in the May sky are moving on. Rome does not betray: the toil begins to fade, the sirocco makes way for fresh air from the light West wind as the white jeep moves up to the area in front of the entrance to Saint Peter’s, a wind that seems to ripple the travertine columns, to lighten and make meaningful and truly religious our being together. This time it is different.

The crowd in the Square suddenly senses that something is truly happening and a new climate falls upon it. The distraction and the light confusion that seemed to befuddle us leave space for silence, a silence that is a gift. Francis clearly wants to embrace everyone, to greet each person; he straddles the jeep as if it were a motorcycle and he a reckless racer, such is the energy with which he throws himself into the crowd. At this point, Archbishop Rino Fisichella, President of the Pontifical Council for the New Evangelization, begins to speak, to explain to the Pope but also to all of us what all these realities have in common: “Telling people today that they cannot do without Christ–we need to be credible witnesses to this fact.” Then Fisichella introduces the procession of young people carrying the image of Our Lady, Salus populi romani, the salvation of the people of Rome. How tender and beautiful is the image of Saint Mary Major! The Square is no longer packed with a crowd, but with many women and men, children and elderly, who feel the simple fascination of the Marian popular devotion, in this place, in this city, which is at the same time also the whole world.

A great fortune. Suddenly, the evening seems to fly by, toward the clear sky behind the dome of Saint Peter’s. John Waters gives a very beautiful testimony about his life and faith, without too much emphasis on the historic and ecclesiastical role of the Movement of CL or of movements in general. This time it is different, as if a step had already been taken. There is a sharing by the brother of Shahbaz Bhatti, the Pakistani Minister for Minority Affairs who was brutally murdered by fundamentalists. “His great faith climbed the mountains of division that are so high in my country. It sowed a love higher than these mountains.”

And then, after four beautiful questions were asked, Francis spoke, giving the longest speech of his pontificate to date, a stupendous speech, from the heart. The beginning of his talk redeemed everything, clarified everything for us. There was Someone in that Square, in that May-time in Rome, who was waiting for us. Someone who loves us.

“We say we must seek God, go to Him and ask forgiveness, but when we go, He is waiting for us, He is there first! In Spanish we have a word that explains this well: primerear–the Lord always gets there before us, He gets there first, He is waiting for us!” When we fear or doubt, it is because we do not believe, deep down, that the Lord loves us. The “encounter” is crucial. Again, in the words of the Pope: “When we seek Him, we discover that He is waiting to welcome us, to offer us His love. And this fills your heart with such wonder that you can hardly believe it, and this is how your faith grows–through encounter with a Person, through encounter with the Lord. Some people will say, ‘No, I prefer to read about faith in books!’ It is important to read about faith, but look, on its own, this is not enough! What is important is our encounter with Jesus, our encounter with Him, and this is what gives you faith because He is the One who gives it to you!”

And he made a marvelous reference to the movements, telling us to open up, to throw ourselves wide open, to “go out.” “At this time of crisis, we cannot be concerned solely with ourselves, withdrawing into loneliness, discouragement, and a sense of powerlessness in the face of problems. Please do not withdraw into yourselves! This is a danger: we shut ourselves up in the parish, with our friends, within the movement, with the like-minded... but do you know what happens? When the Church becomes closed, she becomes an ailing Church, she falls ill! That is a danger. Nevertheless, we lock ourselves up in our parish, among our friends, in our movement, with people who think as we do... but do you know what happens? When the Church is closed, she falls sick, she falls sick. Think of a room that has been closed for a year. When you go into it, there is a smell of damp; many things are wrong with it. A Church closed in on Herself is the same, a sick Church. The Church must step outside Herself. To go where? To the outskirts of existence, wherever they may be, but she must step out. Jesus tells us: ‘Go into all the world! Go! Preach! Bear witness to the Gospel!’ (cf. Mk 16:15). But what happens if we step outside ourselves? The same as can happen to anyone who comes out of the house and onto the street: an accident. But I tell you, I far prefer a Church that has had a few accidents to a Church that has fallen sick from being closed. Go out, go out!”

A simple return. Go out to encounter others, risking, without fear. This time it was truly different. The afternoon of May 18th will remain a great metaphor for what happened and is happening to the Church, and also to the world. A new beginning, an immense Grace, a great fortune triggered by Benedict XVI’s gesture of dispossession. These two Popes inspire us to no longer lose time on ourselves, to no longer be self-occupied, but to become engaged in the New Evangelization, through a simple return to Jesus Christ, He who is always waiting for us, who loves us, and who–it is clearer than ever before–makes His Church exist and live. Because we all need to know that Someone is waiting for us.