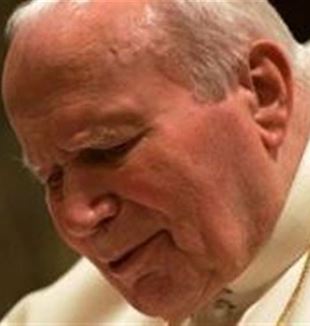 Pope Benedict XVI's announcement of the beatification of Pope John Paul II has of course also made me "very happy," as Pope Benedict himself said. The news has struck me at various levels of experience, so to speak. First, I was in awe before this demonstration of the Lord's Presence and care for His Church at a time of so much confusion, scandal, filth (Pope Benedict's own word), weakness of faith, relativism, and suppression of the desires that make us human. Now we can see, in the midst of all of this, Christ cared for His Church through the leadership, teachings, and gestures of a saint.
I remember my experience working on a PBS TV show on how Pope John Paul had impacted about ten or so cultural leaders from around the world, all of whom were struck by the impact and attraction of his presence. Now we can be certain of its Origin, of Christ, of Whom John Paul's humanity was a transparent sign.

And then I think about the times we were together, even before he became Pope. At that time, I felt I was in the presence of a man whose humanity was "heavy." I thought about one of the meanings of the Greek word doxa, which is often translated as "glory." Next to Cardinal Wojtyla I felt, that first time, the "weight of a glory" that had taken hold of his humanity. I don't know how else to describe it, but it was as if his humanity was the gate to a black hole in space with its unimaginable force of gravity. I concentrate on the first day I met him, since there were no "props" that could be contributing to this aura of glory that emanated from his presence: no white cassock, no window high in a castle, no choir–nothing but a simple man having a bowl of corn flakes.

That experience of "presence weight" was to be there each time we met afterwards when he was Pope. I just took it for granted and enjoyed it without trying to analyze it. It is important to realize that this was an experience I had in my heart, that there was nothing "special" about him. He was a simple man; his simplicity of heart was just that: simple, humorous, educated by the impact of reality, open to all new experiences.

Thinking about this after the announcement of his beatification, I thought: "My God, we must be surrounded by saints! And I bet they recognize each other without saying anything about it!" I have met Mother Theresa and I have seen her next to John Paul II, and I wonder now how many other saints could have been there in that audience with me… Maybe, some day, I dared to think, I could be one of them. Then I heard the saints and angels in heaven laughing…

Finally, I am thinking of the times I had the grace of concelebrating the Eucharist with Pope John Paul II, standing next to him at his invitation, proclaiming the Gospel, preparing the offering, pronouncing together with him the words of consecration, praying for the Pope and the Church in the Eucharistic Prayer, and being given by him the chalice with the Precious Blood to hold up as we pronounced the final words of the Eucharistic Prayer.

All of this more than once and my heart was still hardened, unable to experience the magnitude of this grace! It has been only through Fr. Giussani's charism and trying to follow the guidance of Fr. Carrón that I have finally begun to experience a little melting of my heart's resistance to this grace.

I pray now that, through the intercession in heaven of Blessed John Paul II, I might be able to continue walking along the path enlightened for me by Fr. Giussani and the communion with him to which I have been called.